Leader to the end: captain Morgan quells rowdy No. 10 celebrations 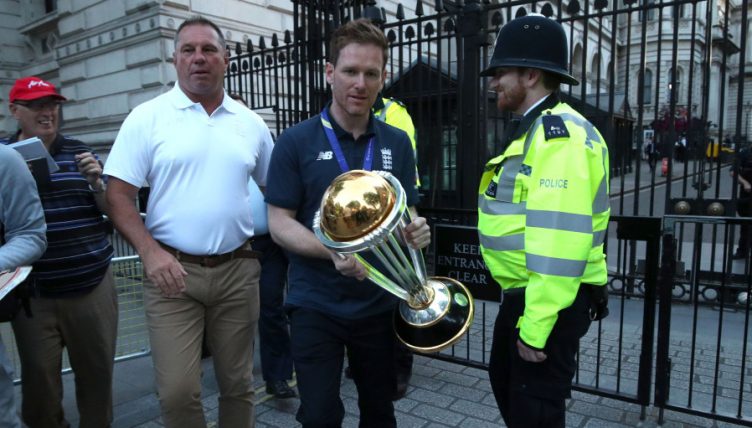 Keen to avoid the boisterous scenes of 2005, England captain Eoin Morgan quickly put a stop to any lairy behaviour as the team visited the Prime Minister on Monday evening, a report has claimed.

England won the 2019 Cricket World Cup in the most of dramatic of circumstances on Sunday; a victory that set up a meet with British Prime Minister Theresa May on Monday evening.

The last time an English cricket team met with the PM, things got a bit out of hand…

After their remarkable success in the 2005 Ashes series, the Test team were invited to 10 Downing Street for a get together with then PM Tony Blair.

To the dismay of the ECB, several regrettable incidents occurred including the captain Michael Vaughan asking the PM’s son, Euan, to acquire them alcohol and swing-bowler Matthew Hoggard personally insulting the PM himself.

A recent report by The Telegraph claims how it was Eoin Morgan who prevented similar scenes from developing this time around.

Members of the team are reported to have begun to sing the popular football chant “Allez, Allez, Allez” whilst in the reception area; a chant that often goes on to contain a swear word.

However, a few choice words from captain Morgan: “Look guys, we’ve got to calm it,” soon suppressed any chance of the celebrations spilling over.

A team source is reported to have told The Telegraph: “It was nothing like in 2005. Everything was in good spirits and it was a fantastic day for English cricket, starting with the children at the Oval and ending at Downing Street.

“There was certainly no danger of any rude words being uttered in that song and Eoin quickly told them to calm it.”