Home News Maharaj tunes up with List A five for 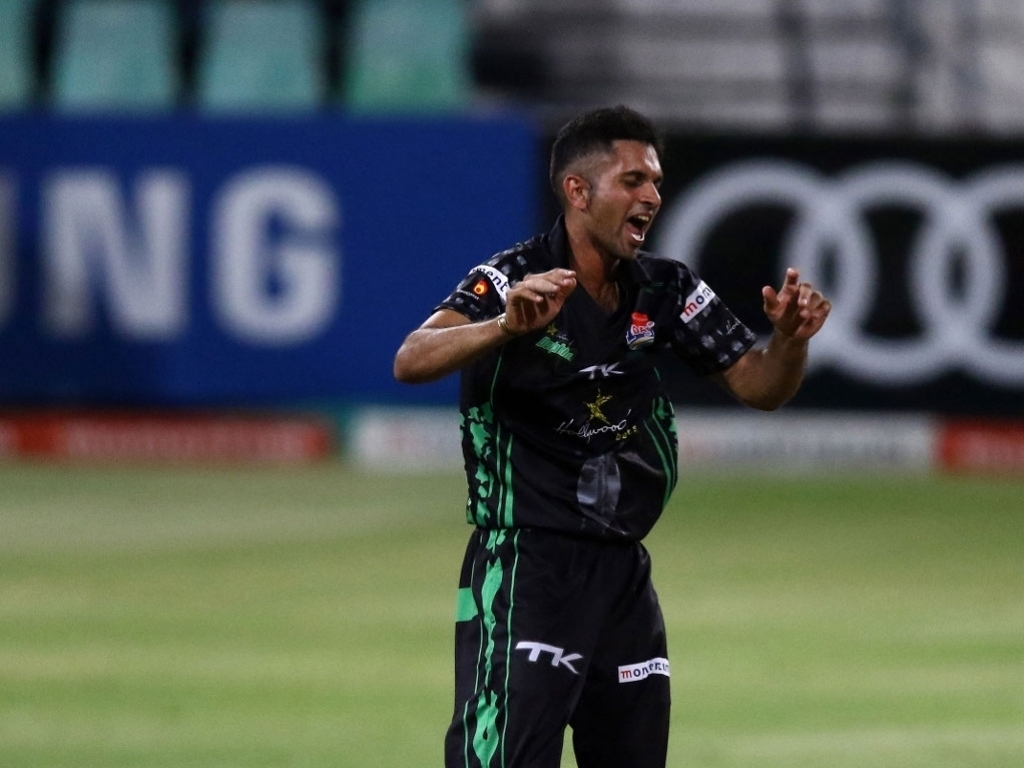 Proteas spinner Keshav Maharaj tuned up for the Test series in New Zealand with a List A career best against the Highveld Lions for the Dolphins.

Three wickets in the 46th over from the mercurial Rob Frylinck set up an exciting 27 run win for the Dolphins over the Highveld Lions on Friday night, with the result seeing the Dolphins record their second consecutive win of the 2017 Momentum One Day Cup.

Fylinck (4/43) was given the ball by captain Khaya Zondo with the Lions needing 33 from 30 balls with four wickets in hand. The veteran seamer proceeded to claim the wickets of Nono Pongolo, Aaron Phangiso and the already-set Temba Bavuma in the same over to consign the Lions to 216/9 at the start of the 47th over.

It took left-arm tweaker  Maharaj two deliveries to claim his best One Day Cup figures of 5/40 and hand the Dolphins what seemed an unlikely win just 15 minutes earlier.

Having been put in to bat, the Dolphins inning got off to a rocky start as they lost both openers before the total had got to 30 on what was a tricky surface to manage early on in their innings.

Cody Chetty and Vaughn van Jaarsveld – who was playing in his 150th List-A match – were also dismissed for under 20 with Chetty holing out to long off and Van Jaarsveld involved in an unnecessary run-out with captain Khaya Zondo.

With the Dolphins teetering at 48/4 Sibonelo Makhanya joined his captain at the crease and began to build a fluent, untroubled innings as the pair set a new Dolphins fifth-wicket partnership record with a crucial stand of 145 before Makhanya was run-out for an assured 82 from 83 balls.

Captain Zondo continued on his way before he was caught during the dying light of the Dolphins innings for a composed 74 from 98 deliveries.

All-rounder Calvin Savage played a vital cameo right at the death; bashing 16 from seven deliveries helping his side post a competitive 245/7 in their 50 overs.

With the ball the Dolphins were put under pressure early with Reeza Hendricks and Stephen Cook taking the attack to the bowlers putting on 49 in the first seven overs before Frylinck trapped the Lions skipper in front for 14.

Hendricks continued belligerently to a run-a-ball 40 before he became Maharaj’s first scalp – trapped in front. Rassie van der Dussen suffered the same fate as Hendricks playing around a straight ball from the Proteas left-arm spinner and he was adjudged to have been hit in front for 7.

The Lions then repaired the damage with Bavuma and Nicky van den Berg putting on 56 for the fourth wicket before Van den Berg was bowled by a beauty from Maharaj that gripped the surface and beat the outside edge and clattered into the middle and off stumps.

All the while Bavuma continued to make merry with some impressive running between the wickets. He lost keeper Mangaliso Mosehle and Bjorn Fortuin before he found a worthy partner in Nono Pongolo.

Bavuma went to a well-deserved half-century and Pongolo showed his worth with the willow as the duo chipped away at the deficit with some intelligent cricket and strong running between the wickets.

The match seemed to turn in a blink of an eye when Frylinck had Pongolo (31) caught at mid-on and then knicked off Phangiso in consecutive deliveries.

As long as Bavuma was there the Lions were in with a shout but when he played on off the last ball of the fateful 46th over the Lions’ chances floated away faster than the north-easter blowing across the ground.

Maharaj got Beuren Hendricks with the second ball of the 47th over as he holed out to Erwee on the deep mid-wicket fence, giving the Dolphins their second consecutive win of the campaign.

The Dolphins now travel to their second home in Pietermaritzburg as they prepare to take on the Cape Cobras on Sunday, 26 February.

The Dolphins encourage all supporters to come in blue to support the More Balls Than Most campaign on Sunday in Pietermaritzburg, which is trying to raise awareness about prostate and testicular cancer.