Home News Makhanya Magic gets the Dolphins home in Paarl

Makhanya Magic gets the Dolphins home in Paarl 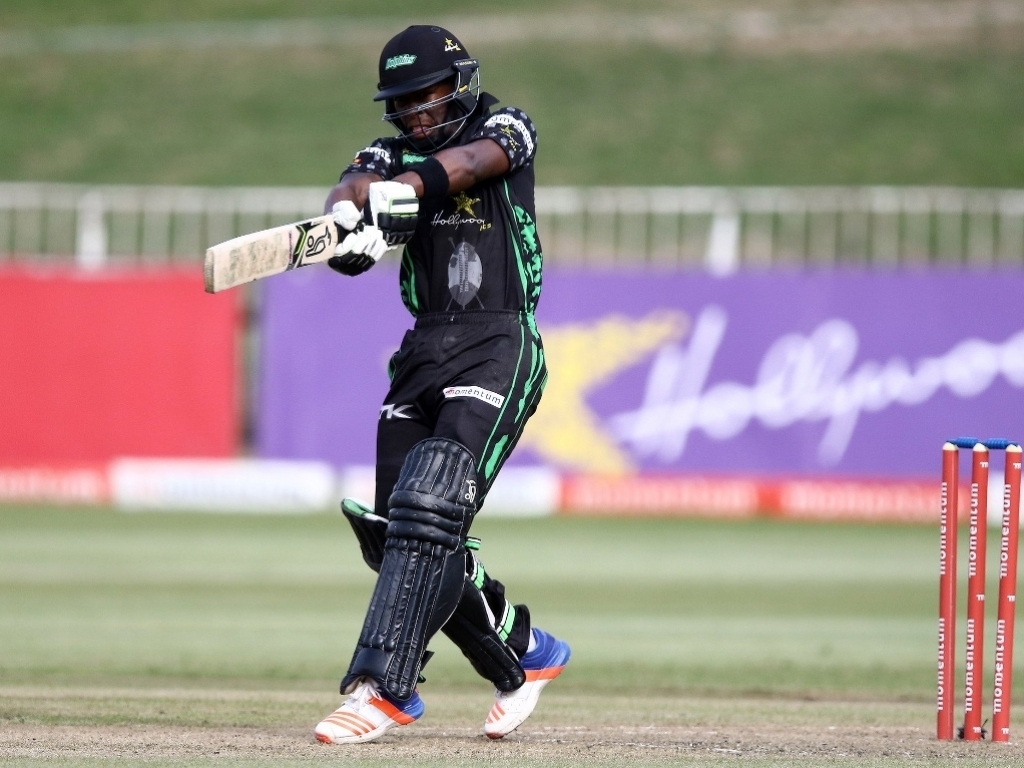 A brilliant seventh wicket partnership of 57 off 27 balls by Sibonelo Makhanya and Kyle Nipper saw the Dolphins go back to the top of the MODC, after a four wicket win over the Cape Cobras in Paarl on Wednesday.

Player-of-the-match Makhanya, who scored 55 from 38 balls, came in to bat at number six with the Dolphins in some strife at 147/4 chasing 272 for victory, however he and his captain Khaya Zondo rebuilt as they put on 63 from the fifth wicket before Zondo was out for 44.

After Rob Frylinck came and went for 6, the Dolphins needed 56 runs to win with 31 balls to get them with Kyle Nipper joining Makhanya in the middle on a dying wicket.

The pair rallied and ran well between the wickets with a few lusty blows from the bat of Nipper, who finished on a swash-buckling 32 from 18 balls. Nipper’s belligerence meant that Makhanya could plant the first delivery of the 50th over over mid-wicket for a boundary to take his team to a memorable win.

272 was the second highest chase at Boland Park in Momentum One Day Cup history and captain Khaya Zondo believed that it was gettable despite the Dolphins being uncharacteristically tacky in the field.

“We were disappointed in our fielding but we knew if we got a good start with the bat then the rest of the batsmen can play quite freely,” Zondo said after the game.

“We also knew that with our batting line-up if we batted our 300 balls we would be able to chase down 271 even on a surface like that.”

“It was going to be a difficult win but Sibz Makhanya and Kyle Nipper played unbelievably and it is great that we can now get over the line in those pressure situations.

Earlier in the day, the home side won the toss and elected to bat first on a used surface in a dry, hot Paarl, and after a steady start the Dolphins managed to pick up the wicket of Andrew Puttick with score on 42. Once Richard Levi got the pace of the wicket, he cashed in and passed another half-century at better than a run-a-ball.

After Subrayen picked up the wicket of Levi, Keegan Petersen and Dane Vilas put on 69 for the fourth wicket. The pair ran well between the wickets and put the fielders under pressure with both batsmen striking at over 80 runs per 100 balls and both passing the half century mark.

The Dolphins managed to reign in the Cobras towards the end of the innings as the hosts threatened to post something close to 290 as they restricted the hosts to 69 runs in the last 10 overs of their innings.

The wickets were shared amongst the Dolphins bowlers with Mthokozisi Shezi and Rabian Emgebrecht accounting for two Cobras scalps apiece, while Rob Frylinck, Sibonelo Makhanya and Prenelan Subrayen all picked up one wicket.

Despite the efforts from the Dolphins the Cobras managed to post a defendable 271/7 in fifty overs.

In the field the Dolphins would have been disappointed with their catching as the side proceeded to grass a number of chances ranging from straight-forward to more difficult.

Prenelan Subrayen provided a moment of brilliance to dismiss Aviwe Mgijima. Mgijima went hard at a Rabian Engelbrecht delivery and punched it towards mid-off where one felt it was going to clear Subrayen only for the youngster to leap into the air and take a spectacular catch.

The Dolphins did start well considering they lost Morné van Wyk in the second over. Vaughn van Jaarsveld and Sarel Erwee put on 107 for the second wicket before Erwee fell for 47.

When Van Jaarsveld followed soon after for a fluent 59 the Dolphins found themselves in a pickle at 110/3.

Senuran Muthusamy was busy at the wicket but he holed out off Eddie Leie for 17 from 23 and the Dolphins needed a stand to get them on track. That partnership came from Zondo and Makhanya, in a repeat of their stand against the Titans earlier in the campaign.

Some big temperament was the order of the day and despite a few chances from the Cobras fielders, Makhanya and Nipper showed impressive mettle at the death to get the Dolphins their fourth win of their Momentum One Day Cup campaign.