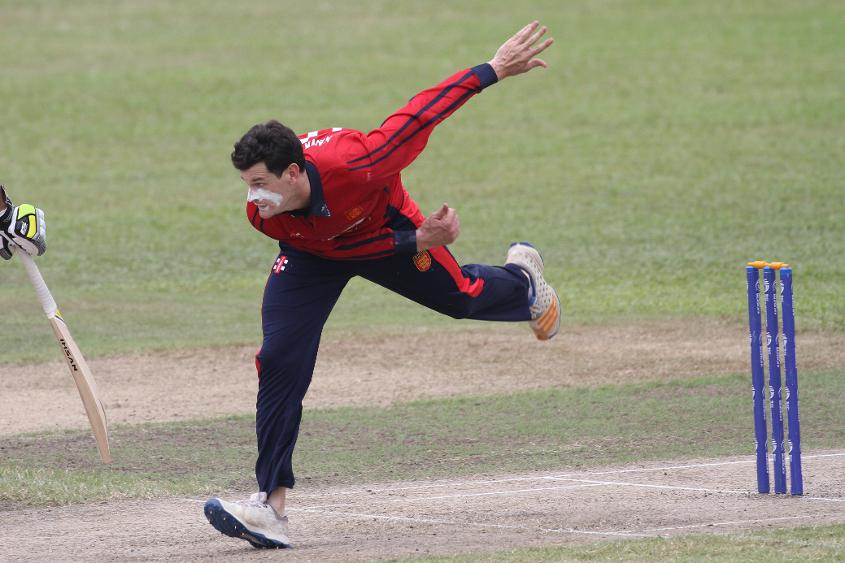 The hosts Malaysia made it two from two after they beat Vanuatu by 23 runs at the Kinrara Oval in Kuala Lumpar on day two of the ICC World Cricket League Division 4.

In the day’s other matches Denmark beat Jersey in a rain affected game by seven wickets (DLS method) at the Royal Selangor Club, while Uganda bounced back after an emphatic 189-run victory over Bermuda at UKM Cricket Oval.

The hosts produced another good performance, beating Vanuatu by 23 runs on day two of competition in Kuala Lumpar. Ahmed Faiz’s innings of 86 runs from 101 balls including 13 fours was the foundation for a defendable total for Malaysia. Shafiq Sharif (27) and Muhammad Syahadat (21) also chipped in with valuable runs to get the total to 196 all out in 43.5 overs. Vanuatu’s Apollinaire Stephen (2/31), Jelany Chilia (2/48), Nalin Nipiko (2/33) and Andrew Mansale (2-13) worked well together as a bowling unit, taking two wickets apiece.

In a rain affected match Denmark beat Jersey by seven wickets (DLS Method) with seven balls remaining at the Royal Selangor Club. Batting first Jersey’s partnership of Nathaniel Watkins 86 runs from 111 balls with eight fours and one six and Ben Stevens 69 runs from 95 balls including nine fours and two sixes seemed to have led Jersey to a very competitive total of 238 for six wickets in 50 overs. Bashir Shah (2-67), Saif Ahmad (2-36) and Anders Bulow (2-30) all took two wickets apiece for the Danes.

In reply, with rain looming the opening 82-run partnership of Freddie Klokker (39) and Zameer Khan (38) put Denmark in a strong position. With a rain interruption and both wickets falling as the opening pair chased a revised target, and Saif Ali Ahmad (15) also getting out, a tight finish was on the cards, but it was still enough as the Danes chased the target down with seven balls remaining.

Uganda notched their first win of the tournament after emphatically beating Bermuda by 189 runs. Captain Roger Musaka scored an impressive 97 runs from 135 balls including six fours at the top of the Ugandan order. Hamu Bagenda scored 55 runs from 95 balls, which included two fours, whilst helping the African side post a total of 249 runs for five wickets in 50 overs.

The chase for Bermuda never really got started as a flurry of wickets fell, leaving Bermuda on 21 runs for six wickets after 10.1 overs. Charles Trott top-scored for Bermuda with 17 runs and Dion Stovell (10) was the only other batsman to reach double figures. The outstanding bowling performance was from Mohammed Irfan, who took six wickets from 23 runs to lead Uganda to a 189-run victory.