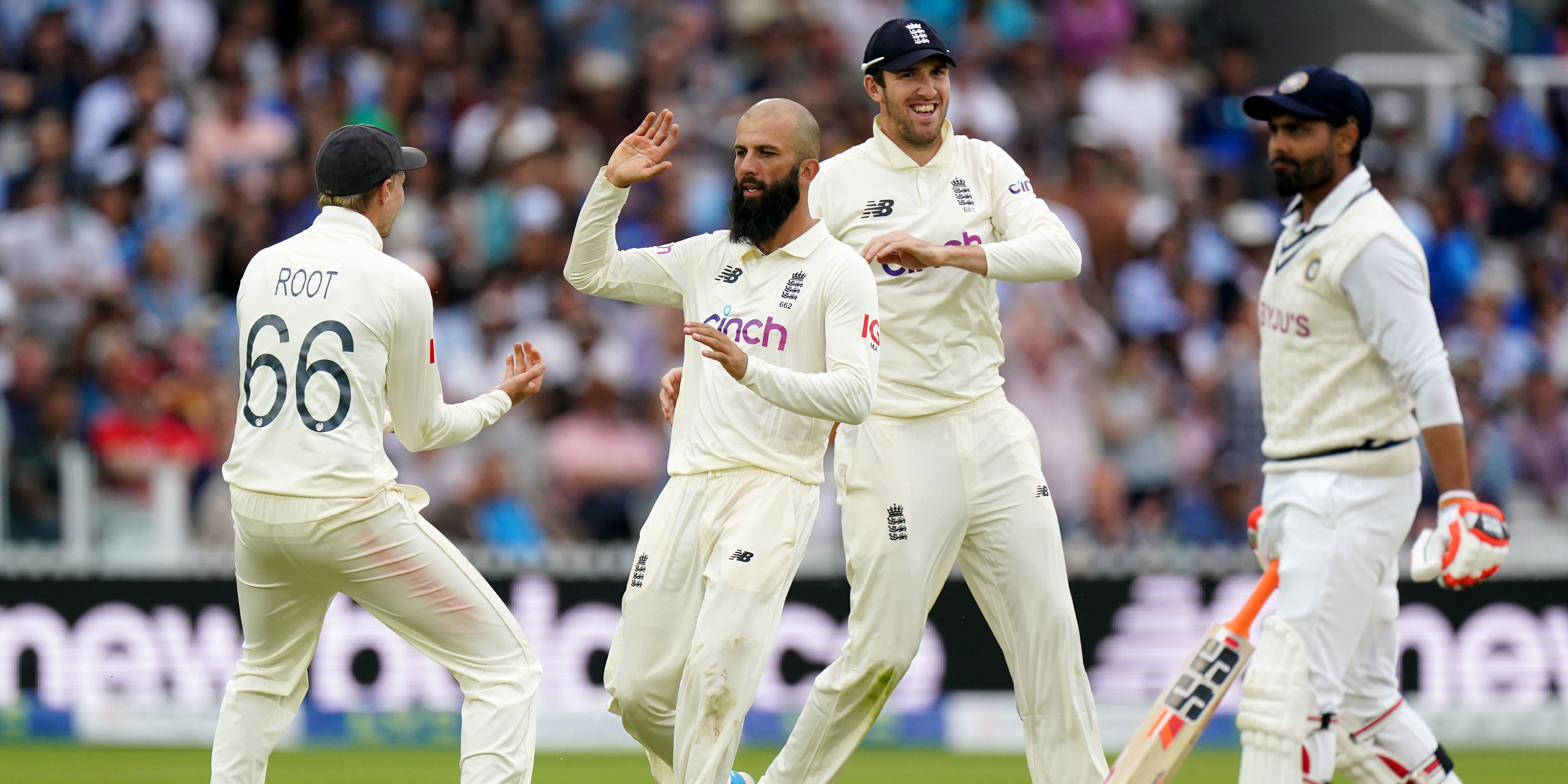 Mark Wood and Moeen Ali shared five wickets at Lord’s as England forced their way into a potentially match-winning position on day four of the second LV= Insurance Test against India.

Wood’s speed and Moeen’s spin did the damage as a passive Indian side laboured to 181 for six at stumps, a vulnerable lead of 154.

With a flimsy tail already exposed and the away balcony leading demonstrative calls to bring an early end to play for bad light, it was not hard to determine which side held the cards at the close.

The spinner dismissed top-scorer Ajinkya Rahane (61) and bowled Ravindra Jadeja with a beauty before the Indians got their wish to head for the safety of the pavilion. Earlier, Sam Curran had picked up the wicket of key man Virat Kohli.

The game was up for grabs at the start of play, England having been bowled out with a 27-run lead off the final ball of the third day. For the hosts, early wickets were the order of the day and it was Wood who stepped up to provide them.

With James Anderson somehow failing to generate a concrete chance through a stiff nine-over examination with the new ball and Ollie Robinson whipped out of the attack after just a couple, the Durham quick held the key.

He soon found the ideal combination of speed and accuracy to remove first-innings centurion Rahul, who nicked a 93mph ball in the channel.

Rohit cleared the remaining arrears in style by hooking Wood for six over fine leg – a stroke that was both physically and tactically brave, given the pace of the bowler and the presence of two boundary catchers on the leg side.

Root gave Wood the nod to go again by sending a third man out and, while Rohit ignored the next bouncer, the temptation proved too much. When Wood served up another dose of short stuff, Rohit launched into his second full-blooded hook and picked out the alert Moeen at long leg to leave his side two down with the scores level.

With Pujara stuck on nought for 35 balls, England were desperate enough to target Kohli that Root wasted an appeal on a fanciful lbw appeal against his opposite number.

There were some heated words from Kohli to Anderson, some of which were fruity enough to require an apology when they were broadcast over the stump microphones, but England had the last laugh.

Curran was the man to get him, sucking Kohli in with a couple of inswingers before clipping the edge with one that held its line. The all-rounder had been looking for a way into the match after a wicketless first innings and a golden duck with the bat, and this was a perfect calling card.

At 55 for three, India were only 28 ahead and proceeded to take the most pragmatic approach possible, sucking all the heat out of the situation. Pujara and Rahane eked out 12 runs in the afternoon’s first 10 overs and 19 in the first hour.

The crowd began to shower Pujara with ironic cheers, roaring his 50th and 100th deliveries as though they were authentic landmarks and bellowing their approval when he found the boundary ropes for the first time after 119 balls.

At tea the score had trickled along to 105 for three, a slow-cooked lead of 78. England kept plugging away after tea but must have felt their window was closing when Jonny Bairstow spilled Rahane on 31 after a poorly placed cut off Moeen.

Pujara brought up the century stand with a rare attacking pull off Wood but saw his 206-ball vigil ended seconds later. It was a viperish delivery from Wood, rising menacingly from back of a length and thudding the top glove on its way through to Root at slip.

The seamer’s spell was cut short soon after when he injured his shoulder crashing into the advertising boards at fine-leg, but Moeen was ready to pick up the baton.

Rahane lacked the room he needed to cut and feathered an edge through to Jos Buttler. Events were moving briskly now and Moeen pushed the accelerator when he flicked the top of Ravindra Jadeja’s off stump with a ripper that drifted in and spun away.

England were more than happy to eschew the new ball and stick with spin, but in fading light the match officials finally gave an animated Kohli what he wanted.