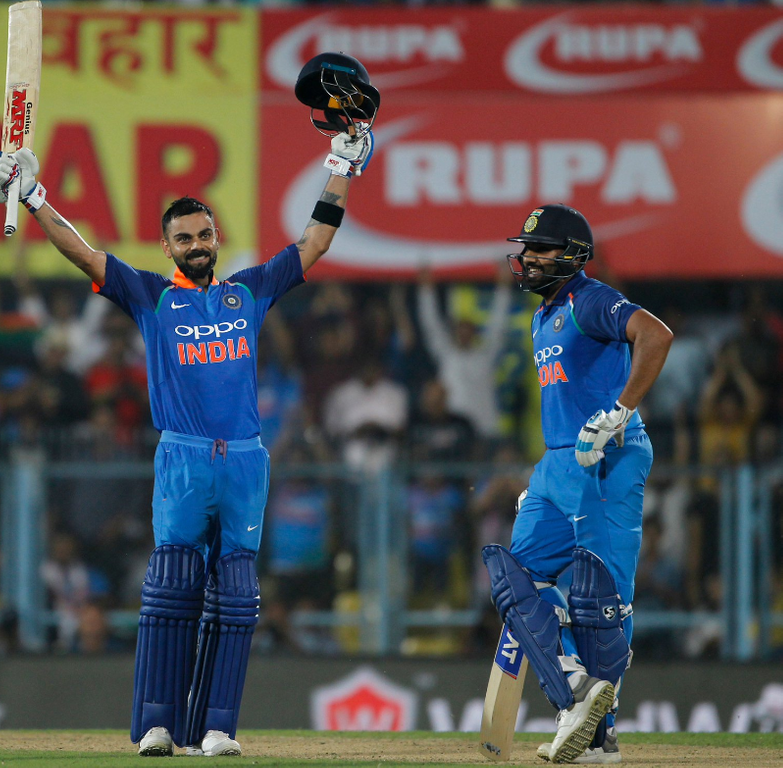 A sublime century from captain Virat Kohli and a crafty unbeaten ton by Rohit Sharma saw India cruise to a comfortable eight-wicket victory over the West Indies in the first of five ODIs in Guwahati on Sunday.

The experienced duo put on 246 for the second wicket after debutant seamer Oshane Thomas (1-83) accounted for opener Shikhar Dhawan (4) in the second over.

Kohli and Rohit batted for 31 overs and kept punishing the Windies bowlers with some masterful strokes as the home team’s skipper started out as the more aggressive of the two batsmen.

The 29-year-old Kohli continued to show why he is rated as arguably the best batsman in world cricket as he went to his 36th ODI century in his 212th game.

Rohit for his part was not far off his captain and hit his 20th hundred in ODI cricket and also finished off the match with a straight six in the 43rd over with Ambati Rayudu (22 not out) at the other end.

Earlier, Shimron Hetmyer struck his third ODI century in his 13th appearance as the Windies made their way to what seemed a competitive score of 322/8 in their 50 overs.

Opening batsman Kieran Powell gave the visitors a good start after they were sent in to bat with a 39-ball 51.

India’s leg-spinner Yuzvendra Chahal put the brakes on the middle overs and also took 3-41 in his 10 overs as the Windies could, and perhaps, should have got a bigger total.

The second ODI of the series will take place in Visakhapatnam on Wednesday.