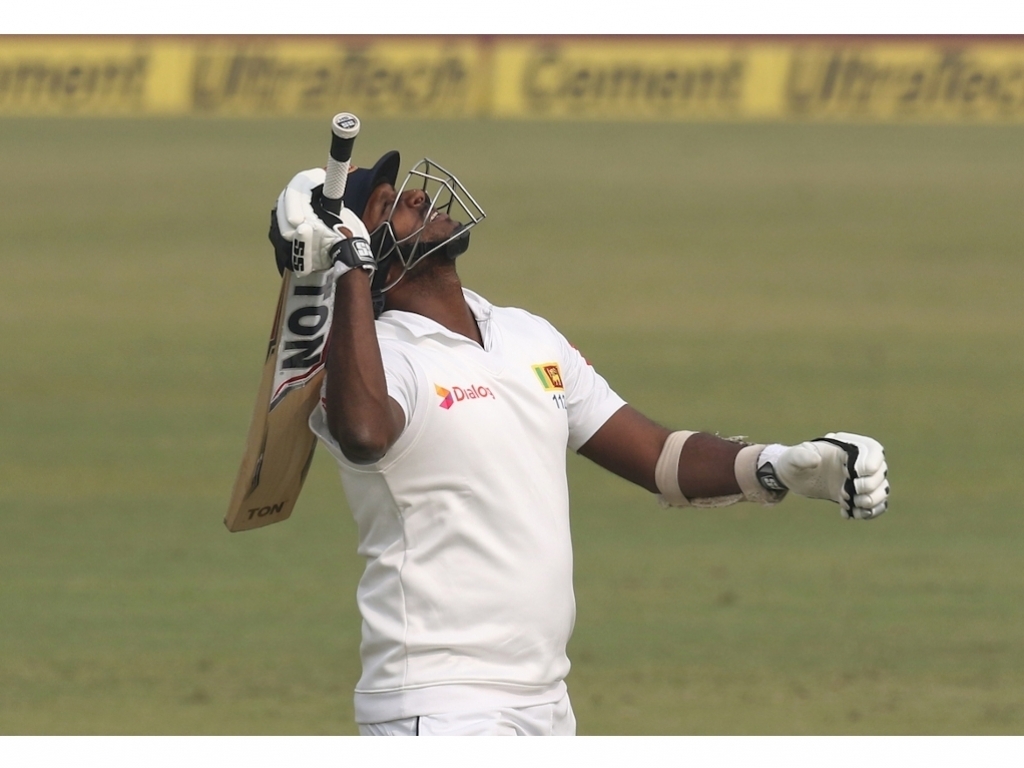 Sri Lanka middle-order batsman Angelo Mathews has downplayed the pressure that was on him to get a big score having ended his long wait for another Test century.

Mathews has endured a difficult last 18 months or so struggling for form and fitness and losing the captaincy across all three formats.

The top brass have backed him to come good though and he and Dinesh Chandimal produced some fight on day three of the third Test against India putting on 181 for the fourth wicket.

The wicket of Mathews would precede another lower order collapse but did enough to allow Sri Lanka to avoid the follow on.

Chandimal toughed it out to the close and would earn the praise of the former skipper Mathews for his gritty knock.

Mathews last scored a hundred in the longest format back in 2015 when he reached three figures against India in Colombo and now has eight Test centuries to his name.

Speaking after play on day three at the Feroz Shah Kotla stadium Mathews said: “It was not the most fluent innings, but I had to work extremely hard.”

The skipper was dropped multiple times early on in his innings and looked to make the most of that good fortune.

He added: “Had a bit of luck as well, end of the day, runs matter. I knew I was hitting the ball well, it’s just that I was disappointed at not converting my starts. Once I got in, I told himself here that I’ll carry on.”

Mathews feels that every time he puts on his Sri Lanka kit he is under pressure to perform for the fans back home.

Mathews said: “As cricketers and as batsmen, you’re always under pressure. There’s no game where I haven’t been under pressure. I like those challenges, you have go out there and enjoy yourselves.”

“Few more wickets in hand would’ve been ideal. Chandi was outstanding, he worked hard and so fluent as well. It was a pleasure watching him bat from the other end.

“Little disappointed with our position. It was a good wicket, yes there was the odd ball taking turn but no real danger. Obviously it will start turning a little more as we go into the fourth and fifth day.”

Sri Lanka will need to milk as many runs as they can from their tenth wicket tomorrow morning and ensure they don’t allow India to score quickly and force a result.

The tourists are 356 for 9 overnight trailing India by 180 runs with the pitch showing early signs of being tough to bat on come day five.