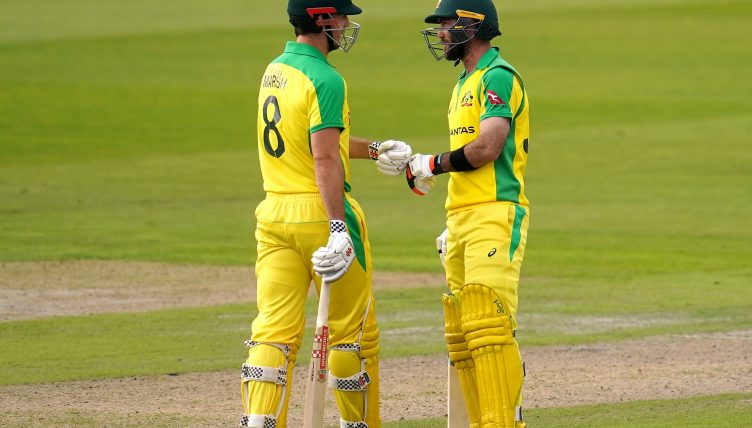 A century stand between Glenn Maxwell and Mitch Marsh carried Australia to 294 for nine in the first one-day international against England.

Home captain Eoin Morgan invited the tourists to bat first at Emirates Old Trafford as the rivals met for the 150th time in the format – with England reuniting nine of the XI who won last year’s World Cup final.

At 123 for five midway through the innings, Australia looked in trouble but an explosive 77 from Maxwell and Marsh’s hard-working 73 restored balance and left the hosts in need of a record chase in Manchester.

While Maxwell provided the thrills Marsh played the kind of anchoring knock Steve Smith might have produced had he not been left out as a precaution following a blow to the head in training on Thursday.

England saw pacemen Jofra Archer and Mark Wood take six wickets each, as both men returned to 50-over for the first time since the World Cup.

Australia found themselves on the back foot almost immediately as the threat of David Warner was extinguished early on. He worked just six runs off his first 13 balls before Archer steamrollered his stumps, finding good pace from a full length and nipping the ball from middle to off.

That would usually have signalled the arrival of Smith at number three, but in his absence it was Marcus Stoinis who joined skipper Aaron Finch. Together they put on 30 before Wood’s first delivery – fast, skiddy and full – saw Stoinis nick a drive to Jos Buttler.

At the end of the 10-over powerplay Australia had reached 46, an uneven return for a pair of significant setbacks.

Stoinis made a lively 43 and was threatening to build a significant innings until Wood struck again. It was a similar dismissal to Finch’s, perhaps a little faster, a little wider and requiring a more athletic catch from Buttler, but the result was the same: more trouble for Australia.

Adil Rashid’s introduction at 91 for three offered him the chance to attack and he grasped it, snapping up Marnus Labuschagne lbw with a googly for 21 and picking up Alex Carey courtesy of a top-edged sweep to short fine-leg. At 123 for five, Marsh and Maxwell had a hefty job ahead and they held up their end.

Marsh settled into an anchoring role, while Maxwell expressed himself – loosening up by swatting a Rashid long-hop for the first six of the day in the 30th over. Substitute fielder Tom Banton might have been better placed and was only able to help the shot over the ropes.

England allowed the partnership to settle in, failing to create a chance in the next 10 overs as Maxwell worked through the gears. Marsh was first to reach 50 in 75 balls but Maxwell needed 32 fewer to follow him.

Back-to-back sixes off Archer – one in the slot, one a wayward full toss – looked to set up a grandstand finish but a slower ball from the seamer, dragged on by Maxwell, was crucial. Archer added Pat Cummins with a knuckle ball three deliveries later, before Wood halted Marsh’s progress with a plumb lbw.

Despite the setbacks, Australia still managed to pick up 76 off the last 10 overs, Mitch Starc capping things with six off the final ball after crossing when Chris Woakes had Adam Zampa caught and bowled.