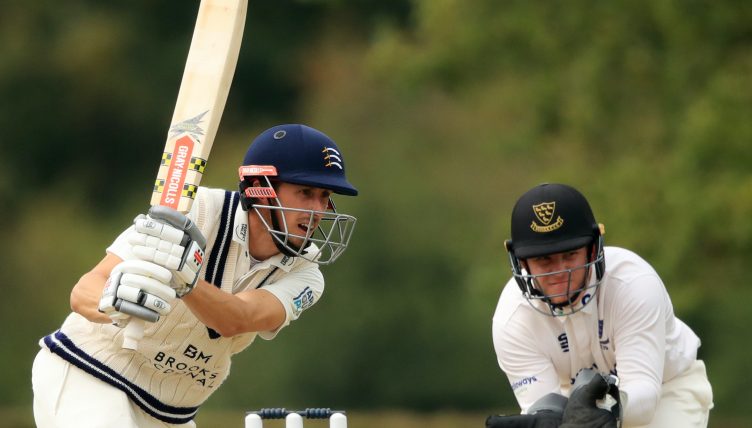 Wicketkeeper Simpson and young all-rounder Andersson shared an unbroken sixth-wicket stand of 63 to see the hosts to a winning target of 193 at the end of a fluctuating day.

Ollie Robinson, who took four wickets for 50, including a spell of three for three in 10 balls, had threatened to give Sussex the win, but they were left to rue dropped catches at slip to reprieve both Andersson (27 not out) and Simpson (32 not out) in a dramatic finale.

Marchant De Lange scored the fastest first-class century for Glamorgan as Northamptonshire fell victim to another lower-order fightback in their Central Group clash at Wantage Road.

Glamorgan recovered from 60 for eight to 261 in their second innings to leave Northamptonshire a target of 189 to win, with the home side closing day three on 62 for one.

De Lange needed just 62 balls to reach his century, going on to make a career-best 113, with six fours and nine sixes.

Sir Alastair Cook added yet another first-class century to his tally but rain looks set to leave Essex and Hampshire to settle for a draw.

He ended on an unbeaten 129, with Essex 249 for three, with play concluding at lunch due to torrential rain making an already wet outfield sodden.

Daryl Mitchell completed his first hundred against Warwickshire in first-class cricket as Worcestershire secured four batting points to boost their hopes of qualifying from the Central Group.

Half-centuries from Jack Haynes and Tom Fell plus late momentum provided by Ben Cox and Ed Barnard built on the efforts of Mitchell and fellow opener Jake Libby and enabled Worcestershire, who are vying with Somerset for top spot, to total 410 for seven in their 120 overs.

The visitors made a solid start to their reply with openers Will Rhodes and Rob Yates putting on an unbroken 68 either side of a short break for bad light.

Rhodes (42 not out) and Yates (21 not out) experienced few problems in the 23 overs possible in Warwickshire’s second innings as they wiped out their side’s first-innings deficit and earned a lead of 13.

Craig Overton and Josh Davey continued to wreak havoc with Gloucestershire’s batting as Somerset were defied by the weather at Taunton.

What little play there was saw the visitors stumble from 14 for three at the start of play to 63 for eight, chasing an unlikely 322 to win.

Overton and Davey ended the day with identical figures of four for 25 when umpires Ian Blackwell and Paul Baldwin deemed the light too poor to continue with a possible five overs remaining.

Adam Lyth completed his first century across all formats since September 2018 as Yorkshire’s Roses clash with Lancashire headed for a draw at Emerald Headingley.

The visitors produced a mixed response to the hosts’ first-innings 260 as both sides chased bonus points in their penultimate round North Group fixture.

Lancashire closed on 195 for five – just shy of a first batting point and 65 in arrears.

Ackermann finished the day unbeaten on 58, the Dutch international’s fourth half-century in eight innings in the competition this season, as the Foxes finished the day leading by 22 runs on 143 for three.

Nottinghamshire hit 122 runs but lost six wickets in an exciting morning session before declaring with a lead of 121.

Rikki Clarke took three wickets for just one run in his first three overs and five for 15 overall to haul Surrey back into their clash with Kent at the Kia Oval.

Clarke and Sam Curran (three for 35) then came to the fore as Kent collapsed initially from 63 for one to 69 for five in mid-afternoon and then again from 100 for five after a mini-recovery was staged by Grant Stewart and Marcus O’Riordan.

By tea Kent had slipped to 102 for eight and, after a short rain delay, Curran had Matt Milnes lbw for seven before rain returned early in the evening session and the visitors closed on 118 for nine – a lead of 182.

Derbyshire’s batsmen kept the North Group leaders in contention for a place in the final on the third day of their match against Durham at Emirates Riverside.

A century for Luis Reece and fifties from skipper Billy Godleman and Wayne Madsen helped Derbyshire pocket four batting points as they closed on 355 for four in reply to Durham’s 337 for nine declared.

Godleman passed 9,000 first-class runs and some late acceleration from Leus Du Plooy (40) and Matt Critchley (46 not out) completed a productive day for Derbyshire.