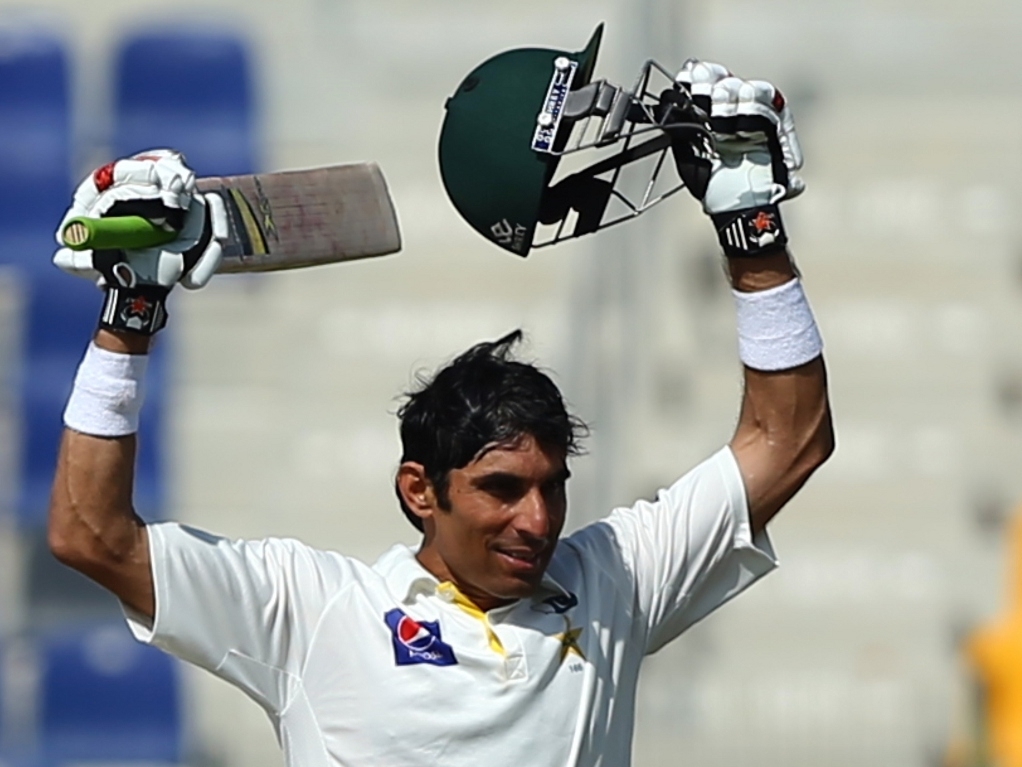 Pakistan captain Misbah-ul-Haq was thrilled with his record-equaling effort in Abu Dhabi, but said he was not worthy of the comparisons to Sri Viv Richards, his Test century record partner.

Misbah scored his century against Australia on Sunday off 56 balls, equaling the West Indies legend's 28-year record, as Pakistan put up a target of 603. It was Misbah's second ton of the match.

Misbah said: "I think it's [the hundred] the biggest honour for me because I am nowhere near him [Richards]. But scoring a hundred in similar deliveries I think that's something I am going to remember for my whole life.

"Somebody [from the dressing room] just ran to me when I was on 80 off 45 balls and said the record is 56 balls. In either case, I was just trying to hit every ball. So it didn't make any difference.

"We were in a situation in which we had to get as many runs as we could in minimum time. Another thought was to help Azhar Ali score his second hundred and I wanted to try and score as many runs for the team so that there could be more pressure on the opposition and it would put them out of the game.

"This was a good chance and I don't get these chances easily. So just go and swing hard."

He admitted he needed the score, given the pressure he was under ahead of the World Cup and people questioning his captaincy in the ODI side: "This is an important innings for me, given the situation before and right before the World Cup.

"It's an important time for our team and, at this time, to get into this kind of form, to score runs and specially the rest of the batsmen, the kind of performances they are giving, as a unit the way we are performing, in my opinion, we needed this badly.

"And there is no greater incentive at this time for me or the team because if we gain confidence like this before the World Cup, it will really help us.

"It's a question of belief and determination. Our performances in the last two-three series were disappointing. But everyone tried to come out of it, as individuals, and as a team, and this is a result of the fact that the whole team, the batsmen, the bowlers is in good form and are giving good performances.

"The team was hurt by their losses and they wanted to get out of it and prove that we are a good team and a good bunch of individuals who can perform at this level."

The skipper was also delighted with his batting partner's efforts, as Azhar Ali also recorded his second ton of the game. It was only the second time in Test history that two batsmen in the same team scored twin tons in a game.

He said of the young number three: "I rate him highly as a batsman and I give him the credit for our performances because since he has started playing at No. 3, the kind of partnerships he gives makes it easier for us to go and play.

"He plays with determination and takes the burden – in case Pakistan lose the openers early – and gets the team out from the crisis with bat. And then he fields all the day in the close catching positions, which is tough.

"So he does the efforts for the team and we exactly need such players in the side."