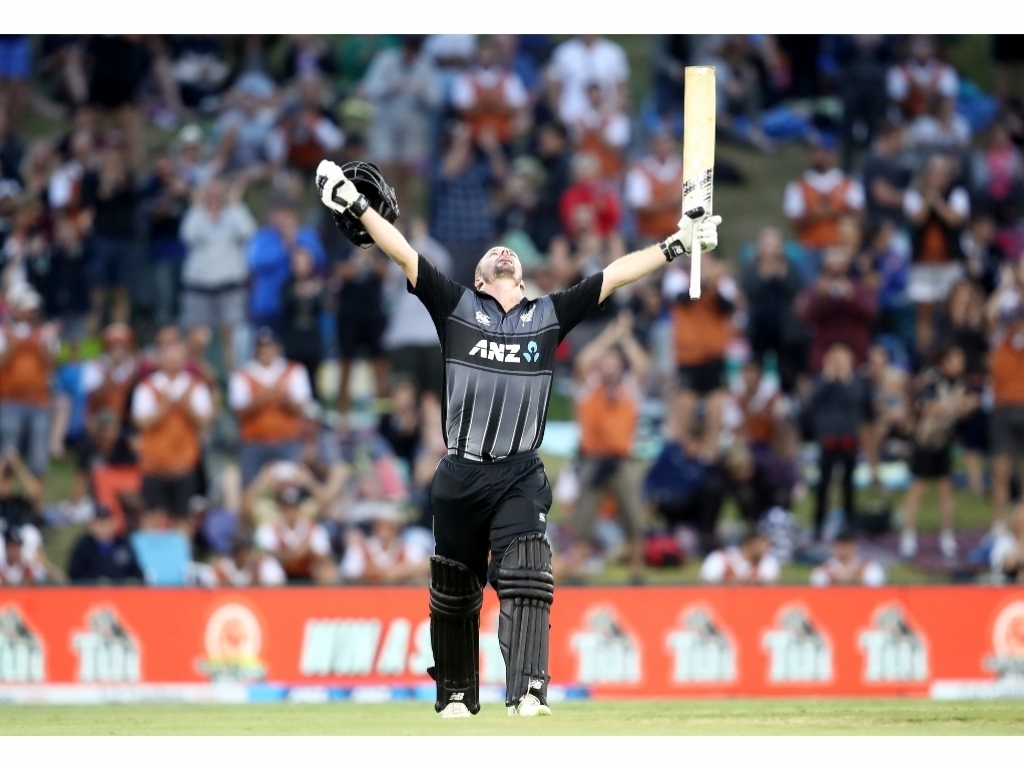 Colin Munro hammered a record third T20I century as New Zealand defeated West Indies by 119 runs in the third T20I at the Bay Oval in Mount Maunganui on Wednesday.

Victory meant they clinched the three-match series 2-0, after the second game at the same venue was abandoned due to rain.

Munro’s 33-ball 104, along with a timely half-century from Martin Guptill (38-ball 63), helped New Zealand post 243 for 5, the highest T20I total on New Zealand soil. In their chase, West Indies lost early wickets and struggled to pose a threat thereafter, eventually ending at 124 for 9, with Shai Hope not taking the field in the second due to a shoulder injury sustained early in the game.

After opting to bat, Munro carried on from where he left off on Monday, when he scored a 23-ball 66 before the match was abandoned. He went one better today, his innings comprising three fours and ten sixes. In becoming the only batsman to score three hundreds in the format, he has left behind the likes of Rohit Sharma, Chris Gayle, and Brendon McCullum, all of whom have hit two.

The opening partnership of 136 runs in 11.3 overs between Munro and Guptill laid the platform for the home side. The two ensured the West Indies bowlers had a night to forget, with Ryad Emrit, making his T20I debut, taken for 16 runs in his first over, including consecutive sixes by Munro. It was indicative of the degree of the assault that Samuel Badree, West Indies’ most experienced T20I bowler, conceded 51 off his four overs.

The breakthrough eventually came in the 12th over, with Guptill caught behind off Emrit. There was little respite for West Indies though, with Munro carrying on without a care. There were consecutive sixes off Badree in the next over and two more off Jerome Taylor in the 15th over. Munro went on to complete his century off just 47 balls, and even though he holed out shortly thereafter, cameos from Kane Williamson (19 off 9 balls) and Tom Bruce (23 off 14) amply hurt West Indies.

The burden of the run chase rested heavily on Gayle’s shoulders after Chadwick Walton was dismissed off the first ball, but he was sent back soon after while trying to evade a Tim Southee bouncer. The ball caught Gayle’s gloves and lobbed up in the air, allowing Glenn Phillips an easy catch behind the stumps.

Andre Fletcher and Rovman Powell added 41 runs in the next three overs before Anaru Kitchen got Powell caught by Williamson at mid-off. When Shimron Hetmyer was run out in the fifth over, West Indies were in dire straits at 49 for 4.

Fletcher counter-attacked thereafter, taking Kitchen for 20 in the next over, with two fours and as many sixes, but two tight overs by spin duo of Ish Sodhi and Mitchell Santner built the pressure, leading to Fletcher’s downfall in the ninth over after he failed to read a googly. There was little hope for West Indies after that as they lost five wickets for just 37 runs.