Mfoza dreams of representing the Proteas 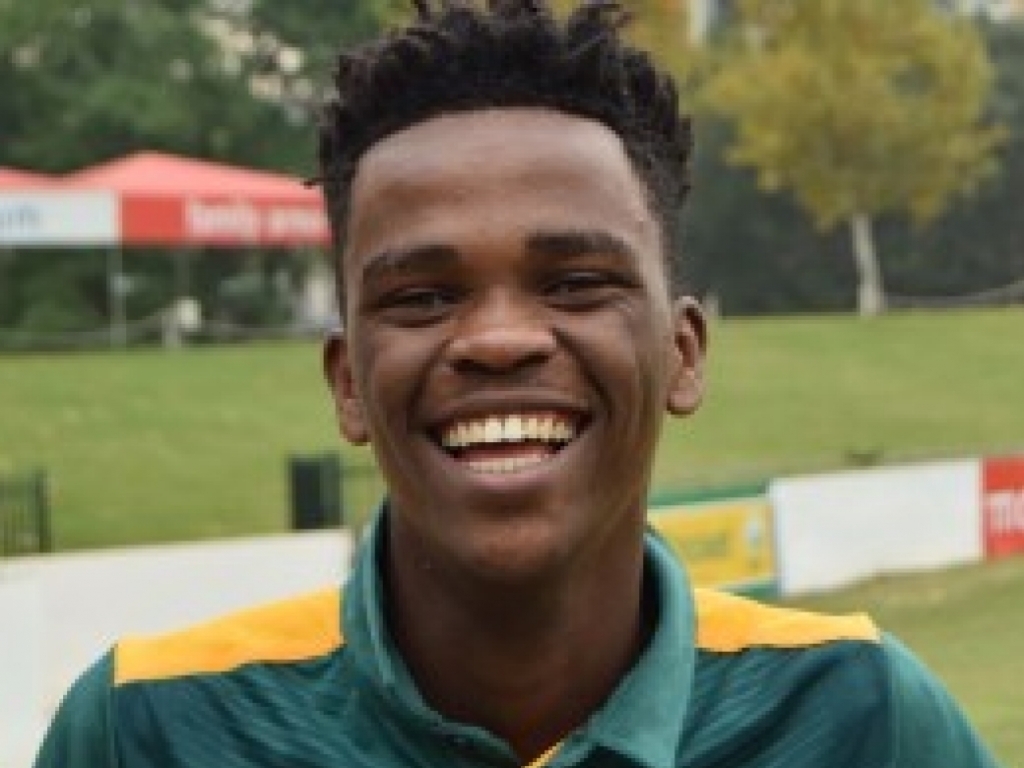 Former South African U19 cricketer Nduduzo Mfoza is forging a new life for himself in Pietermaritzburg that combines his love of cricket with his university studies – and he believes it would not have been possible had it not been for a cricket bursary he was awarded in 2012.

The talented left arm spinner, who is on a semi-professional contract with the KZN Inland Cricket Union while a first-year student at UKZN, credits a bursary he received after the 2012 KwaZulu-Natal Sunfoil Township Tournament for his successes.

“I think getting the bursary has meant a lot to me,” said the 20-year-old while sitting in front of the grandstand at the Oval, the headquarters of the Inland Cricket Union. “Without that bursary I wouldn’t be where I am today.

“Before I got the bursary to study at Glenwood in Durban, I was in the development structure and we played against other schools. But things changed after that.

“I am now part of the KZN Inland setup as a semi-professional, and I am studying sports management at UKZN.

“I don’t think I would be at university if it had not been for the bursary. I would not have been where I am now, because that is when everything started for me. And I would not have made SA under-19 if I had not gone to Glenwood.”

But things were not easy for the Zulu speaker at his new school.

“It was very difficult for me to adapt. I had come from a school where we would only talk Zulu and moving to Glenwood was challenging. The way they would do everything was different to what I was used to.

“It took me about a year to adapt.”

However, there was one area where the Grade 9 pupil slotted in easily: on the cricket field.

“I was also in the sports academy at Glenwood until matric. I think that helped us a lot with fitness and skills. It helped me because it gave me more coaching.”

After moving to his new school, Mfoza began to shine and every year since 2012 he was chosen for the KZN U17, U19 and then Cubs teams until 2015 when he was the only KZN player in the SA under-19 squad that took on Bangladesh in a series in Pietermaritzburg and Durban.

Mfoza made his debut in the fourth international at The Oval in Pietermaritzburg where he was the only South African bowler to complete his full allotment of 10 overs.

Despite a rampant Bangladeshi batting line-up he kept things tight, only going for 3.5 runs to the over.

In 2015 Mfoza was also selected to take part in the specialist spin bowling camp at the Cricket South Africa Centre of Excellence in Pretoria where, alongside his hero, Proteas player and fellow left-arm spinner Aaron Phangiso, he was coached by some of the world’s best coaches.

And what about the future?

Mfoza has no doubt what the future holds: “I will play for the Proteas – that is my biggest dream.”

Shoaib Moosa, the Chief Commercial Officer from the Willowton Group, said the Township Cricket initiative was making great inroads into developing the sport and Mfoza is proof of this.

“We are convinced this initiative is helping the game of cricket become more popular in townships across South Africa, where we feel it matters the most.

“With the right support we believe cricket will continue to be a positive force in the lives of players such as Nduduzo.

“He, and many others we have supported over the years, now have the chance to make a career out of cricket because of this programme.

“That has to be a good thing for many young sports stars who would otherwise never have had an opportunity to showcase and develop their talents,” added Moosa.

Township and rural development manager KZN, Sanelisiwe Kuzwayo said, “When Nduduzo joined Glenwood High School he surprised us as he adapted so well, his schooling and education improved consistently.”

“A very shy KwaNdengezi young man became a star in Glenwood High when he made first team from as early as grade 10, it has never amazed me to see him going easily up the ranks to his passion and dedication in cricket.”

“I believe Mfoza have full potential to become one of the Dolphins and Protea player in the future,” concluded Kuzwayo