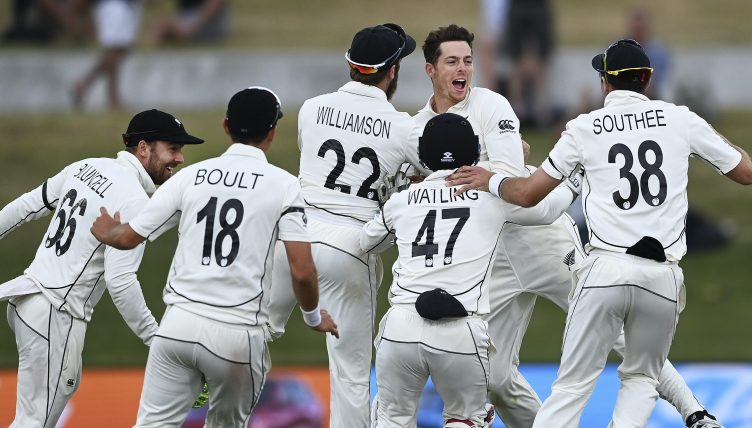 New Zealand became the world’s top-ranked Test nation for the first time with a dramatic victory after a stunning collapse by Pakistan in the final session of the first Test in Mount Maunganui on Wednesday.

Resuming on 71 for three in pursuit of an unlikely 373 to win, the visitors lost only one wicket through two-and-a-half sessions, moving to 240 for four in the last session with 25 overs left.

The prospect of a draw loomed large thanks to a defiant fifth-wicket partnership of 165 runs in 63 painstaking overs from Fawad Alam – who took his overnight 21 to a superb 102 – and captain Mohammad Rizwan, who compiled 60 off 191 balls.

But when paceman Kyle Jamieson finally had Rizwan trapped lbw, it started an implosion in which Pakistan lost their last six wickets for 31 runs in 21.3 overs, ultimately being dismissed for 271 as New Zealand won by 101 runs.

Alam was dismissed three overs after his skipper, caught behind off medium pacer Neil Wagner after nearly five hours at the crease, and the Pakistan tail crumbled in dizzying fashion thereafter, with New Zealand’s five main bowlers each ending with two wickets apiece.

New Zealand not only took a 1-0 lead in the two-match series but earned enough points to topple neighbours Australia from the top of the ICC’s Test rankings.

The Black Caps thought they had at least claimed a share of top spot earlier this summer after a series win against the West Indies, but a clarification from the ICC had them stuck in second place by the barest of margins.

New Zealand have a chance to enhance their status in the second Test from January 2, while Australia have two Tests left of their current home series against India, currently level at 1-1.

Captain Kane Williamson, who took player of the match for his 129 after New Zealand were put in to bat, praised his bowlers for their determination and persistence.

“There was a huge effort from the bowlers to get us across the line but a lot of credit goes to Pakistan for the way they fought in that second innings,” he said.

“For all money it was going to be a draw until late in the piece.

“We were lucky to be on the right side of the result when we were up against a very tough side.”