Nottinghamshire and Kent march on with big Blast wins 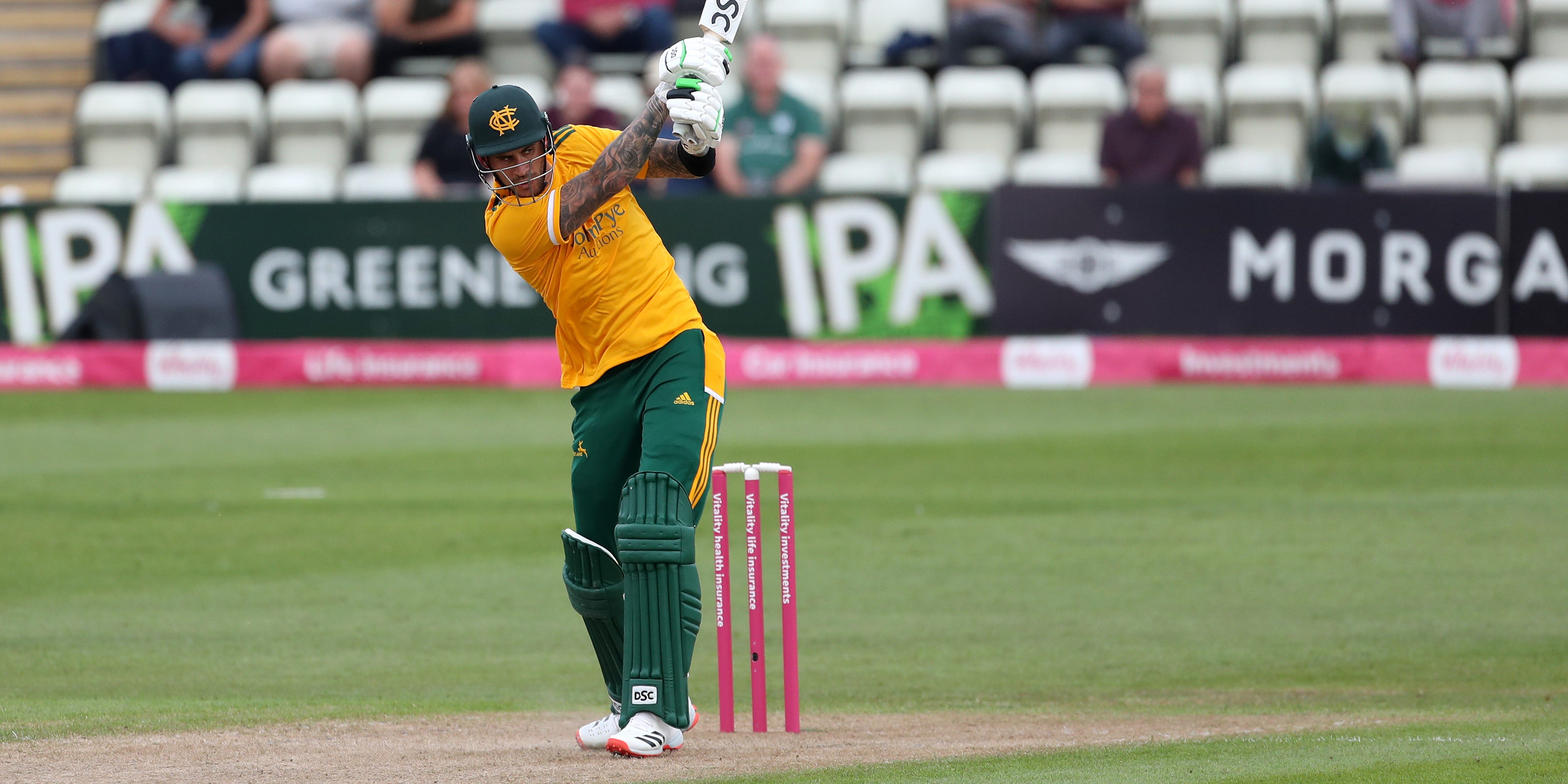 Defending champions Nottinghamshire secured a home quarter-final in this year’s Vitality Blast with a 10-wicket win over Yorkshire in a match reduced to seven overs per side after rain delayed the start.

The Vikings could only reach 60 for three at Trent Bridge, with Dane Paterson taking two wickets in the final over after Samit Patel had taken one for seven in his two overs, and that was put into sharp context when Notts batted.

Alex Hales smashed an unbeaten 31 off just nine balls, finishing the match by slog-sweeping three sixes in four deliveries off leg-spinner Josh Poysden, while Peter Trego flayed 29 not out off 13 deliveries.

The Outlaws, who sit atop the North Group, therefore won with 20 balls to spare, a result which leaves second-placed Vikings still needing one more point from two matches to be sure of their place in the knockout stages.

Third-placed Worcestershire moved a step closer to the last eight as Brett D’Oliveira sparkled with bat and ball to lift the Rapids a 49-run derby triumph over Birmingham Bears at New Road.

Worcestershire racked up 174 for six after electing to bat thanks mainly to a quickfire 45 from opener D’Oliveira and some late fireworks from captain Ben Cox with 43 off 28 balls.

Birmingham were well poised at 81 for two at the halfway stage but D’Oliveira took three wickets in nine balls and then fellow spinner Ish Sodhi collected three in an over as the Bears were dismissed for 125 after 18 overs.

Lancashire leapfrogged Durham and into the fourth and final qualifying spot as the Red Rose thrashed Northamptonshire by eight wickets at Emirates Old Trafford.

Liam Hurt took three for 22 as Northants were restricted to 142 for eight, a total overhauled with 26 balls to spare thanks to half-centuries from Keaton Jennings (54 not out) and Finn Allen (66 from 37 balls).

Durham slipped out of the top four ahead of the final two matches after a last-ball defeat to Derbyshire, who prevailed by six wickets at at Emirates Riverside.

After the hosts were kept to 176 for nine, with Alex Thomson taking three for 23, Brooke Guest (34no) smashed the final ball of the game for four as he and and Matt Critchley (33no) put on an unbroken stand of 64 to defy Durham.

Kent restricted Surrey to just 128 for seven before strolling to a nine-wicket victory at the Kia Oval and strengthening their position at the top of the Vitality Blast’s South Group.

Daniel Bell-Drummond went on to 53 not out from 37 deliveries after he and Joe Denly (31) put on 64 in 8.1 overs for the first wicket to set up a comfortable chase that ended with 27 balls to spare.

An unbeaten 62 by Ravi Bopara and a belligerent 50 not out off 29 balls by Delray Rawlins helped Sussex move up to second after they overhauled Essex’s 146 for nine after 18.3 overs.

Bopara, who spent 17 years at Essex before heading to Sussex last year, came in after skipper Luke Wright departed for a first-ball duck and supervised a successful chase at Hove with six wickets and nine balls to spare.

Ryan Higgins’ 43 from 25 balls ushered Gloucestershire to 171 for eight, a total they successfully defended against Middlesex at Cheltenham College thanks to Benny Howell’s three for 23.

Max Holden’s unbeaten 50 was in vain for Middlesex as they could only post 161 for eight to lose by 10 runs.

Hampshire climbed off the foot of the group with a crushing 75-run victory over fourth-placed Somerset at the Ageas Bowl.

Hampshire bowled superbly to dismiss the visitors for 100, with young quick Scott Currie finishing with four for 24 after wicketkeeper Lewis McManus earlier hit a career-best 60 not out in the home side’s 175 for six.