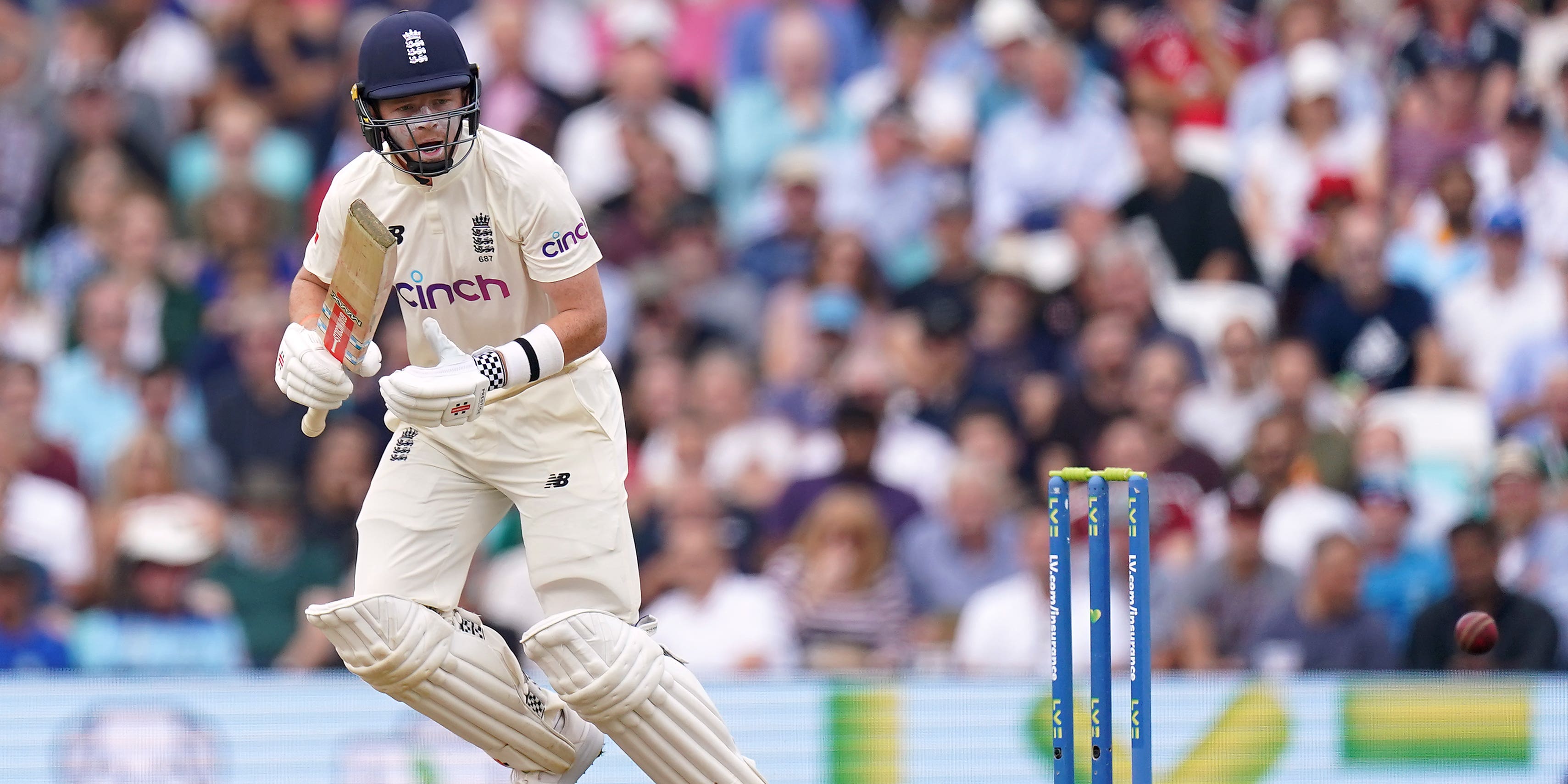 Ollie Pope revelled in his home comforts at the Kia Oval as he produced the top score of the fourth LV= Insurance Test, helping England establish a narrow advantage over India on day two.

The Surrey batsman impressed with his technique and temperament as he outstripped all-comers with 81, taming a pitch that has favoured ball over bat from the off.

Pope has scored seven of his 11 first-class centuries here in Kennington and came to the crease averaging a touch over 100 at the venue. Even though he was unable to add another three-figure score to that collection, he can look back with considerable pride on his first Test knock at his happiest hunting ground.

The 23-year-old was in the middle when England threatened an outright collapse at 62 for five, but righted the ship with stands of 89 and 71 with Jonny Bairstow and Moeen Ali. Chris Woakes then reeled off a wonderfully fluent 50 from number nine, lifting England to 290 all out and a steep lead of 99.

India cleared 43 of those without loss before stumps, Rohit Sharma dropped on four as he and KL Rahul diluted some of the hosts’ momentum.

India had started the second morning full of intent, with Umesh Yadav following up his dismissal of Joe Root the previous evening with two more scalps in his opening burst. Nightwatchman Craig Overton lasted just four balls before slashing impatiently to slip, but Dawid Malan (31) battled for more than half-an-hour before finally obliging with an outside edge.

Suddenly India’s mark of 190 looked a distant one, but Pope and Bairstow were ready to issue their riposte. The departure of Yadav and Jasprit Bumrah from the attack was all the invitation they needed and, in the space of two overs, they helped themselves to seven boundaries.

Pope was first to unleash, dispatching Shardul Thakur to the ropes four times in as many balls. He started with a perfectly balanced on-drive, followed by a whip off the pads and four leg-byes and concluded his mini-assault with a dominant pull.

Picking up the baton at the other end, Bairstow took three boundaries off Mohammed Siraj – a steer to third man, a risky flip that came perilously close to the mid-wicket catcher and a powerful square cut. A lunch score of 139 for five had shored up England’s foundations but the pendulum swung again after the restart, Bairstow pinned lbw for 37 when Siraj nipped one back in off the pitch.

Bairstow, who had earlier been bumped into by pitch-invader Daniel ‘Jarvo’ Jarvis, cut a furious figure as he patrolled the team balcony, seemingly unhappy with the stewards’ inability to prevent movement behind the bowler’s arm.

Pope was having a more serene stay, banking a lovely cover drive and passing fifty when he whipped a freebie off his pads. Moeen offered plenty of entertainment as he chipped in with 35, smoking a handful of languid drives that left the crowd purring.

His departure was less pleasing on the eye, attempting to heave Ravindra Jadeja out of the ground but skying the ball to a back-pedalling Rohit Sharma. Pope eventually followed, after more than four hours and 159 deliveries, dragging Thakur onto his stumps having threatened to do so against Bumrah several times.

From there it was all about Woakes, who followed up his four wickets on day one with a gem of an innings in his first Test outing for a year. He scored 44 of his 50 runs in boundaries, showing off immaculate timing as he picked gaps at will.

He pierced the covers, drove Bumrah to distraction with dabs to third man, punished anything over-pitched and finally chanced his arm with a couple of streaky blows over the top. The fun ended when he set off in pursuit of a bye that would have taken the lead into three figures but never made his ground.

That at least allowed England 16 overs to make some inroads into India’s batting, but the trail went cold after the early chance went begging.

Anderson, fresh from his 100th not out in Test cricket, was the unlucky bowler as Rory Burns made a hash of Rohit’s low edge to second slip. Rather than snaffle the chance he tumbled backwards and allowed it to squirm away for four.

Woakes dried up the scoring with a spell of five overs for eight runs but, with the pitch behaving, England will know things are likely to get harder before they bat again.