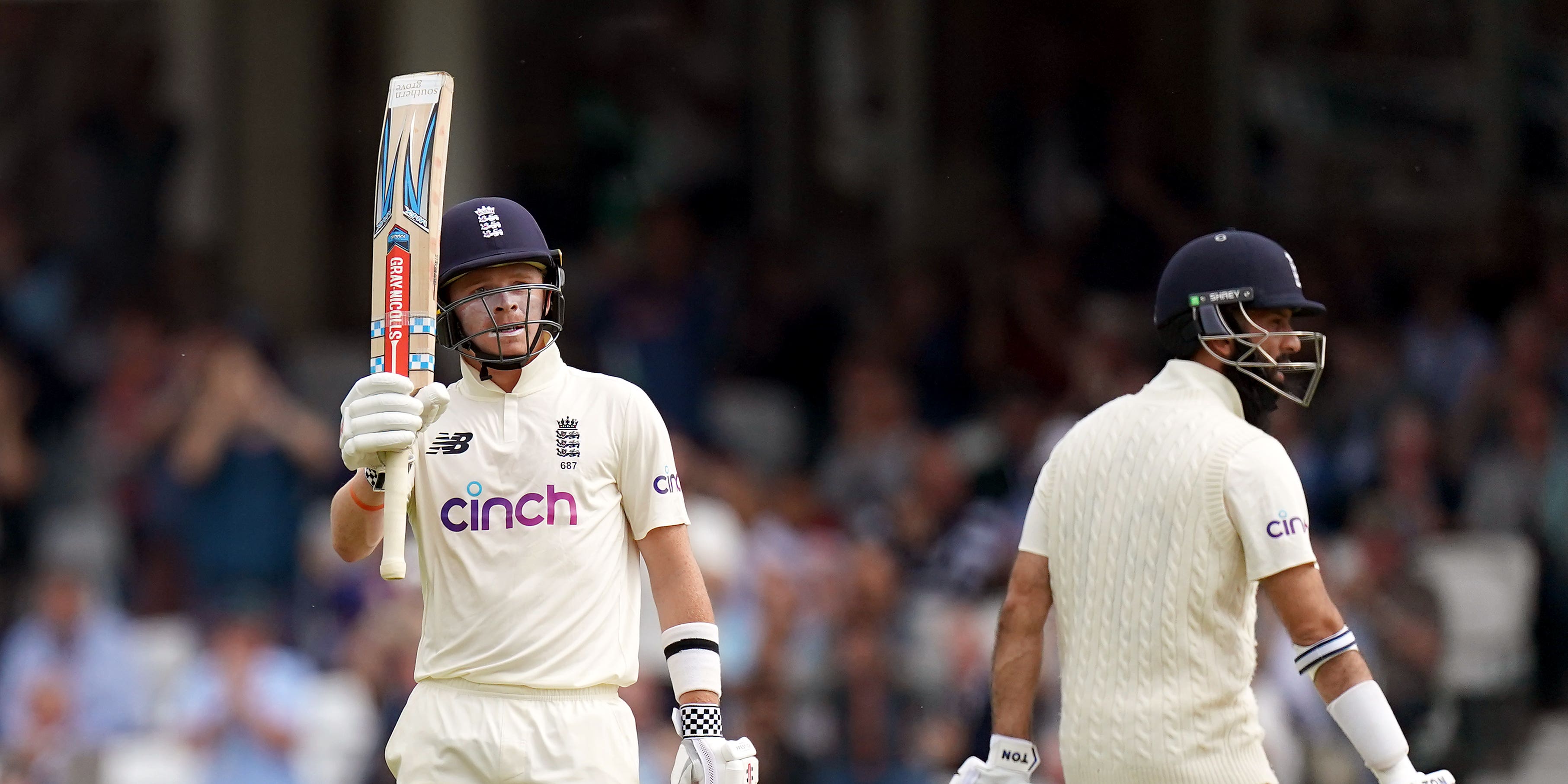 Ollie Pope was enjoying the home comforts of the Kia Oval, making an unbeaten 74 as England overtook India on day two of the fourth LV= Insurance Test.

The Surrey batsman has a longstanding love affair with the ground, where he has scored seven of his 11 first-class centuries, but this was his first visit in England colours.

He came to the crease in the second over of the day, with England in strife at 53 for four after losing nightwatchman Craig Overton, and by tea he had led the side to 227 for seven.

The 23-year-old, restored to the side after three games on the sidelines, shared stands of 89 and 71 with Jonny Bairstow and Moeen Ali to turn a potential collapse into a first-innings lead of 36.

India drew first blood in the morning, Umesh Yadav following his dismissal of Joe Root on the first evening with a double strike. Overton lasted just four balls, slashing impatiently to slip, but Dawid Malan (31) lingered for more than half-an-hour before finally providing the outside edge that Yadav and Jasprit Bumrah had been hunting.

At 62 for five, things were looking bleak for England, but Pope and Bairstow were working up a fitting response. In the space of just two overs the floodgates opened with seven boundaries, completely altering the tone of the session.

Pope was first to unleash, dispatching Shardul Thakur to the ropes four times in a row. He started with a perfectly balanced on-drive, followed with a whip off the pads and four leg-byes and concluded his assault with a dominant pull.

Picking up the baton at the other end, Bairstow took three off Mohammed Siraj – a steer to third man, a risky flip that came perilously close to the mid-wicket catcher and a powerful square cut.

England were the happier side at lunch, with two set batsmen at 139 for five. The pendulum swung again at the start of the afternoon, Bairstow adding just three runs after the restart before Siraj pinned him lbw with a nip-backer. Bairstow, who had earlier been bumped into by pitch invader Daniel Jarvis, appeared to be angry about movement in the crowd and seemed unhappy with the stewards as he remonstrated on the team balcony.

Pope was having a more serene stay, reaching his half-century with a gift of a delivery that he flicked off his pads for four. He and Moeen enjoyed an entertaining time together, clearing the remainder of the deficit in pleasing fashion and starting to build the advantage.

Moeen had a slice of luck on 14 when India missed out on an lbw shout that would surely have gone their way, but he was soon entertaining the crowd with a series of languid drives. Some hits were intercepted by fielders, but several pierced the infield and raced to the ropes. He fell for 35 in the run up to tea, looking to smash Ravindra Jadeja out of the ground but instead skying a catch to Rohit Sharma at cover.

Pope reached tea with half an eye on a second Test century, with Chris Woakes his latest accomplice.