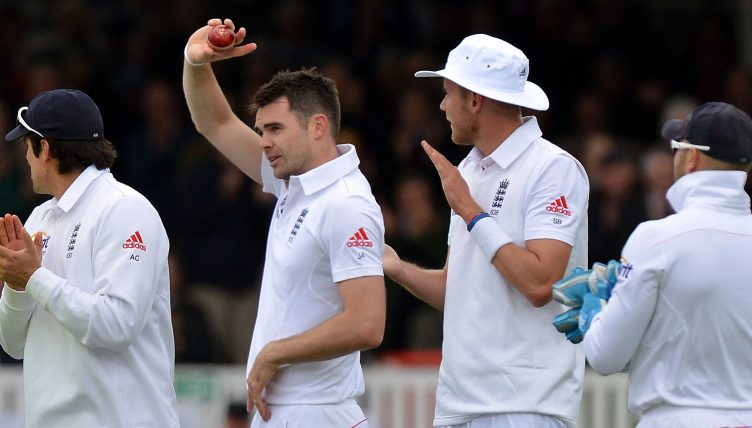 England seamer James Anderson ticked off another milestone in his record-breaking career with his 300th Test wicket on this day seven years ago.

Here, the PA news agency takes a closer look at the moment, reaction and what has happened since.

The unquestioned figurehead of England’s pace attack had been instrumental in a historic 2-1 series victory in India months earlier. While Alastair Cook settled in as captain with a monstrous haul of runs and spin twins Graeme Swann and Monty Panesar took advantage of the typical slow and low subcontinent pitches, India captain Mahendra Singh Dhoni pinpointed Anderson as “the difference” in the series. Twelve wickets at 30.25 does not stand out at first glance but on desperately unhelpful surfaces for seamers, Anderson offered immaculate control.

Three (hundred) is the magic number

On day two of the first Test against the Kiwis at Lord’s, Anderson’s regulation delivery outside the channel left a slightly flat-footed Fulton probing at the ball and the batsman got a thick outside edge to second slip. It was fitting that it was close friend Graeme Swann who was the one to complete the catch on his haunches and it was the spinner who first embraced Anderson before the rest of his team-mates gathered to celebrate. Having already removed Hamish Rutherford, Anderson also claimed the wickets of Kane Williamson and Ross Taylor en route to a five-for.

On joining the greats of the game, Anderson was a little bashful when congratulated by Botham and Willis but largely relieved to reach the landmark. He said afterwards: “It’s quite strange, guys who have done so much in the game and achieved so much – and I watched as a kid – come up and congratulate me on that sort of thing. I’m quite happy that it’s out of the way now, and I did it early and didn’t have to wait around for it. I’m just delighted that I’ve got there, and hope there is plenty more left to come.”

A career average just north of 30 has steadily fallen in the intervening years as Anderson has laid claim to being one of, if not the best fast bowler of his era as he became the first Englishman to go past 400 then 500 wickets. A couple of spells atop the International Cricket Council Test bowler rankings came his way as a result of some immaculate performances while, with 564 scalps at 26.83, he is the all-time leading wicket-taker among seamers. He will turn 38 this summer and though he has been troubled by injuries recently, he insists he is far from finished.