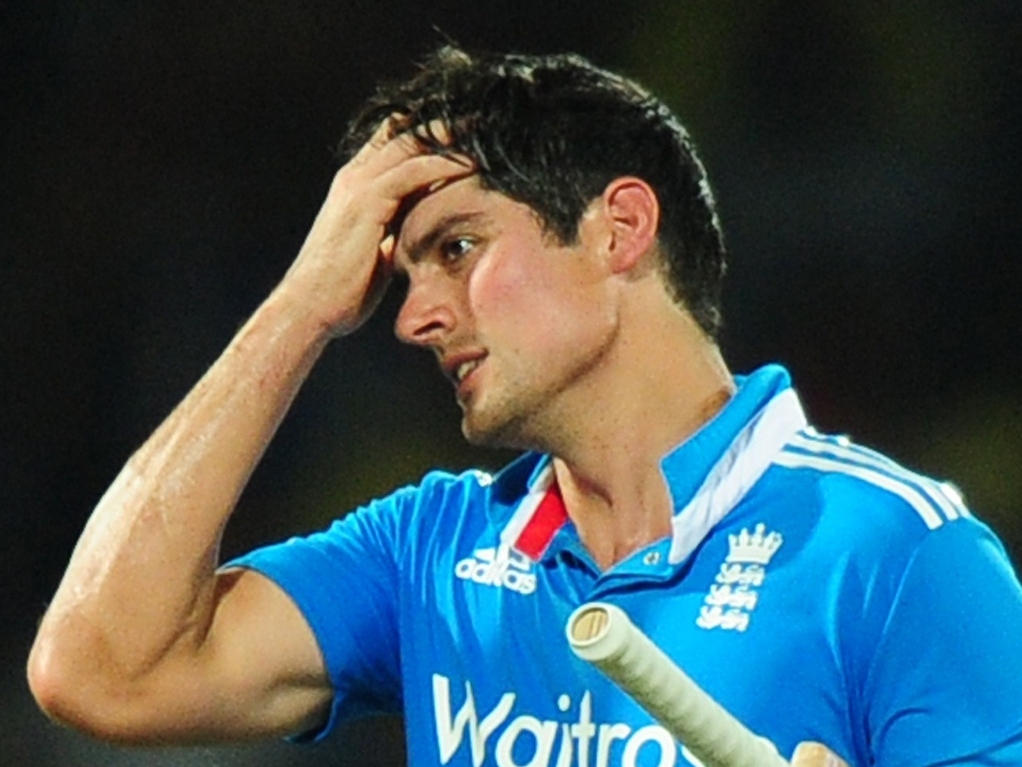 England have made the decision to take the family Labrador to the vets and do the kind thing. Having the poor thing carry on like that was unfair on everyone.

Cook has been put out of his misery in every sense. Even in his last press conference before he was fired he spoke of having 'no complaints' if he were to be removed from his position. He was almost asking for someone to fire the bullet, as he was too proud to pull the trigger himself.

That is not to say the decision was at the right time. It was clear after the loss to Sri Lanka in the summer that Cook was struggling with his form and with the captaincy.

Even before a ball was bowled in the ODI series against India in August, Graeme Swann and Michael Vaughan were calling for him to stand down. As England stumbled to yet another series defeat the fact that Cook was not the right man to lead England forward was even more obvious.

By the time Cook was taking the field in Sri Lanka his form had completely deserted him. His final innings of 32 saw him narrowly avoid being dismissed LBW and he was dropped twice in the slips.

The ECB website’s report said that Cook 'looked in good touch' before his dismissal. Perhaps they were watching the same match as ECB Managing Director, Paul Downton, who backed Cook so emphatically just three days before he was dismissed.

There will be those that say the ECB were brave to sack Cook this close to the World Cup. This is missing that they had no choice but to do this. There was no logical reason to carry on picking Cook in this side.

It wasn't just that he wasn't scoring runs, it was that he didn't seem to have the game that meant he could make a meaningful contribution to this side. Sacking Cook was the only option left, for him and his side. There is no courage in that.

Over the last 20 years, and even more so in the last decade, limited overs cricket has changed. Scoring at the same rate throughout the innings just doesn't cut it anymore. You need to be able to accelerate when well set. Cook has shown that when he has tried to push on he gets out.

The real concern for England is that their stubborn backing of Cook throughout 2014 will hurt Cook the most. He has not looked anywhere close to his best this year. He made the most of being dropped on 15 at the Ageas Bowl to go on and find something close to some consistency in Tests, but he looked like a toddler taking his first steps. It was the beginning of his return to form, not the goal itself.

Cook could have finished his summer with a series win and three fifties against India in a format that is best suited to his game. Instead he spent his time groping around outside his off stump in Sri Lanka as any confidence in his technique that he had found in those formative Test match knocks against India became a distant memory.

The man that is set to replace Cook is Eoin Morgan, but he has no more form to prop him up than Cook. He is averaging less than 30 in ODIs this year, although a decent half century in this most recent series made you think he has the game to turn things around.

The brave decision here would have been to give the captaincy to Joe Root, the only England batsman who is certain of his place in every format. Just as Australia have done by backing Steve Smith as the future man in charge, England could have given Root a go.

Realistically, England aren't going to win this World Cup, this was a chance for no pressure experience for Root.

The issue here would be that if Root did well that would raise questions about Cook as Test captain as well. For years teams have treated the ODI captaincy as the nursery for Test captains. Root getting the job would have anointed him as the next leader in all formats.

Poor returns from Cook against the West Indies and New Zealand ahead of the summer, combined with Root captaining well and scoring runs, and there could well have been another tricky decision to make.

It is important to remember what a fine contribution Cook has made to England, and hopefully he will still make runs for the Test side. If he doesn't the way that this has been handled by the England management could well be to blame.

By backing Cook even when they shouldn't they were damaging his career and that of others in the side.