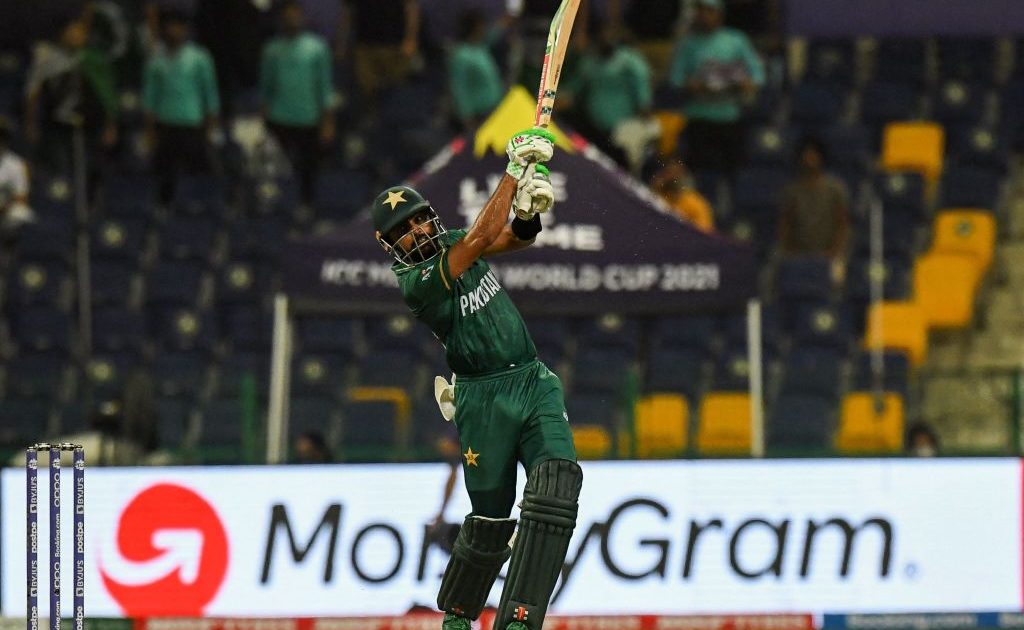 Pakistan were the first side at the T20 World Cup to guarantee a place in the semi-finals after collecting their fourth win from four Super 12 matches, cruising to victory over Namibia by 45 runs in Abu Dhabi.

Babar Azam took a gamble in electing to bat first after winning the toss in a tournament where the chasing team has often prevailed but the Pakistan captain was ultimately vindicated the decision with a sparkling 70 from 49 balls.

Pakistan defied the norms to build a formidable target that set up their fourth straight win of the Super 12 stage.

Fellow opener Mohammad Rizwan finished unbeaten on 79 while Mohammad Hafeez had a cameo of 32 at a strike-rate of 200 as Pakistan clobbered 62 runs from the last 23 deliveries of the innings to finish on 189 for two.

But the Pakistani pair made hay after their steady start, pushing through the gears in the middle overs.

And the return of Trumpelmann in the 12th over was the perfect illustration of the change of mindset, with 18 coming off it and Azam reaching his 23rd T20I half-century off 40 balls.

Hafeez added polish to the innings, with Pakistan scoring an eye-watering 130 runs in the last ten overs.

Namibia kept themselves in the game by advancing to 70 for two at the midway point of their reply but, as they attempted to inject some urgency into proceedings ,they stumbled to 110 for five in the 17th over.

Even a couple of big hits from JJ Smits towards the end as he finished on 43 off 31 balls could get Namibia nowhere close as they settled for 144 for five, likely ending their hopes of a place in the knockout rounds.

Pace bowlers Hasan Ali and Haris Rauf and spinners Imad Wasim and Shadab Khan collected a wicket apiece while there was also a run out as Pakistan maintained their 100 per cent record at the tournament.

A haul of eight points now cannot be exceeded by any team in their group and although it could still be matched by Afghanistan or New Zealand, those two teams still have each other to play and cannot both catch Pakistan, should they suffer an upset.

Pakistan can make sure they finish top of their group by seeing off Scotland in Sharjah on Sunday.