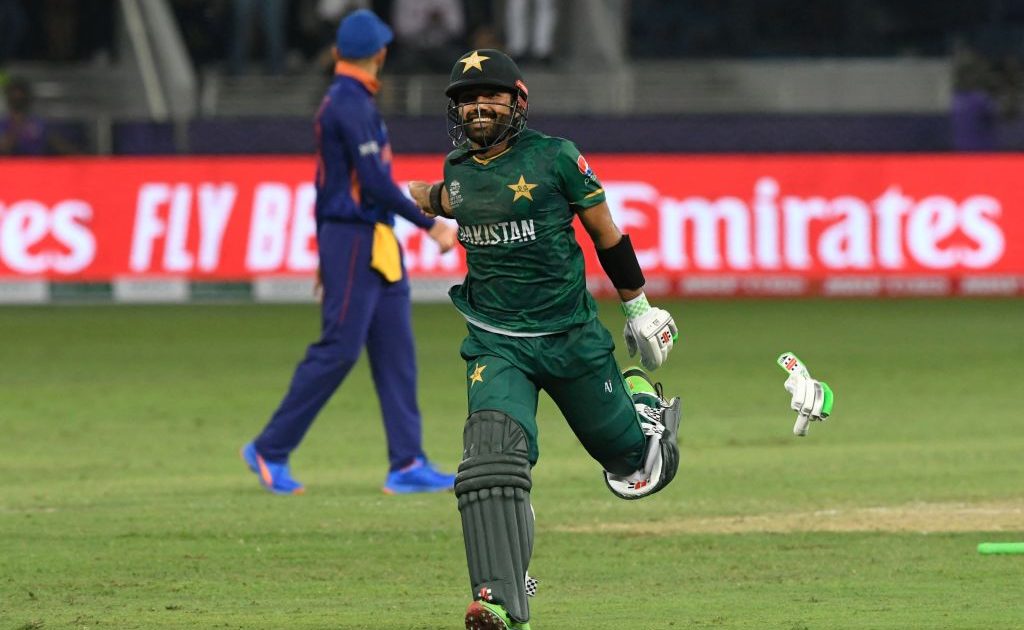 India have had a stranglehold over their neighbours in World Cup matches, prevailing in each of the dozen previous occasions they had met – seven at 50-over level and five in T20s – but that was broken in jaw-dropping fashion.

After Shaheen Shah Afridi bowled with pace and verve in his three for 31 to restrict India to 151 for seven, Babar and Rizwan took centre stage with an unbroken 152-run stand to wrap up a remarkable 10-wicket win.

This marked the first time Pakistan had won a T20 international by such a thumping margin, with Rizwan contributing an unbeaten 79 off 55 balls and Babar 68 not out from 52 deliveries as they won with 2.1 overs to spare.

A 16,466 crowd, made up mainly of India supporters, had cheered as Virat Kohli marshalled India’s innings with 57 from 49 deliveries, leading the recovery from 31 for three after being invited to bat first on a sluggish pitch.

But they became increasingly subdued as the nerveless pair of Babar and Rizwan whittled down the target to help Pakistan off to a flyer in the Super 12 stage on a hot and sweaty evening under lights in Dubai.

The two countries only play against each other in global tournaments nowadays because of the uneasy relations between the two cricketing boards, while the longstanding geopolitical tensions add extra fervour to any contest.

A billion people are estimated to watch these contests, which have been one-sided in World Cups. Pakistan captain Babar intimated in his pre-match press conference that “records are meant to be broken” and he backed up his words in style.

Rizwan showed his intent with a full-blooded pull for six from the third ball of the reply. In the next over Babar got on to the back foot and delightfully timed Mohammed Shami through the covers in eye-catching fashion.

It was one of the strokes of the day but the opening batters largely eschewed risk throughout the powerplay, to the extent that at 52 without loss from eight overs there was a sense they were falling behind the rate.

Perhaps sensing the need to grasp the nettle, Babar smacked the slow left-arm spin of Ravindra Jadeja over midwicket for six, Pakistan’s first boundary in four overs, signalling a change in tempo.

Babar was first to his half-century, latching on to Varun Chakravarthy’s long hop and clubbing high over the leg-side while Rizwan joined his skipper a couple of overs later, with India unable to contain the two batters with the evening dew perhaps an awkward factor.

Rizwan went six-four-four off Shami before Babar got them over the line with a couple later in the over, leaving the pair to celebrate a momentous victory for their nation with a hug in the middle of the pitch.

Shaheen had earlier set the tone in electric fashion for Pakistan, bowling full, fast and with menace. He barely bothered to appeal after locating Rohit Sharma’s front pad, wheeling away in celebration following the most blatant of lbws.

Sharma trudged off with a golden duck and KL Rahul did not last long either, his off-stump pegged in Shaheen’s next over.

The left-armer was lofted over long-on in Kohli’s first sign of attacking intent, but the talismanic India captain had a rebuilding job to do alongside Rishabh Pant after Suryakumar Yadav’s flat-footed waft took the edge.

A 53-run union was notable for the pair’s quick running between the wickets while Pant showed off his range with successive sixes, on both times finishing with one hand on the bat due to an extravagant follow through.

Pant attempted to up the ante but offered only a steepling return catch to Shadab Khan, failing to pick the googly, but Kohli was a towering presence out in the middle, defying Pakistan’s changes of pace and variations for an important 50.

Pakistan frayed towards the end of an innings which yielded 37 runs in the last three overs. Shaheen collected his third with the prize wicket of Kohli, too early to pull a slower ball bouncer, and then unnecessarily gave away four overthrows, but it proved a mere footnote thanks to a masterclass from Babar and Rizwan.