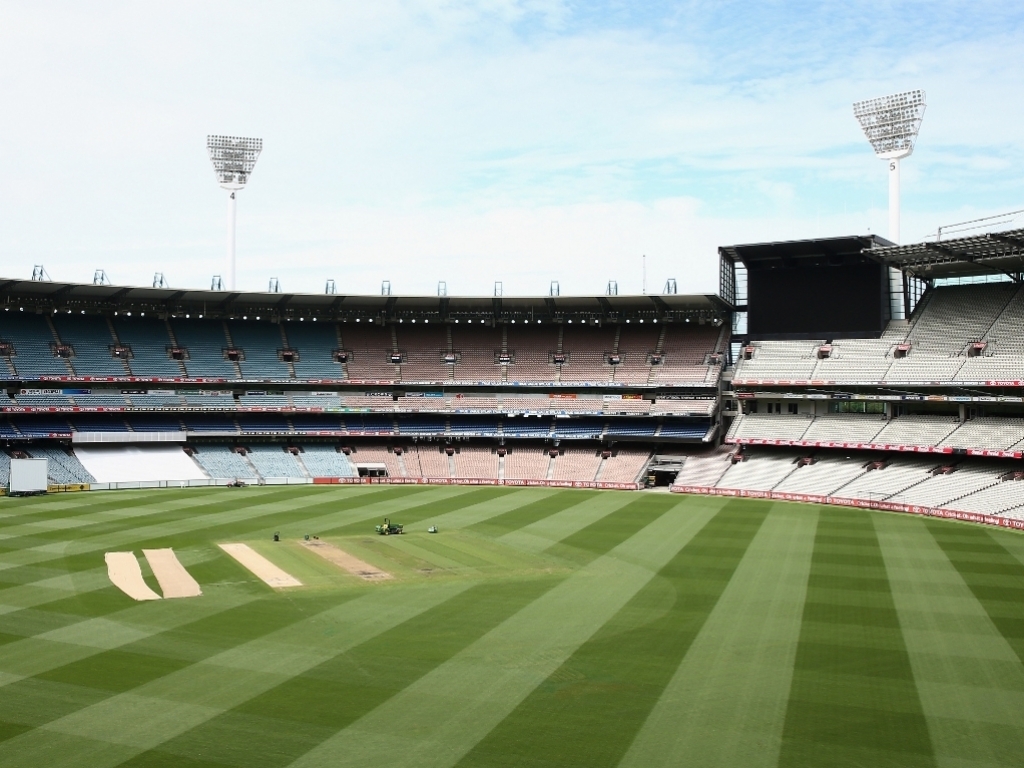 It may be known as the Melbourne Cricket Ground, but in truth the MCG is the premier multi-sport venue in Australia. The 'G, as locals call it, hosted the Olympics in 1956 and the Commonwealth Games 50 years later, with countless international matches in both rugby codes, football and Aussie-rules in between.

But the highlight of the Australian sporting calendar is for many the Boxing Day Test at the MCG. At one point the vast bowl had a capacity topping 125,000, but the conversion of virtually all areas of the ground to seating has seen the total drop below six figures.

With the giant three-tier Great Southern Stand circling almost half the ground and holding nearly 50,000 people, the MCG remains one of the most spectacular and imposing venues in any sport. The MCG hosted the first three Tests in history, and has gone on to host over 50 Tests against England alone.

The Melbourne surface traditionally stays true with even bounce, allowing for a fair contest between bat and ball, although not always between Australia and opposition.

Prior to South Africa's victory here six years ago Australia had won nine matches on the trot at The 'G, although the balance shifted as Australia's fortunes waned, but they came back with a rousing Ashes win in 2013.

The ground was evacuated in August 2006 when a fire broke out in a stand under construction, causing minor damage to the roof and an area of seating.

The most recent Test here was exactly a year ago, when England slumped to an eight-wicket defeat in the Ashes, which they went on to lose five-nil. This game did not even make it to tea on day four.

In a rare turn of events, the Aussies opted to bowl first, given their arsenal of Johnson, Harris, and Siddle, and it worked a treat. Johnson claimed five in the first dig, as England were removed for 255, with only Kevin Pietersen's 71 the shining light.

The hosts replied with an even less impressive 204, as Stuart Broad and James Anderson shared the spoils. Only 60s from Chris Rogers and Brad Haddin spared total humiliation and an even bigger deficit.

England could not take advantage of the gift though, as their batsmen undid their pacemens' hard work. They were all out for 179 this time, with only Cook reaching a half ton. This time it was Nathan Lyon with the five-fer.

As such, Oz only needed 231 to win, which they reached with ease thanks to a brisk century from Rogers and an unbeaten half ton from Shane Watson. Ben Stokes and Monty Panesar took the two wickets to fall.

England captain Alastair Cook after the game: "We wanted to get the ball to reverse, so we bowled with the seamers, trying to rough up the ball. If it comes off it comes off, other people might have done it differently. We got ourselves in a position to win this game so we've got to dust ourselves off for Sydney."

Mitchell Johnson on his efforts: "Yeah, we got the ball to shape, there was reverse as well out there, so it was really enjoyable."

Michael Clarke on his decision to bowl: "I think the risk of bowling first is always the same, if you win you get away with it, if you lose you cop a lot of criticism. I think if there's anything in the wicket for our bowlers I was confident that could do the job and they did."

MCG boss Tony Gordon on the newly-laid outfield in October: "The life span of any natural turf sports surface is not infinite and, while our artificial lighting system has significantly reduced the need for turf replacement, the MCG is a high-use venue. Strategic turf replacement is crucial to ensuring our playing surface is among the best in the world."

With the MCG such a legendary venue, you have to scroll a long way down to find a current player who features on the runs list. Michael Clarke is top of the current crew, though he's not playing now so next is Shane Watson, who averages nearly 90 here.

Watson has scored a ton and four half centuries in just four Tests here, making him a valuable commodity on Boxing Day. Otherwise, Chris Rogers was excellent in the only Test he played here, last time out.

For India, only four of the current side played here in 2011, and none of them, not even Kohli or Dhoni, impressed with the bat, given they lost the game by 122 runs.

For the hosts, Mitchell Johnson is top of the current pile, with 27 wickets in six Tests. He averages under 22, with best match figures of 8/88. Otherwise, Peter Siddle has 23 wickets in six games.

The fact that there hasn't been a draw here in 17 years and 16 matches tells you that there's generally a sporting pitch on offer, but while it may do a bit, the bounce is true and batsmen with solid techniques can flourish.

Generally, the toss isn't hugely significant on a pretty consistent pitch, and so the captains often look to overhead conditions when deciding whether to bat or bowl first. December, admittedly, is largely sunny in the Southern Hemisphere – hence a very high percentage of choices to bat first.