Players to watch in the Women’s World Cup Qualifier 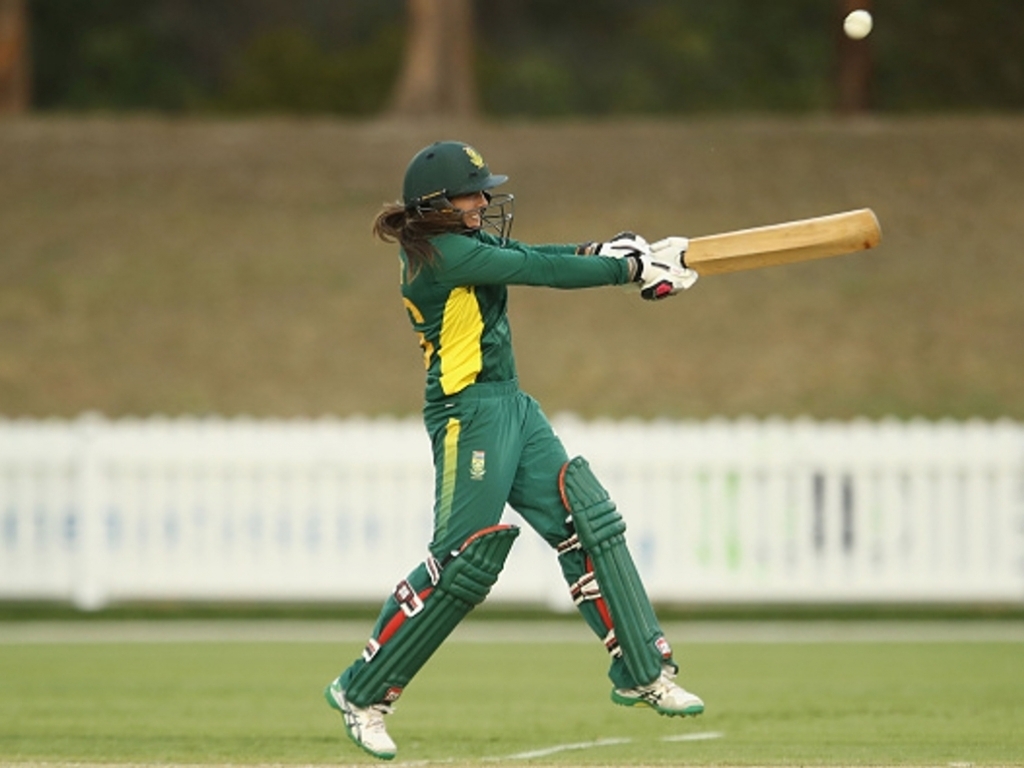 The ICC Women’s World Cup Qualifier 2017 in Colombo, Sri Lanka, from February 7 to 21 will see the best cricketers from 10 nations play for a chance to join the top four women’s sides at the marquee event in June-July in England.

Here are some of the players expected to make a splash:

Just 19 years old, Deepti Sharma’s understanding of the game belies her age. She made her One-Day International debut in 2014, but it was during the home series against New Zealand in 2015 that she made her first impression. Her unbeaten 44 and an unbroken second-wicket stand of 103 with MD Thirushkamini helped India win that match by nine wickets and seal the series 3-2.

Handy off-spin bolwing, the ability to rotate strike and her sharp fielding have given India a strong all-round option. The team also benefits from her ability to see off the new ball at the top of the order. One of only three Indians to take six wickets in an ODI, Deepti is a bundle of energy on the field.

At a time when women’s cricket in India is entering the professional era, Deepti is the face for youngsters. Hailing from Agra and a fan of Suresh Raina, she took up cricket after watching her brother represent Uttar Pradesh in junior inter-state tournaments. She gave up her aspirations to be a medium pacer, and focused on using her supple wrist to turn the ball and create a pathway to the Indian team.

Chamari Athapaththu burst onto the scene with a century against Ireland Women in 2011.

An admirer of Sanath Jayasuriya’s attacking style of play, Chamari Athapaththu is an integral part of the Sri Lankan team. Helped by Kumar Sangakkara’s advice to pace her innings, she has been both an aggressor and accumulator in the batting line-up.

She first burst onto the scene with a century against Ireland Women in 2011, but the biggest impact knock of her career remains her 62 in a one-wicket win over England Women in the 2013 World Cup in Mumbai.

In the nine ODI wins she has been a part of, she has made four half-centuries, signifying her importance in the side. She is also the only Sri Lankan to score two ODI centuries. She fell one short of scoring her third ton, against Pakistan Women in January 2015.

Athapaththu lost her father soon after being selected to the national team for the first time, but has used the setback as an inspiration to keep her career moving. Outside of cricket, Athapaththu works for a bank in Colombo.

A twin international, having represented Zimbabwe in rugby too, Precious Marange is an example of those versatile personalities who make the women’s cricket circuit vibrant. A veteran at 34, Marange works as a machine operator when not playing sports, and is a mother too.

She wants her son to be a pilot. The ability to manage her time between the four passions of her life is the secret to her success as an international athlete. “I give each department time,” she says.

A destructive left-handed top-order batter, her strength is to push the scoring rate along. She was at her best in the Africa Qualifiers last year where she was the only batter to score a fifty and Zimbabwe was the only team to remain unbeaten to top the table.

A right-arm medium pacer, she picked up a lot of top-order wickets when Zimbabwe played against South Africa Emerging Women in Harare last year as part of its preparation for the ICC Women’s World Cup Qualifier. She finished with eight wickets in six matches at an average of 20.37, with a best of 3 for 20.

Coming from a family of sportspersons, Kim Garth is the new face of women’s cricket in Ireland. Popular in the circuit for her incisive bowling, Garth’s reputation was enhanced by being a part of the Sydney Sixers team that won the Women’s Big Bash League 2016-17.

She took six wickets in six games in the WBBL at an average of 22.00 and maintained an economy of 6.00. In the final against Perth Scorchers Women, she dismissed Nicole Bolton, the Australia Women opener, for 34 at a decisive stage of the game.

“I am obviously hugely excited to have been played in the WBBL, let alone win it,” said Garth. “It’s been an amazing experience playing with and against the best players in the world. I have loved every minute of it and learned a huge amount.”

That Garth was in the Sixers’ rooster as a part of the International Cricket Council’s Associate Rookie Programme was because of her impressive shows for Ireland in the recent past.

Her figures of 10-2-37-3 helped Ireland beat South Africa Women in an ODI for the first time ever, in August last year.

She has 51 international wickets in her kitty, which includes a career-best 4 for 11 against Bangladesh Women in 2012 – the best bowling figures by an Ireland bowler since her debut in 2011.

She is the only bowler from her country to take three or more wickets in an ODI on four occasions in the last five years.

One of Sornnarin Tippoch’s best moments as a bowler came in the Women’s Asia Cup last year, when she had India’s Veda Krishnamurthy stumped.

She was Player of the Series in the World Cup Qualifying Series, Asia Region. Her 85 runs and three wickets helped Thailand win five out of their six matches and top the league. Her best performance came against Hong Kong Women across two games. In one encounter she made 36, and in the other fixture against the same opponent, she took 2 for 12.

A leader of the side, her teammates look up to her off the field as well. Polite to a fault, she has a ready smile for everyone and a can-do attitude – and Thailand’s ability to learn from the experience of playing big matches is reason enough for it, she says.

Sune Luus, 21, became the second female player, after Heather Knight, to score a half-century and take a five-for in a One-Day International, with her 52 runs and six wickets for South Africa against Ireland in August 2016.

On South Africa’s tour of Australia, she was asked to open the innings, and despite finding herself in an unfamiliar role, impressed with back-to-back fifties. Her feats earned her a spot in the ICC Women’s Team of the Year.

It shouldn’t come as a surprise that Luus is making waves in the big leagues. She broke into the senior team at the age of 16, and was playing Under-19 cricket when only 13. Hilton Moreeng, her South Africa coach, describes her as a hard worker and a complete package. It’s easy to see why.

Anam Amin has taken four wickets in an innings three times in her 16 matches.

Anam Amin, the left-arm spinner, was one of Pakistan’s biggest weapons at the ICC Women’s World T20 2016 in India.

Frequently opening the bowling and with her ability to deceive batters in the air, she finished that event with seven wickets in four matches and won two Player of the Match awards.

One of those awards came for her 1 for 9 against India, the dot balls she accurately delivered crucial to the tactic of choking the batters and forcing them into mistakes under pressure.

In the ICC Women’s Championship, she finished second behind Sana Mir among her teammates on the wickets chart, with 16 scalps in 11 matches. Since her ODI debut in 2014, Amin, 24, has taken four wickets in an innings three times in her 16 matches, with a career-best 4 for 7 against Bangladesh in Karachi in 2015.

Amin, a big Daniel Vettori fan, enjoyed the support of her father when she took up the sport. Her achievements have meant her initially reluctant mother too takes pride in her success, the youngster has said. Mir, her captain who first spotted her talent and backed her to play in the national side, has called her “the little champ who keeps inspiring us”.

Rumana Ahmed, Bangladesh’s spin-bowling allrounder, took over as captain of the side last year after the ICC Women’s World T20 2016, and has worn the skipper’s cap well.

Under her, Bangladesh brought up a memorable One-Day International win against the visiting South Africans at home in January.

Her personal figures have been impressive since the women’s team earned ODI status: she is the leading run-scorer (567 in 25 matches) and joint-leading wicket-taker (27 wickets in 25 games).

She also has against her name her country’s first hat-trick, which came in a winning cause against Ireland last year.

The bespectacled Rumana, 25, has been a formidable strike option for the team with her legspin. In 2015, she was player of tournament in Bangladesh’s Women’s World T20 Qualifier campaign, with 14 wickets and a best of 4 for 8.

She sees her objective as controlling the flow of runs and being mentally strong in high-pressure situations. “Then wickets will come automatically.”

The youngest of four siblings, she was encouraged to pursue the sport by her late father, and is grateful for her family’s support as she follows her passion through adversity.

Kathryn Bryce is just 19, but she’s already gone places – literally. The Scotland youngster was in Australia in the run-up to the ICC Women’s World Cup Qualifier 2017 as the rookie cricketer at WBBL’s Melbourne Stars, learning from the intensity, the fitness and the high standards.

It wasn’t her first foray into Australia, though. The previous year, she had spent three months at the Darren Lehmann Cricket Academy. It involved rigorous training in the sweltering Australian summer. As eye-opening were the matches she watched from the stands at the Adelaide Oval.

“I was the only girl, but having grown up playing cricket mainly with boys, this really didn’t faze me much and probably pushed me more to my limits,” she wrote about her experience at the academy.

Bryce was the leading run-getter in Scotland’s successful European Qualifier for the Sri Lanka event, with 144 runs against her name. At her young age, the allrounder who is studying sports science, has also led the squad, taking charge in the final round of games of the NatWest T20 in England, a tournament where she had the remarkable figures of 4 for 5 in one game.

Bryce’s younger sister, Sarah, is also a member of the squad. The formidable pair put on an unbroken partnership of 336 during an Under-17 game in 2015, Kathryn finishing on 173 not out and Sarah unbeaten on 132.

The vice-captain’s 3 for 19 in the game against Samoa sealed her team’s spot for the ICC Women’s World Cup Qualifier 2017 in Sri Lanka.

Oa’s mother lives in Townsville, Queensland, but that is not Oa’s only connect to Australia. As an ICC and WBBL rookie, she had a chance to shadow the Adelaide Strikers squad during the 2016-17 Women’s Big Bash League.

She also plays in Australia outside of the WBBL. She was part of the East Asia Pacific Team, which included her colleagues from the Papua New Guinea national side, along with players from Japan and Samoa.

Oa expects her experience to come in handy as PNG aims to make it to the Super Six stage and earn One-Day International status.

Back home in Hanuabada, PNG, she has a husband and two-year-old son, also plays netball, and doesn’t bat an eyelid about balancing the various aspects of her life.