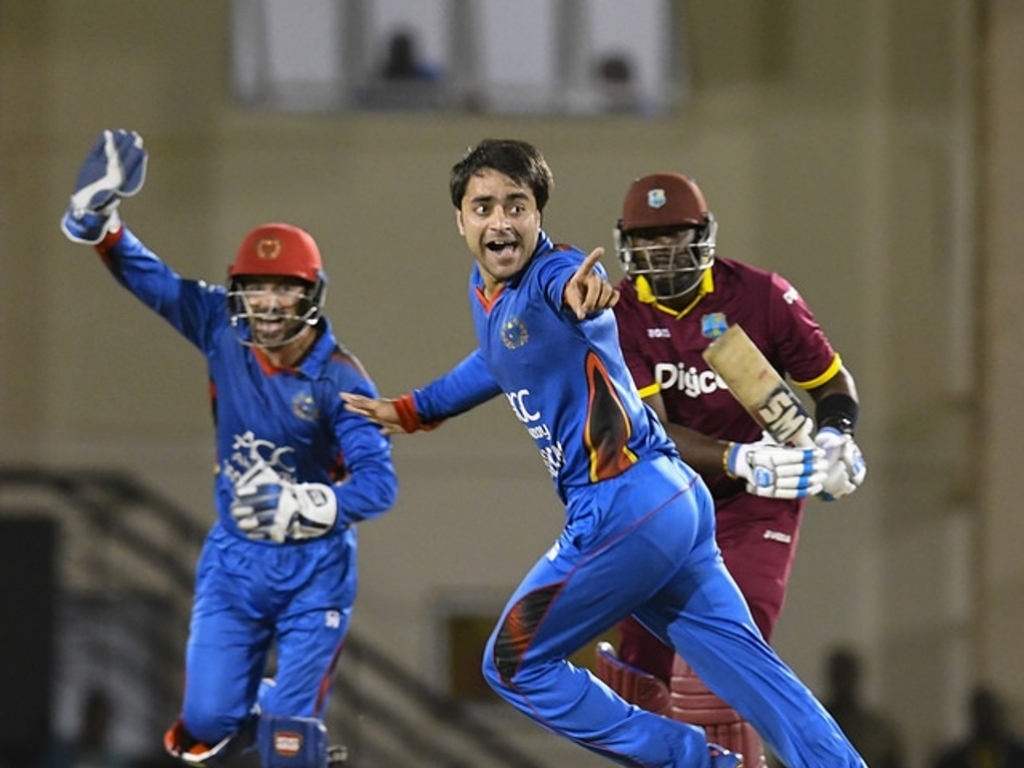 Afghanistan spinner Rashid Khan showed that he can cut it against the big boys taking 7 for 18 to help defend a total of just 212.

In a low-scoring first ODI in St Lucia the spinner grabbed the fourth best ODI figures of all time.

The 63 run win was Afghanistan’s first ever over the West Indies and their maiden win over one of the established powers of world cricket having previously recorded victories over full members Zimbabwe and Bangladesh.

Not only does the defeat almost guarantee that the West Indies will have to play in a qualifying tournament to reach the 2019 World Cup it places in doubt their ability to seal a place at all with Afghanistan set to compete in the same event.

That Afghanistan had anything to bowl at at all was down to a gritty knock of 81 from opener Javed Ahmadi who weathered fierce spells from Miguel Cummins and Shannon Gabriel.

Gulbadin Naib’s late hitting took him to an unbeaten 41 and helped Afghanistan reach a defendable total after the quicks and Ashley Nurse (2/34) looked like they would run through the lower order.

It was in the 23rd over of the chase that Rashid was introduced with the West Indies looking solid at 68 for 2 but that would soon change.

Jason Mohammed (7) was the first man to fall victim to the leggie before debutant Roston Chase got a first baller.

Shai Hope (35) top scored before he was brilliantly caught by Mohammad Nabi at slip off the bowling of Rashid.

Jason Holder became the second West Indies batsman to get a first baller and Rashid had four after castling the skipper.

Nurse (12) and Alzarri Joseph (27) provided late resistance with Johnathan Carter (19 off 56 balls) but the pair of lower order batsmen fell either side of the wicket of Carter.

Rashid wrapped up the victory by bowling Cummins (5) and gave Afghanistan the win and a 1-0 series lead.

The leg spinner dedicated his man of the match award to the victims of the bombing in Kabul last week: “We really needed this after losing three consecutive T20Is.

“To perform on this big stage means a lot to me. The wicket wasn’t great to score quickly. We bowled according to the plan and conditions. That made the difference. I want to dedicate this Man of the Match award to victims of the Kabul attacks. We’re trying our best to bring back smiles and happiness in whatever way we can. Please keep all of us in your prayers.”