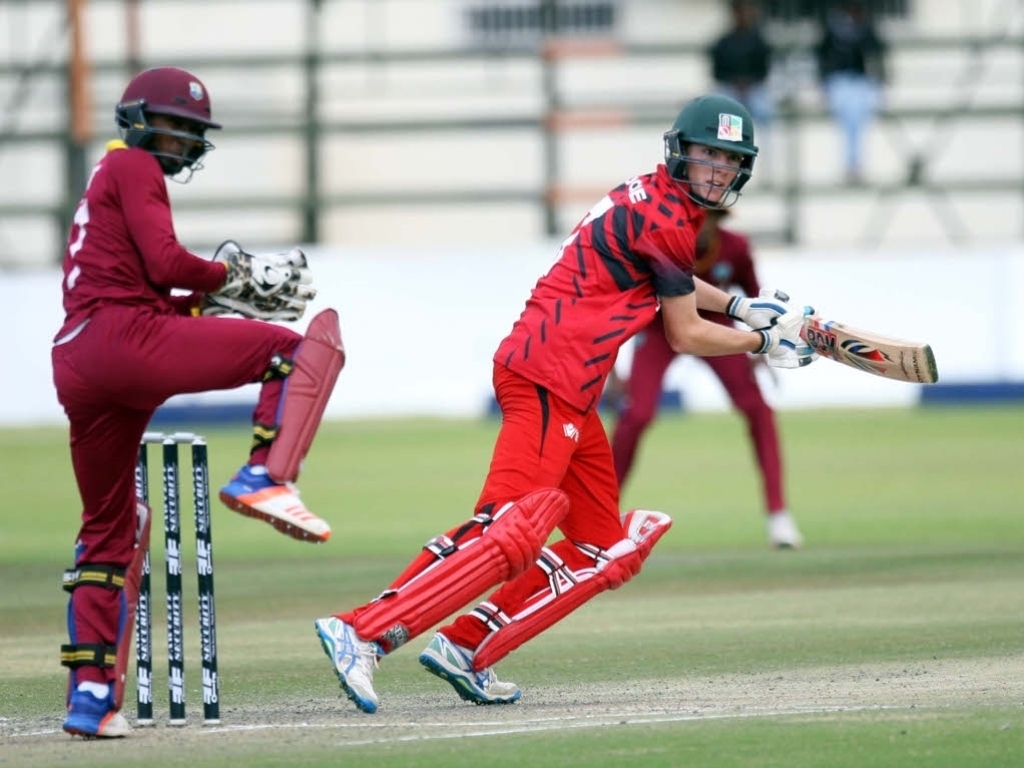 Despite good bowling from Jonathan Conolly and a fine fighting innings of 65 from the captain Liam Roche, the Zimbabwe Under-19 team went down to their West Indian counterparts by 70 runs in the third and final youth one-day international at Harare Sports Club.

The tourists therefore took the series by two victories to one.

After their inspired performance in the second match, played at Peterhouse College in Marondera on Wednesday, the Zimbabweans could not repeat it as the West Indians came out this time fighting hard and in fine form.

It was a good team performance by them, but especially from their top three batsmen, who gave them an advantage they never relinquished, and pace bowler Darren Nedd, who delivered the most decisive blows to the Zimbabwean batsmen.

It was a bright sunny morning at Harare Sports Club, although later in the day light clouds alternated with sunshine.

The Zimbabweans won the toss for the first time in the series and put the West Indians in to bat on a good-looking pitch, following the current trend in Zimbabwean cricket of preferring to chase a target.

Bhaskar Yadram gave his team a confident start by taking eight runs, plus two leg-byes, off the opening over from Tinotenda Jakachira, who was immediately removed from the attack.

The batsmen, Yadram in particular, looked most comfortable and scored freely off the seamers, and the home captain, Roche, soon brought on his spinners to slow down the scoring rate.

The batsmen were helped by some fumbles in the field, the worst instance being when Wesley Madhevere, who was bowlin
g, fielded the ball and decided to copy international players by unnecessarily hurling the ball back at the batsman’s wicket, only to throw so wide of the wicket-keeper that the ball went to the boundary.

The West Indies fifty came up in the 13th over, of which Yadram had 34.

Yadram began to dominate the spinners, mainly through powerful driving, and went to his fifty off 57 balls, by which time the left-handed Simmons had 22.

The partnership finally came to an end in the 25th over, with the score at 113; Yadram lofted a drive to long-off off Taun Harrison, where Dion Mazhawidza took a fine tumbling catch.

Emmanuel Stewart, in next, looked well settled from the start, especially strong on the pull against anything short.
Simmons, now opening up and playing more strokes, reached fifty off 80 balls.

The 200 came up in the 42nd over, and was immediately followed by Stewart’s fifty off 60 balls.

Simmons’ fine innings came to an end with his score at 89, as he drove a firm return catch to the bowler, Milton Shumba; the score was then 224 for two in the 45th over.

He was replaced by another left-hander in Matthew Patrick, but he made only three before being caught at the wicket by Ryan Murray off the bowling of Conolly.

Joshua Bishop, forced to hit out, drove a catch off his second ball into the covers off Conolly; 234 for four in the 47th over.

Stewart (76 not out off 79 balls) and Alick Athanaze (15 not out) took the score to 257 for four at the end of 50 overs, making Zimbabwe’s target a very difficult one for inexperienced players.

Conolly, who bowled particularly well at the death, was the most effective of the Zimbabwean bowlers, taking two for 33 off eight overs, while two other spinners in Roche and Madhevere were similarly economical, but without taking any wickets.

The Zimbabweans opened their batting with Shumba and Gregory Dollar, who scored 10 runs off the first over, bowled by Darren Nedd.

Dollar played an enterprising innings, scoring 15 off 15 balls before he walked into a full-length ball from Nedd and was adjudged lbw; 21 for one in the third over.

This brought in the Zimbabweans’ most experienced player, Murray, but he scored only three before being out to a fine delivery from Nedd, which came back in to bowl him; 28 for two.

Shumba reached double figures with a very well-timed straight drive over the bowler’s head to the boundary, but then miscued a big hit and skyed a catch for 12 off the first ball delivered by the medium-paced Yadram; 45 for three in the 11th over.

Dion Myers now joined Alistair Frost, who was next to go, for 11, as he dabbled at a ball from Yadram outside the off stump and edged a gentle catch to the keeper; 52 for four in the 13th over.

Next came a useful partnership between the cautious Myers and the more aggressive Roche, who took the score to 100 in the 24th over.

It ended when Myers was run out for 11, taken unawares at the bowler’s end by alert West Indian fielding.

Harrison now came in to partner Roche, but as they batted capably together the required run rate was steadily creeping up on the other more than seven runs an over.

They were helped, though, by some faulty West Indian fielding, so the Zimbabweans were by no means the only culprits in this match.

Another run-out ended the stand, with Harrison (12) being sent back as he started off on an unlikely single, making the score 131 for six in the 33rd over.

With Madhevere having joined him, Roche completed an admirable fifty off 67 balls – he rarely looked in any difficulty against the bowling.

Shortly after this, another run-out almost took place, but with both batsmen uncertainly in mid-pitch the throw from the boundary was wildly inaccurate.

A hat-trick of strange run-outs ended Madhevere’s innings for 11; 160 for seven in the 39th over.

Then Zimbabwe’s hopes suffered a final fatal blow as Nedd returned to the bowling crease and immediately produced a fine leg-stump yorker to bowl Roche out for 65; 168 for eight in the 39th over.

The captain had faced 80 balls and hit four fours, while none of the other leading batsmen in the side had passed 15.

Six of them were dismissed for scores between 11 and 15, which should provide a clear lesson to batsmen who lose their wickets after they have done the hard work of playing themselves in.

Mazhawidza came in next, and skyed a catch to mid-off, which was helpfully dropped by the clumsy fielder, who made the ground to reach the ball but then let it slip.

Mazhawidza made only five, however, before skying a catch to give Nedd his fourth wicket, and then Jakachira brought about his team’s fourth run-out of the innings to end the match with a total of 187.

Conolly gave some life to the final stages, scoring 14 not out off 13 balls.

With four run-outs and only Roche able to pass 15, it was a very disappointing display by the young Zimbabweans, but one which should teach them important lessons for the future.

Nedd was undoubtedly the best bowler of the match, and returned figures of four for 33, while Yadram took two important wickets for 20.

No other bowlers took any wickets, as the other four wickets were caused by Zimbabwean batsmen running themselves out.

The West Indian performance was by no means without blemish, but they had the men to stand up and take control of the game, and deservedly won the match and the series.