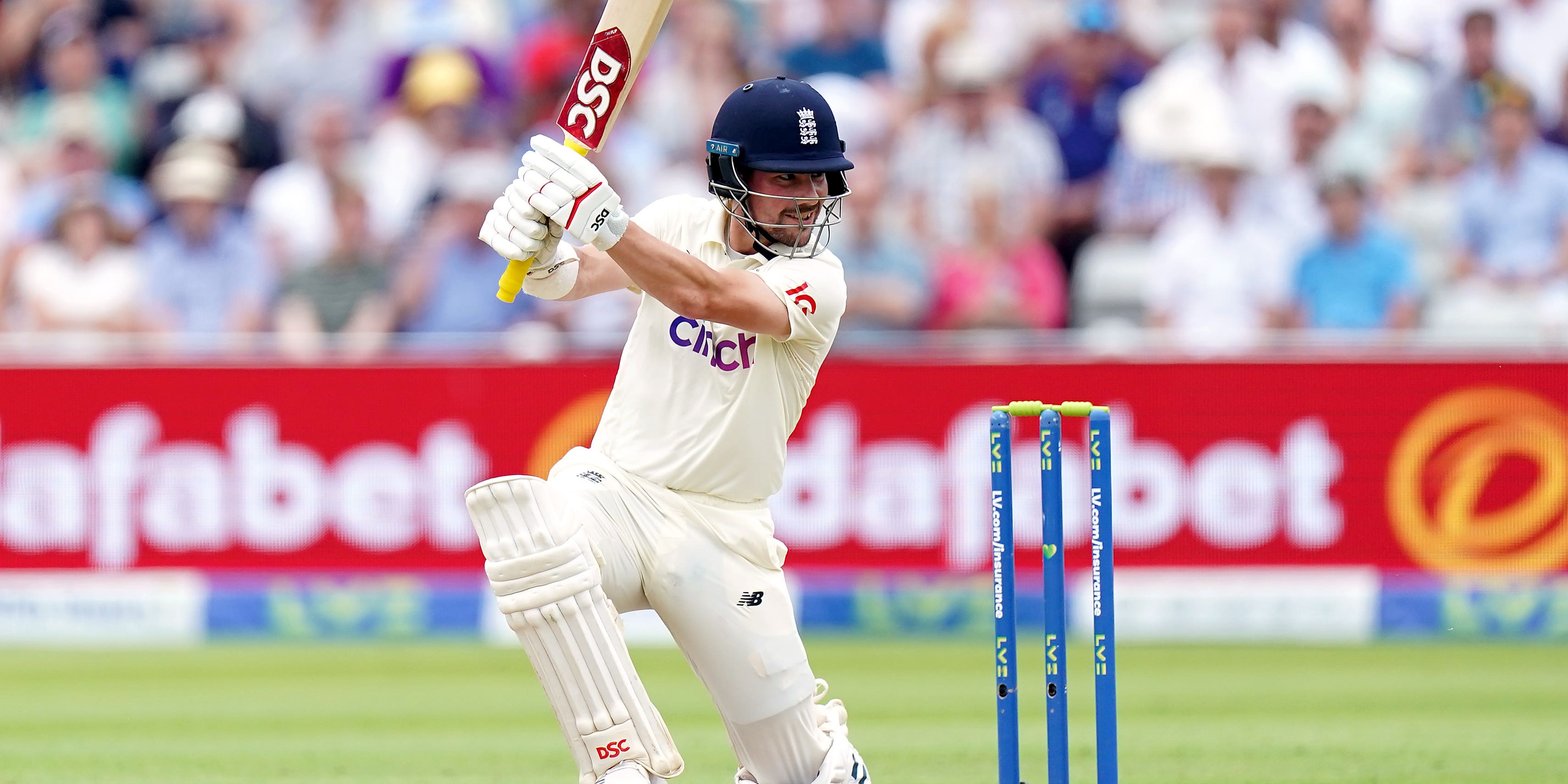 A stoic knock from Rory Burns and an evening flourish from Dan Lawrence prevented England from flopping against New Zealand in front of their biggest home crowd since 2019.

Burns compiled a hard-fought 81 and Lawrence picked up the mantle to finish with an eye-catching 67 not out from number six, leaving the hosts 258 for seven on day one of the series-deciding second Test.

With 18,000 fans pouring into Edgbaston, 70 per cent of full capacity as a result of the Government’s pilot event scheme, there was a long-awaited throwback to the familiar sights and sounds of the summer game.

Alongside the loud chanting, the beer snakes and the fancy dress – all conducted without the demands of social distancing – there was a hint in the afternoon of a more vexing tradition: the English batting collapse.

After an opening stand of 72 between Burns and Dom Sibley the hosts found themselves 175 for five and in danger of ceding control to a visiting side showing six changes from the drawn match at Lord’s.

Things would have looked even worse had it not been for a fine opener’s innings from Burns, who made his runs from 187 deliveries to provide some much-needed backbone, and Lawrence, who struck 11 boundaries in a bright showing.

The day began with James Anderson overtaking Sir Alastair Cook as England’s most capped Test cricketer with his 162nd appearance, though he was quickly putting his feet up in the dressing room after Joe Root won the toss and opted to bat first.

Both sides shared the pre-agreed ‘moment of unity’, with England once again donning anti-discrimination T-shirts that have taken on an even greater significance since the Twitter storm which began with the suspended Ollie Robinson and has since grown. The gesture was warmly applauded by the crowd, though there were reports of Robinson’s name being sung later in the day.

The first session was a slow burner as Burns and Sibley blocked and left against a swinging new ball, picking up a modest 25 in the first hour before spreading their wings enough to reach 67 at the lunch break. The foundation was ostensibly a good one, giving both men time to size up conditions and testing spells from Trent Boult and Matt Henry passing without a chance.

But things shifted quickly as the Black Caps took three for 13 in the first five overs of the afternoon. Sibley (35) was first man down, caught behind as Henry’s accuracy paid off.

Zak Crawley was next, bagging a four-ball duck as his run of poor form continued. Since his career-best 267 against Pakistan last August he has been dismissed in single figures nine times in 11 attempts and was almost cleaned up by a Neil Wagner inswinger immediately before he sprayed a catch to third slip.

If that was a blow for England, Root’s departure for just four was even more worrying. His only scoring shot sailed wide of the cordon and he nicked Henry’s next ball through to wicketkeeper Tom Blundell.

Burns was a calm observer to the drama, sticking to his guns as he quietly took the total past three figures with his fifth boundary of the day and then bringing up his own half-century in 141 balls.

The left-hander put on 42 with Surrey team-mate Ollie Pope, before the latter continued his frustrating habit of getting started then getting out. With 19 to his name he aimed a cut at the gentle spin of Ajaz Patel but edged behind.

The Hollies Stand were working up a head of steam despite these setbacks, but when Burns and James Bracey fell to successive Boult deliveries – both chasing the ball well away from their bodies – it started to go quiet.

Bracey’s demise, a second duck to start his international career, had a poignant feel as the Gloucestershire prospect hung his head for several seconds before trudging off.

It took a dash of panache from Lawrence to lift the spirits and the decibel levels. He had a sticky start, including a couple of streaky boundaries off Henry, but began to show his personality and his skill as the evening session continued.

He hit one immaculate off drive that was comfortably the shot of the day and was soon whipping the second new ball off his hips in confident fashion. He signed off with a fierce straight hit off Boult and will harbour hopes of a maiden century if the tail can continue to linger.

That has been the case so far, with Olly Stone playing his part in a 47-run stand before falling lbw to Patel and Mark Wood facing down 58 balls to see things through to stumps.