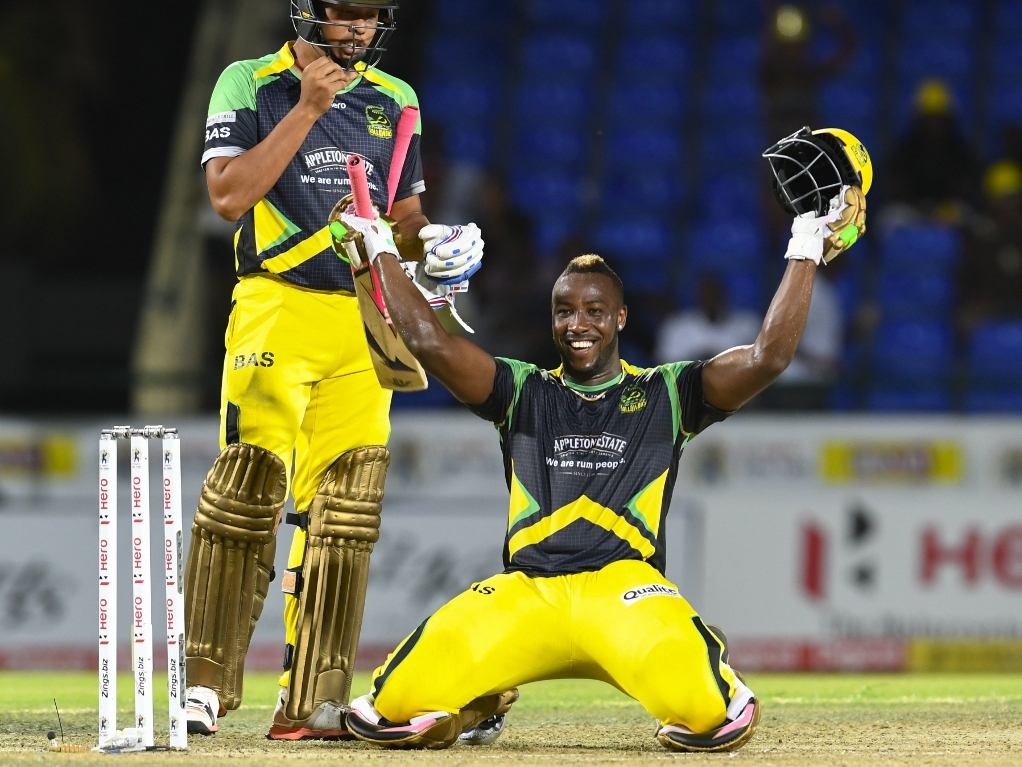 The fastest ever Caribbean Premier League (CPL) century by Andre Russell helped the Jamaica Tallawahs defeat the Trinbago Knight Riders in Warner Park to secure a place in Sunday’s final.

Russell came to the crease with his team in real trouble with four wickets down and just 67 runs on the board.

His 42-ball hundred meant that his side recovered to 195-7, a total that was always going to be too much for the Knight Riders to chase even after it was reduced by rain.

The Tallawahs were the eventual winners by 19 runs via the Duckworth Lewis Stern method as TKR struggled to get going in their innings with Russell following up his batting efforts with two wickets.

The Tallawahs got off to a brisk start thanks to Chris Gayle who cut the third ball that he faced for four. The Tallawahs’ captain looked to be the mood for a big score, reaching 36 from 26 balls, but he mistimed a pull shot to a good length ball from Kevon Cooper that was caught on the midwicket boundary by Colin Munro.

Despite this quick runs for Gayle there were wickets before and after he departed that held up the Tallawahs’ progress. Chadwick Walton was lucky to survive inside the first over when he was dropped off Ronsford Beaton but he did not make the most of that life, edging behind to Denesh Ramdin off Cooper.

With Kumar Sangakkara also holing out in the deep the Tallawahs were struggling to take control of the innings, finding themselves 58-3 in the 8th over.

That became 67-4 when Rovman Powell got out a leg stump half volley from Dwayne Bravo that he was unlucky to spoon straight into the hands of Sunil Narine at fine leg. That wicket for Bravo took him to the top of the CPL wicket taking list for the tournament.

The pressure was on Andre Russell to rescue this Tallawahs effort and he was in some discomfort shortly after arriving at the crease. He ducked into short ball from Bravo that struck him on the hand. After some attention from the physio and he was able to continue and as he made 100 from 43 deliveries it didn’t seem to have any lasting after effects. It was a breath-taking innings that included 11 maximums.

A lengthy rain delay did not hold up Russell as he shared a stand of 100 with Shakib al Hasan, making 82 of those runs himself. It was a career best performance from Russell, passing the 77 he made for Worcestershire vs Somerset in 2013. He reached his maiden T20 hundred with a straight six and he dropped to his knees roaring with delight.

Russell fell in the final over but his innings took meant the Tallawahs had set a daunting target of 196.

When the Knight Riders got under way Umar Akmal opened the batting and he should have departed to the final ball of the first over when he edged behind but the umpire did not give it. Akmal was gone the very next ball when a mix up with Hashim Amla saw him run out to leave the Knight Riders 9-1 after two overs with Imad Wasim starting with a wicket maiden.

Yet more rain held up the chase with two overs still needed for the game to constitute a match, but the Tallawahs would have been safe in the knowledge that if there was a no result they would go through as they finished above the Knight Riders in the CPL league table.

The players did get back out at 2am local time to finish the game, with the chase reduced to 130 in 12 overs, a stiff rate of more than two runs a ball. While Amla struggled the in form New Zealander Colin Munro kept his team in the game.  Munro could not keep it going though, and he was caught in the deep off Imad’s bowling as the Knight Riders chase petered out in a flurry of wickets.

The Tallawahs will now go on to the final to face the Guyana Amazon Warriors, the team they lost to in the first play-off match on Wednesday. The Jamaica side will be hoping for a different result on Sunday.