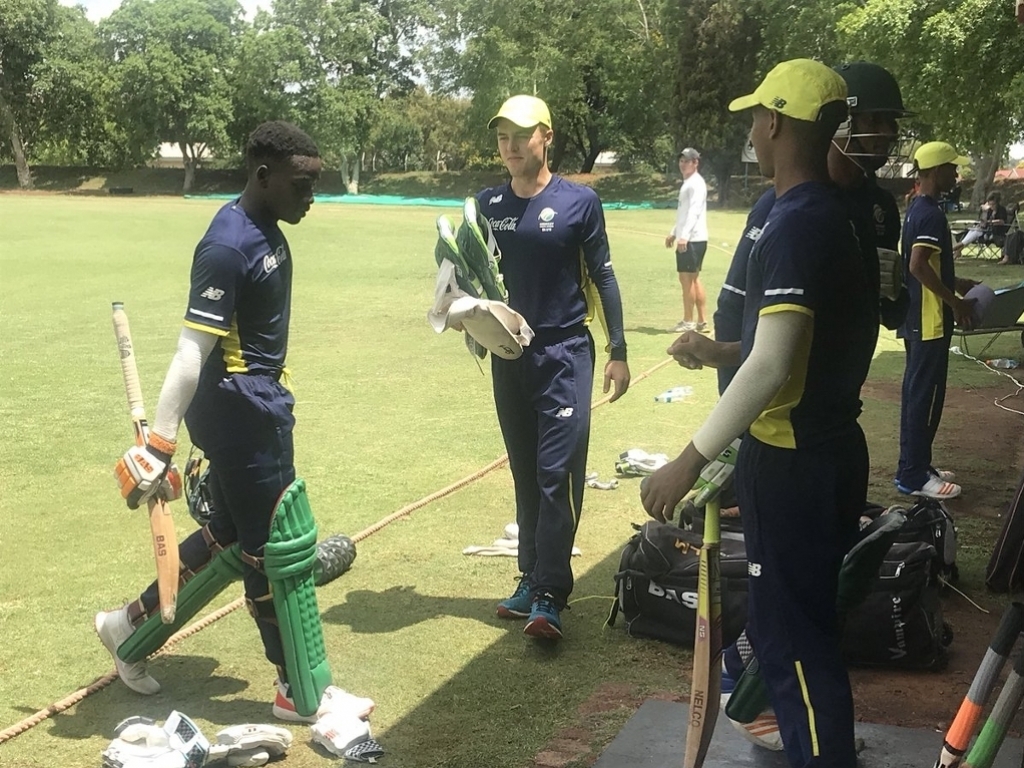 South Africa under-19s have concluded their last training session ahead of their first warm-up match of the 2018 ICC U19 World Cup against India in Christchurch, New Zealand.

Wicketkeeper-batsman, Wandile Makwetu is satisfied with the team’s preparation and believes that they are ready to get the warm-up matches underway with no better way to start than a challenging outing against one of the tournament favourites, India.

Speaking on the team’s journey to New Zealand and how they have settled in as a group, he said; “It’s been a good three days. It was really long travels to get here so to be out in the nets and out on the field training has been really good. We’ve settled in nicely and we’ve got stuck into our work so we’re really happy with where we are.”

Having not played a series against India as a SA U19 side in several years, Makwetu remains confident in his team’s chances and believes that the coaching staff and the players have done their due diligence ahead of tomorrow’s fixture.

“The guys are quite calm,” he continued. “Obviously we haven’t played against India before so it will be nice to see what they are about. The coaching staff have done their preparation on the Indian group and so have we, but I think tomorrow’s warm-up game is really about us, it’s not the opposition that we’re playing. It’s just about doing the things that we’ve spoken about for the last 12 months really, so I think we’re not really worried too much about the opposition, we just want to do what we’ve been speaking about.”

The nineteen-year-old from Gauteng is the most capped member of the team and is the only member with previous World Cup experience. He was a part of the 2016 Bangladesh World Cup squad and has learned a lot about the game of cricket and his own craft since then. He said that he wants to see a strong performance from the team when they face India and wants them to play their own brand of cricket.

“I think the warm-up games are just about playing the way that we want to play. As much as it would be nice to win, the results don’t mean too much, we just want to make sure that we are playing cricket the way that we want to play it and making sure that everything that we’ve spoken about we actually go out there and try and execute so that we can see what works and what doesn’t. It’s an opportunity for us to see what the New Zealand conditions have to offer us and then for us to try to execute our plans as best as we can.”

Looking ahead to the match against India, who boast a very experienced team, Makwetu believes that the two sides are evenly matched as every member of the South Africa side have played either senior provincial cricket for their respective members or played franchise cricket.

“We’re really happy with the work that we’ve done (in preparation), we left no stone unturned when we were in South Africa and the work that we’re doing now in New Zealand is just about really getting used to the conditions and making sure that we understand them and that we’re able to execute as best as possible.

“The Indian group have quite a few names and they’ve got experience, but we’re not playing against names. At the end of the day we’re just gonna go out there and it’s eleven on eleven and we’re just gonna play the best cricket that we know.”

Play begins at 10:30 local time (11 hours ahead of South Africa) at Christ’s College.