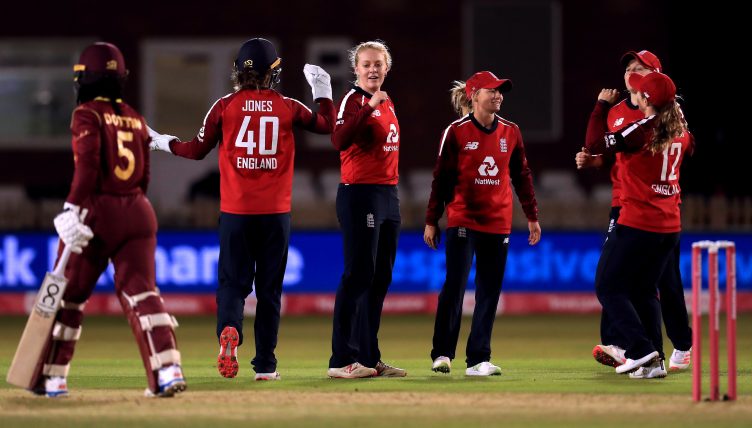 Sarah Glenn made key contributions with bat and ball as England Women overcame the West Indies by 47 runs to move into a 2-0 lead in the Vitality Twenty20 series at Derby’s Incora Ground.

Glenn, in just her second international knock, top-scored with 26 from 19 balls to usher England to a competitive 151 for eight after they had lurched to 96 for six on a dry but chilly September evening.

Deandra Dottin and Stafanie Taylor helped the Windies to 72 for one in response but the established duo both succumbed to Glenn’s leg-breaks, part of a collapse which saw the tourists lose seven wickets for 24 runs.

Fellow spinners Sophie Ecclestone and Mady Villiers also took two wickets as the Windies limped to 104 for eight, meaning England can move into an unassailable 3-0 series lead when the teams meet again on Saturday afternoon.

England, who wore black armbands to mark a family bereavement, were grateful for their bowlers constricting the Windies after they themselves were unable to get going in their innings.

Six England batters reached double figures without anyone able to get to 30.

Tammy Beaumont made 62 on Monday to underpin England’s series-opening win and she picked up where she left off after the hosts were invited to bat first, using reverse and orthodox sweeps to take three fours in an over off Hayley Matthews.

But she failed to get sufficient elevation off Shakera Selman and a backtracking Chinelle Henry pouched at mid-on, with Beaumont’s departure for a lively 21 allowing the Windies bowlers to apply the brakes to a fast start.

They were let down by their fielders as Nat Sciver was dropped twice in two balls. But Sciver could not capitalise, stumped by one of the culprits, wicketkeeper Shemaine Campbelle, who was then quick to whip off the bails to run out Danni Wyatt as England lurched from 34 without loss to 45 for three.

Amy Jones (25) cast off the shackles with a towering straight six off Afy Fletcher but her inventiveness led to her downfall, a reverse sweep off Matthews looping to short third man while England captain Heather Knight perished for 17 after a sweep was caught in the deep.

After seeing off the economical Taylor’s wily off-spin, Glenn and Katherine Brunt provided some impetus late into the innings, the pair largely responsible for 40 runs coming from the last three overs.

Shamilia Connell leaked 19 of them in the penultimate over as her accuracy went missing before Sophie Ecclestone took back-to-back leg-side fours off Selman to help England to what seemed a challenging target at halfway.

Brunt was exemplary up front, conceding just four runs from her opening two overs and chipping in with the wicket of Matthews, whose leading edge was taken at short extra cover.

Deandra Dottin muscled Anya Shrubsole over deep midwicket for a six as she and Taylor settled to their task. The two established Windies stars looked purposeful and the game was in the balance when they were at the crease.

There seemed to be an element of panic setting in as England burned both reviews but they kept their composure and Glenn prised apart the union as Dottin played all around a regulation leg-break and was lbw for 38.

Jones’ handiwork saw off Lee-Ann Kirby while the England wicketkeeper came to the fore in the next over, as Taylor, who passed 3,000 T20 runs in her 28 from 31 balls, walked passed a Glenn leg-break and was stumped.

From there, it was one-way traffic as the Windies were unable to mount a fightback in an underwhelming conclusion, with England unrelenting in closing out an ultimately comfortable win.