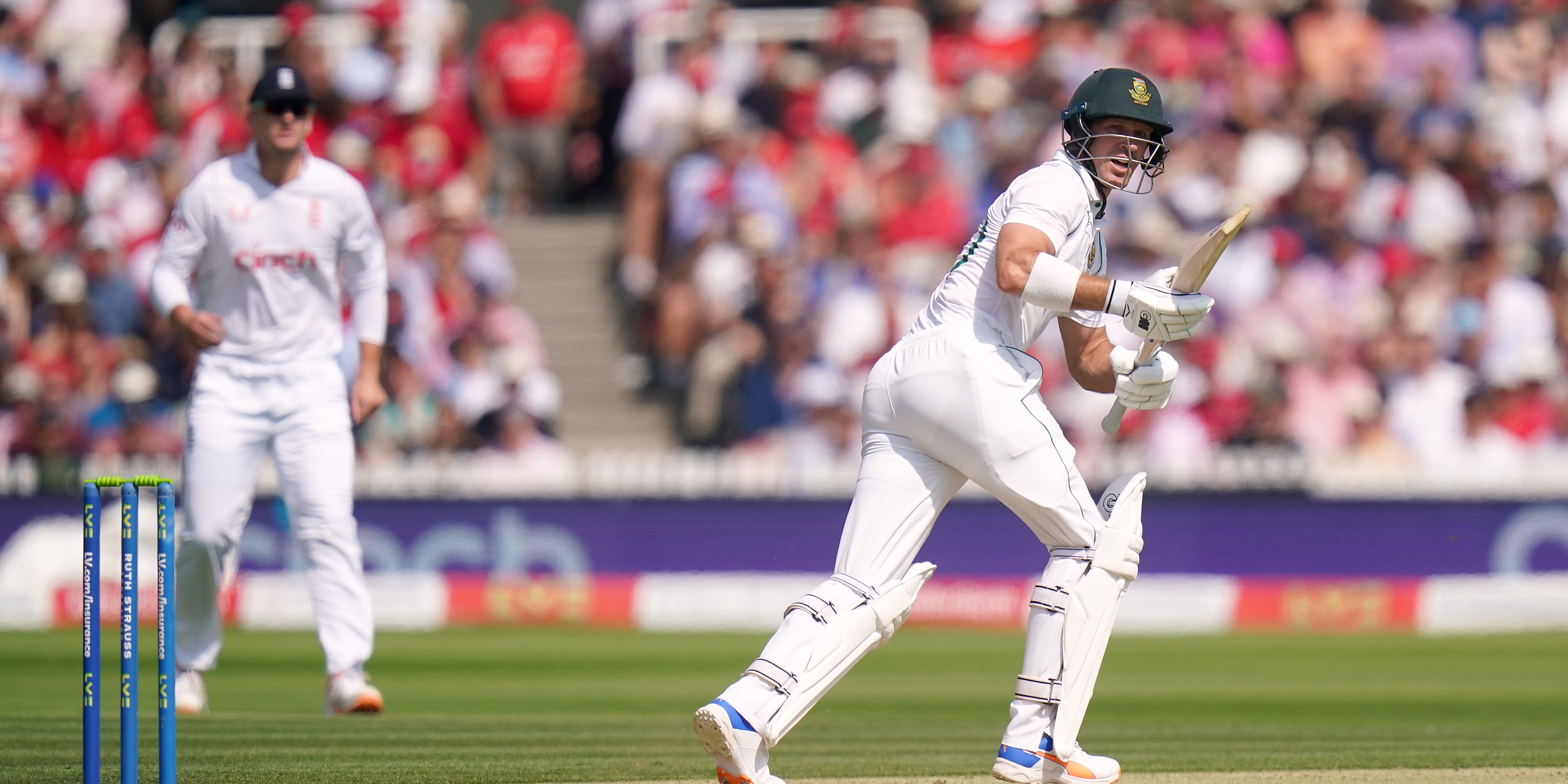 Sarel Erwee’s unbeaten half-century helped South Africa take further control of the first Test against England by moving within touching distance of a first innings’ lead at tea on day two at Lord’s.

Erwee shared an 85-run partnership for the opening wicket with captain Dean Elgar, who made 47 before he was dismissed in unfortunate circumstances to become James Anderson’s first wicket at the age of 40.

It was a rare highlight for England during a tough afternoon session where Matthew Potts was the only other home bowler to earn reward with their first innings’ total of 165 almost wiped out by the Proteas.

Opener Erwee backed up fine work at the start of the day by Kagiso Rabada, who claimed a five-wicket haul, to reach tea unbeaten on 60 with South Africa 158 for two and firmly on top.

After Elgar and Erwee negotiated a tricky 50-minute period before lunch, the pair made the most of some wayward bowling at the beginning of an extended afternoon session of two-and-a-half hours.

Potts was initially expensive, going for 36 from his first six overs, with Elgar clipping him to the boundary any time he drifted onto the pads of the South Africa captain.

The tourists’ skipper was eager to cash in after two close shaves, successfully reviewing a caught behind off Stuart Broad before Zak Crawley put down his thick outside edge off Potts on seven, but Anderson received a slice of luck to make the breakthrough.

Elgar was three away from fifty when despite smothering Anderson’s delivery, the ball ricocheted off his elbow guard and rolled back onto the stumps with the bails dislodged.

Ben Stokes’ decision to turn to Anderson had worked but Erwee remained unflustered at the other end.

The Proteas new opener started after lunch with two fine drives for four before he took advantage of England’s attacking field with four slips to help himself to a succession of singles and twos in his fifth Test.

Erwee reached his half-century off 89 balls when he guided the ball through cover for a boundary off Broad, back on earlier than expected after Stokes worryingly cut short his stint following four overs having pulled up earlier in the session while fielding.

Broad should have run out Keegan Petersen not long after Erwee’s milestone, but missed with three stumps to aim at and threw wide of his captain after the South Africa number three had raced down the wicket.

Potts did end Petersen’s breezy knock of 24 when he found the outside edge and Jonny Bairstow did the honours at third slip.

Rabada had been the key figure earlier in the day with the scalp of Ollie Pope crucial in dismissing England for 165.

The hosts resumed on 116 for six and all eyes were on Pope but he failed to make the most of a life from the sixth ball of the morning.

Pope edged Rabada to Erwee, who in comical fashion spilled the first chance, almost clung onto the second before he could not gather at the third attempt while falling over.

England’s number three played on soon after to Rabada having added only 12 runs to his overnight total of 61 and despite some brief positivity from Broad and Jack Leach, who both made 15, South African’s chief seamer dismissed the former with a slower ball.

Rabada extended his spell into a seventh over and earned his reward when he pinned Anderson in front for a golden-duck to claim five for 52, which put his name on the Lord’s honours board and wrapped up the hosts innings inside an hour of the second day.