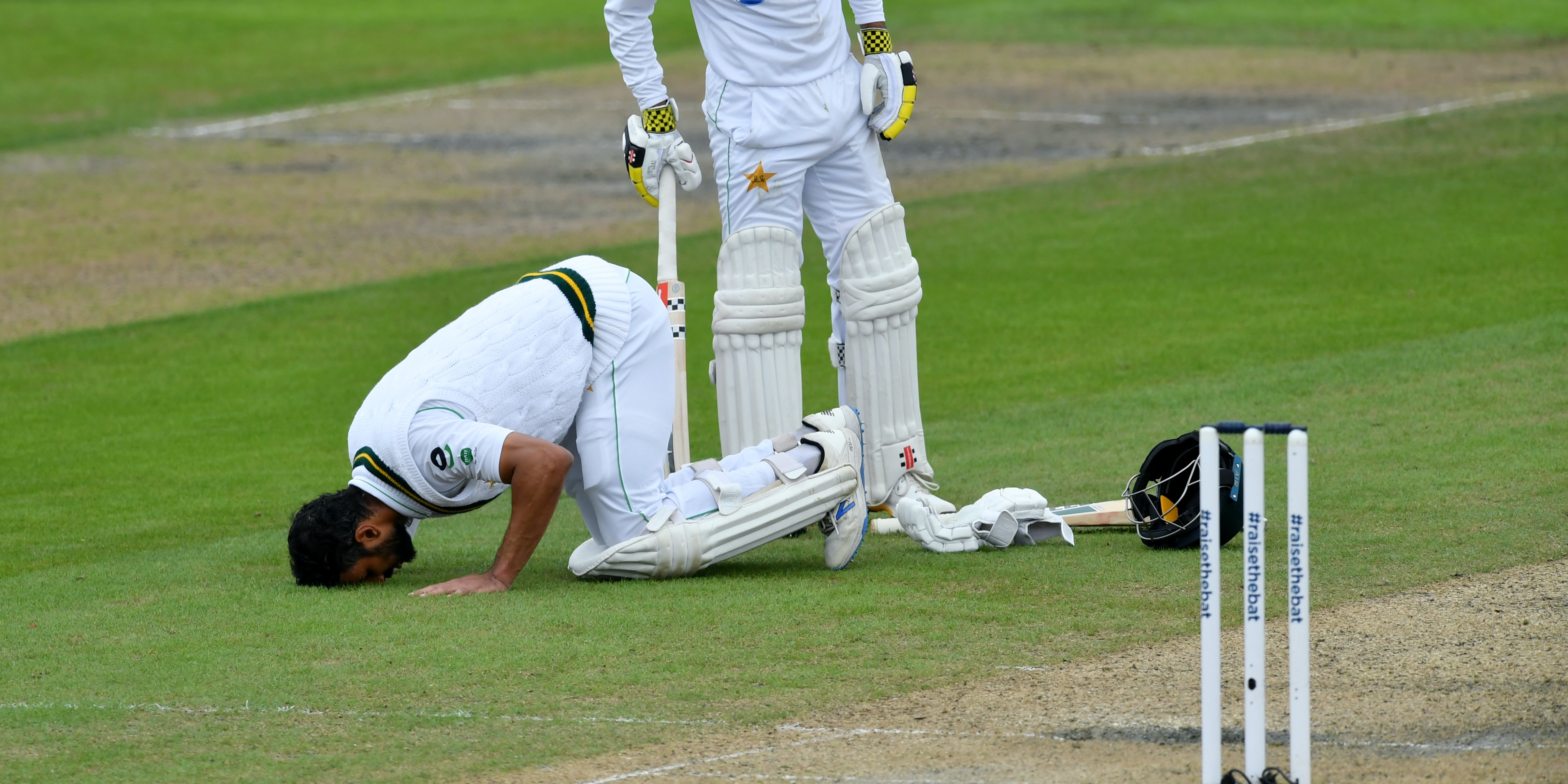 Shan Masood stood tall with a third successive century as Pakistan moved to 312 for eight on the second afternoon of the first Test against England.

Masood’s last two Test knocks saw him make tons in Karachi and Rawalpindi and he followed up with a career-best 151 not out in the vastly different conditions of Emirates Old Trafford.

The 30-year-old opener was reprieved twice by wicketkeeper Jos Buttler on 45 on day one, and took his opportunity superbly as he stretched his innings to 314 balls in 106 overs at the crease.

The hosts had worked hard to manoeuvre their opponents to 187 for five at lunch, taking three for 48 in a relentlessly disciplined opening session, only for a 105-run stand between the defiant Masood and Shadab Khan to turn the tables back in Pakistan’s favour.

Two wickets in two balls from Jofra Archer mitigated some of that progress, but Pakistan will be more than happy with their efforts thus far.

The morning began with a head-to-head between Babar Azam and James Anderson, the former picking up from a wonderful first day and the latter looking to kick up a notch after a modest showing.

It was the Englishman who came out on top, quickly and decisively. After putting Babar on alert with five probing deliveries he drew a loose drive with his sixth, a thick edge held soundly by Joe Root at slip.

At 38, Anderson has little to prove to anybody but having struggled against Babar on Wednesday, this was a point well made.

With the premier stroke-maker back in the pavilion, Anderson and Stuart Broad set about tightening their grip. Together they hammered out a probing line and length and dialling up the pressure with a 28-ball sequence that cost just a single.

The 29th brought deserved reward, Broad dropping just back of a length and getting enough bounce to hit the shoulder of Asad Shafiq’s bat and sail through to Ben Stokes at second slip.

By the time England made their first change of the day, their seasoned seamers had sent down 11 overs for 11 runs to grind Pakistan’s progress to a halt.

Archer and Chris Woakes did not allow the pressure to cease. While England reached some form of stalemate with Masood, who ticked along with growing confidence to 77 before lunch, Mohammad Rizwan was outclassed by an away-swinger from Woakes.

The game was at a crossroads as the afternoon began but five overs of spin from Root and Dom Bess allowed Masood and Shadab to ease into their work.

The pair added 27 runs to alleviate much of the pressure that had built before the break and took that approach on when Broad and Anderson shared the fresh Dukes.

The batsmen ran excellently, daring England to produce something special in the field and consistently getting away with it. Masood went moved into the 90s by poking Broad to the third man boundary and then repeated the stroke as he drifted wider.

A nudge for two off Anderson saw him to three figures in the 86th over of his occupation, bringing ecstatic celebrations from the man himself and his massed team-mates on the balcony.

With Shadab on the attack, Broad and Anderson were milked for 42 in eight overs, a stark contrast to their earlier work.

The partnership moved past three figures, a potential game-changer, before Shadab (45) hacked wilfully at Bess and skied a top edge to mid-on.

Buttler’s struggles continued when he dropped Yasir Shah on five, Bess again the victim, but Archer was quick to send him back lbw. Mohammad Abbas prodded the next ball to slip but the hat-trick chance came and went with a staunch defence from Shaheen Afridi.

Masood put his foot down with a pair of gung-ho sixes and a four off one Bess over to lead the charge past 300.