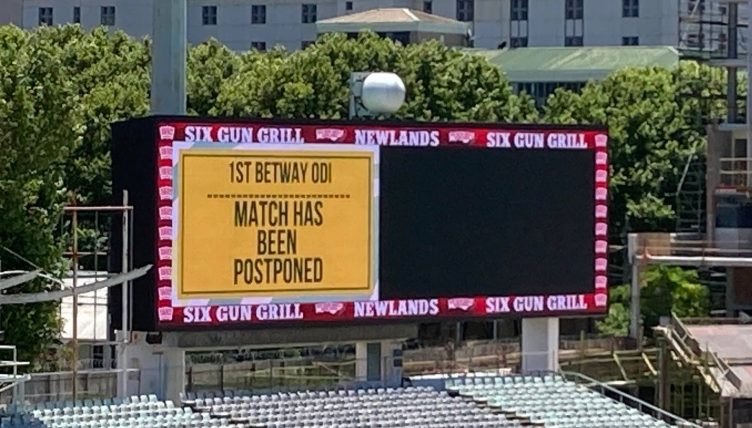 South Africa’s team doctor says England have rightful concerns about the safety of the bio-secure bubble they are in with the Proteas after a member of the home team tested positive for coronavirus.

A three-game one-day international series between the sides was meant to kick-off at Newlands on Friday, fresh from a hat-trick of Twenty20s, but the opener was postponed at the last minute after the positive results.

Given the security surrounding the bubble, it remains unknown how the positive results have been returned, but Dr Shuaib Manjra says England’s worries are valid.

Dr Manjra said: “Clearly there’s a cause for concern and England has expressed a concern. England is questioning their confidence that they have in the bio-secure environment and rightfully so.

“We’ve met with the English medical teams and planned out a way. We will retest all of our players and hotel staff tomorrow, which is Saturday.

“We’ll await the results and plan a course of action. Then on Tuesday before the final ODI on Wednesday, we will test the team again.”

Strict security measures mean players cannot leave the bubble unless accompanied by an official, leaving Dr Manjra with work to do to determine the source of the positive test.

“I can categorically state that no player was able to leave the hotel environment, simply by virtue of the fact there’s security around and the security will not allow a player to leave unless that player is leaving in an official assigned vehicle with an official driver,” he said.

“There’s a command centre here led by the colonel from the Claremont police force and they strictly enforce the bio-bubble. They wouldn’t allow anyone to leave. I’m basically saying it’s impossible to leave this bio-secure environment for any player or official.”

A pre-series round of testing was done to screen the squads, who are both staying at the Vineyard Hotel near the Newlands ground, and one Proteas player was found to have the virus.

The decision was then made not to host the match as planned on Friday but the sides still hope to play the three-match series in full, with the first game now set for Sunday in Paarl before returning for matches in Cape Town on Monday and Wednesday.

That plan clearly hinges on a fresh bout of testing and it is highly likely that any further confirmed cases would put the series at risk.

Ashley Giles, managing director of England men’s cricket, issued a brief statement following the postponement declaring himself “hopeful” that the matches could be successfully staged.

“On behalf of the England touring party and the ECB, I would like to thank Cricket South Africa for their collaborative approach to postponing today’s one-day international,” he said.

“Our number one priority is the health and safety of the England team and management group, and the correct decision was made following discussions between the two boards and respective medical teams.

“The England party will remain at its base in Cape Town on Friday and Saturday and we are hopeful that the three-match series will be played before we depart next Thursday starting with the match at Paarl on Sunday.”

South Africa had two players – understood to be Andile Phehlukwayo and David Miller – test positive ahead of the Twenty20 series between the sides and a further two players were asked to quarantine having been classed as ‘close contacts’.

The remainder of the squad returned a full bill of health ahead of the T20s, allowing those three matches to go ahead as planned.

Speaking to PA news agency at the start of the tour, England’s head coach Chris Silverwood addressed the possibility of further cases emerging.

He said: “Obviously we have to look after our camp, our main focus is on making sure everything in our camp is in order and that we observe the rules, regulations and protocols in front of us.

“Hopefully that keeps us safe. I’ll be led by the doctors but the ideal scenario is no one gets it.”