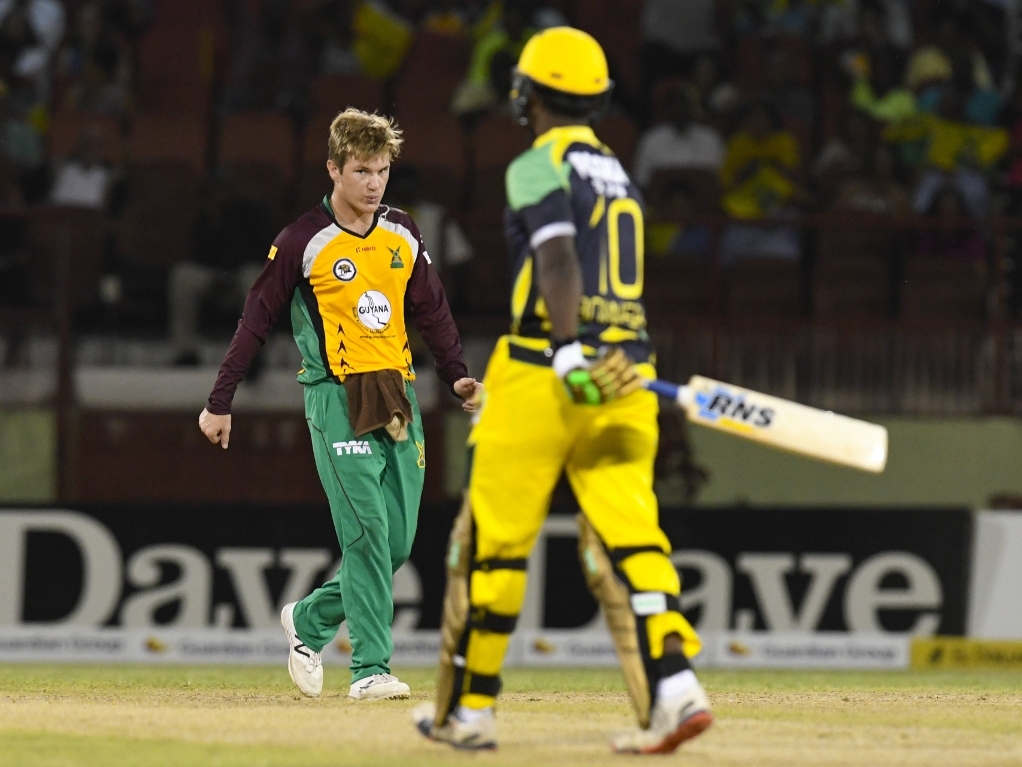 On a pitch where the spinners were dominant, the Guyana Amazon Warriors, and Jamaica Tallawahs produced a low-scoring contest in the Caribbean Premier League.

Having been put into bat the Tallawahs made a total of just 100. Their bowlers did a decent job in attempting to defend that target, but the Amazon Warriors emerged victorious.

Rovman Powell top-scored for the Tallawahs and for a long time it looked like his contribution would be the difference between the sides. Fresh from his match-winning innings of 77, against the Trinbago Knight Riders, Chris Lynn of the Amazon Warriors had other ideas.  Here the Australian made an impressive 39 not out from 35 balls to guide his side to the win.

The Amazon Warriors found batting no easier than the Tallawahs, as they reached 13-2 at the end of the six over powerplay in pursuit of 101 to win. Imad Wasim bowled three overs for the cost of just four runs at the start of the Amazon Warriors chase, picking up two wickets in the process. He finished with figures of 2-6 off his four overs, the third most economical bowling spell in CPL history.

Lynn played an uncharacteristically restrained innings, as he held the chase together. A partnership between Lynn and Jason Mohammed was worth 42 runs, but when that stand was broken by Shakib it was down to Lynn’s steadying hand to stave off defeat.

It would take something really special for the Tallawahs to defend the lowest score ever made at Providence in Hero CPL, and they came very close to doing just that. If they had managed another 20 runs they could well have been the winning side.

The Tallawahs got off to the worst possible start to the match, their captain and batting superstar Chris Gayle was dismissed lbw to Sohail Tanvir off the first ball he faced.

Things did not improve for the Tallawahs when Veerasammy Permaul came into the attack for the fifth over. First he had Kumar Sangakkara brilliantly caught by Mohammed on the mid-wicket boundary to a catch that needed a full length dive to be claimed. Then Chadwick Walton was out the very next ball, bowled when attempting a sweep.

Those two wickets meant that Rovman Powell and Shakib-al-Hasan were both at the crease, and neither man had faced a ball. On a typical Providence surface that was difficult to start on but got easier as a batsman got set, the two of them put on a brilliant partnership of 51 runs.

Shakib fell attempting pull a shorter ball from Permaul into the crowd at midwicket but he didn’t get all of it and it was a simple catch for that man Mohammed again. Permaul was the pick of the Amazon Warriors as he finished with a career best 3-20.

Adam Zampa was the second Amazon Warriors bowler to take two in two when he dismissed Nkrumah Bonner, and Andre McCarthy, in the space of two balls as the Tallawahs were bowled out with two precious overs left unused.

The one Tallawah to stand his ground was Powell who hadn’t played a T20 match before this year’s Hero CPL. He put together an extremely mature 39 from 42 balls, but at the other end the wickets kept on tumbling and in the end that is what cost the Jamaicans.