Strauss grateful after Lord’s raises close to £400,000 for foundation 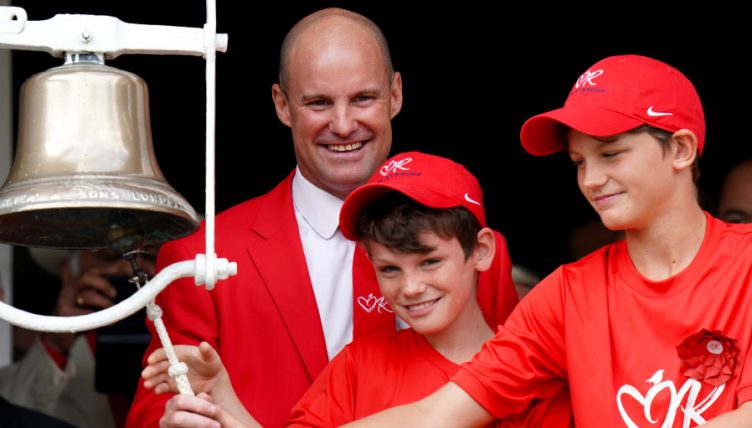 Andrew Strauss thanked the cricketing public and those at Lord’s that made it possible after day two of the second Ashes Test match saw £382,462 raised towards the Ruth Strauss foundation in honour of his late wife who sadly passed away at the age of 46.

The foundation was set up to offer care and support to the victims and their families of lesser-known forms of lung cancer after Ruth died from a rare form of the disease last December.

Lord’s was awash with vast swathes of red as the public, broadcasters, the members and journalists alike all showed their support for the burgeoning foundation.

The players also contributed, each team adorning red numbers on the back of their shrits and wearing limited edition red caps at the start of play which will be auctioned off towards the cause.

The former England captain, emblazoned from head to toe in  a red suit spoke of his appreciation for the efforts so many people had gone to on such an emotional day.

“Ruth was an amazing mum, wife and friend to so many, and she would have been blown away by the level of support. To see the players, fans, wider public and the cricket family come together has been phenomenal.

“Through these donations we will be able to provide grants for research and offer families vital emotional and well-being support throughout their cancer journey.”

The chief executive of the ECB, Tom Harrison spoke proudly of what had been achieved on the day, saying: “We are absolutely delighted to be able to support the Ruth Strauss Foundation which is very personal to many of us at ECB. We are so pleased today has proved to be a huge success.

“Andrew is not only one of our greatest players and most successful captains, he is also held in the highest regard as an individual across the game and around the world. Today, you saw first-hand the deep affection with which the Strauss family are held.”