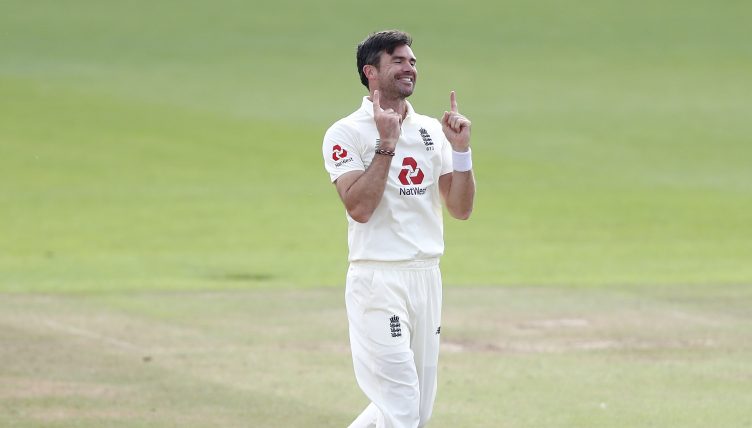 The 38-year-old is the fourth player to have claimed 600 wickets and he did it in just six deliveries more than Sri Lanka spinner Muttiah Muralitharan, who was the quickest to the achievement.

Anderson took his first Test wicket in May 2003 when he bowled Zimbabwe opener Mark Vermeulen and 17 years later he bagged his 600th.

Strauss told Sky Sports News: “It’s a great relief to all of us it’s happened. A special moment for him. 600 priceless rewards for 17 years of hard craft and toil for James Anderson. It’s a great achievement.

“He’s been extraordinary. His longevity – to play 156 Tests is extraordinary for any player, let alone a fast bowler.

“His record keeps getting better and better. We should be wary of saying he’s approaching the end. He’s fit and healthy and still has the motivation to keep playing.

“He’s gone past all the seam bowlers. He’s a modest guy but when he sits down this evening he’ll be savouring what he’s achieved in an England shirt and knowing him as I do he won’t be satisfied yet, he’ll still think there’s plenty of wickets out there for him.

“He’s still bowling 85-86mph now and that’s a great testament to his professionalism.”

Former Australia leg-spinner Shane Warne, one of the men to also achieve the feat, echoed the sentiments of Strauss.

Warne, who bagged 708 victims in 145 Tests, said in commentary on Sky Sports Cricket: “What a moment, what a very proud moment for Jimmy Anderson and for his family and his team-mates and everyone else involved in England cricket.

“It’s an outstanding achievement from Jimmy Anderson, and his longevity, and he should be extremely proud of what he has just done. 156 Test matches is a lot of games.

“It’s probably not the way Jimmy Anderson thought earlier in the year when he might have had the opportunity to get 600 Test wickets.

“It’s not probably the moment he thought of but it is going to be when he gets home tonight and when he sits there with his family he’ll be feeling pretty proud and pretty satisfied for all the sacrifices he made and the moment he actually got that chance.

“I’m not sure when the next Test match for England will be but he’s got that now and he’ll be able to put that to bed.

“Tremendous stuff from Jimmy Anderson. He’s been a good bowler, a great bowler for a long time and he’s not going anywhere in a hurry.”

Glenn McGrath is the second most successful fast bowler in Test history with 563 wickets and he wished he had the ability to move the ball the way Anderson has throughout his career.

McGrath told Test Match Special: “Looking through my career, the two that really stand out skill wise is Jimmy and Wasim Akram.

“What they can do with the ball, to swing it both ways, it’s a real art form. I wish I could have done a bit more with the ball than I did. I didn’t have the skill level that Jimmy has.

“I’ll be keen to see what he’s going to do now because he’s set the bar that high – a bit like Sachin Tendulkar has. No one is ever going to catch Sachin in Test cricket for the amount of runs he’s scored, the matches he’s played. Jimmy’s done the same for fast bowling. And he deserves it.

“Absolutely incredible, I’m a big fan of Jimmy’s. Just the fact he’s still playing now, in his 156th Test match, which in itself is just incredible.

“The rigours, the stresses that fast bowlers put on their body day in day out, to turn around and front up and just work your backside off is just absolutely incredible.”