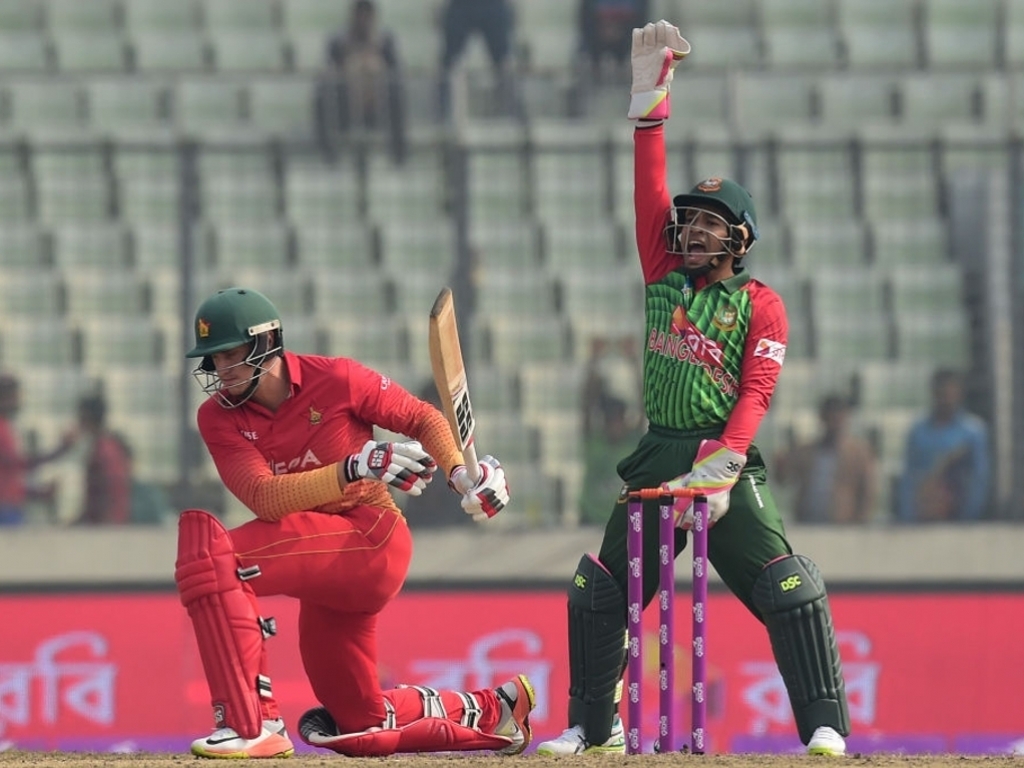 Zimbabwe head coach Heath Streak was left to rue a calamitous start after his side was condemned to an eight-wicket defeat at the hands of Bangladesh in the opening match of the one-day international triangular series played at the Sher-e-Bangla National Stadium in Mirpur, Dhaka, on Monday.

After being put in to bat first, within the first three balls of their innings the tourists had already lost the key wickets of Solomon Mire and Craig Ervine for ducks, leaving them reeling at two for two.

Zimbabwe failed to recover from that setback, although Sikandar Raza impressively tried to resist with a fighting 52 off 99 deliveries before they were bundled out for 170 in 49 overs.

Peter Moor was the only other Zimbabwe batsman to make a notable contribution with the willow as he chipped in with 33, while the veterans Brendan Taylor and Hamilton Masakadza could only contribute 24 and 15 respectively.

Shakib al Hasan, who rocked Streak’s charges with his double strike in the first over of their innings, finished as the best Bangladesh bowler with three for 43 in 10 overs.

There were also two scalps each for Rubel Hossain and Mustafizur Rahman.

“It was a disappointing start to lose two wickets in the first over . . . it was not an easy wicket – maybe 220 to 230 was probably a par-score on that – so trying to recover from that was tough,” Streak said after the match.

“Sikandar Raza, good effort with his fifty, got out at a crucial stage where I thought, if he had batted through to near the end, we might have gotten to the 200 mark which would have given us a little bit more to try and defend.”

#BANvZIM – @ZimCricketv head coach Heath Streak left to rue first-over calamity after watching his side fall to @BCBtigers by eight wickets in the opening match of the tri-series, also involving @OfficialSLC, played in Dhaka on Monday #TriSeries pic.twitter.com/BZGjIZwghD

Zimbabwe’s total was always going to be difficult to defend, but the task got even tougher as their bowlers struggled with their lines and lengths in the chase.

“Also, in the field we were not good enough and we got off to another poor start,” Streak lamented.

“We gave Biljoy (Anamul Haque) and Tamim Iqbal a few easy boundaries. When you are defending 170, you can’t afford to give easy chances or opportunities away.”

Tamim Iqbal struck an unbeaten 84 to wrap up the comfortable victory for the hosts with 129 balls to spare.

Raza shone again, this time with the ball, as he claimed the only two Bangladesh wickets that fell in the game.

In the next match scheduled for Wednesday at the same venue, Zimbabwe will face Sri Lanka.

“We need to be better next time, when we play Sri Lanka. We know we have done well against them in the recent past, so we’ve got to pick ourselves up off the canvas and fight back hard,” Streak said.