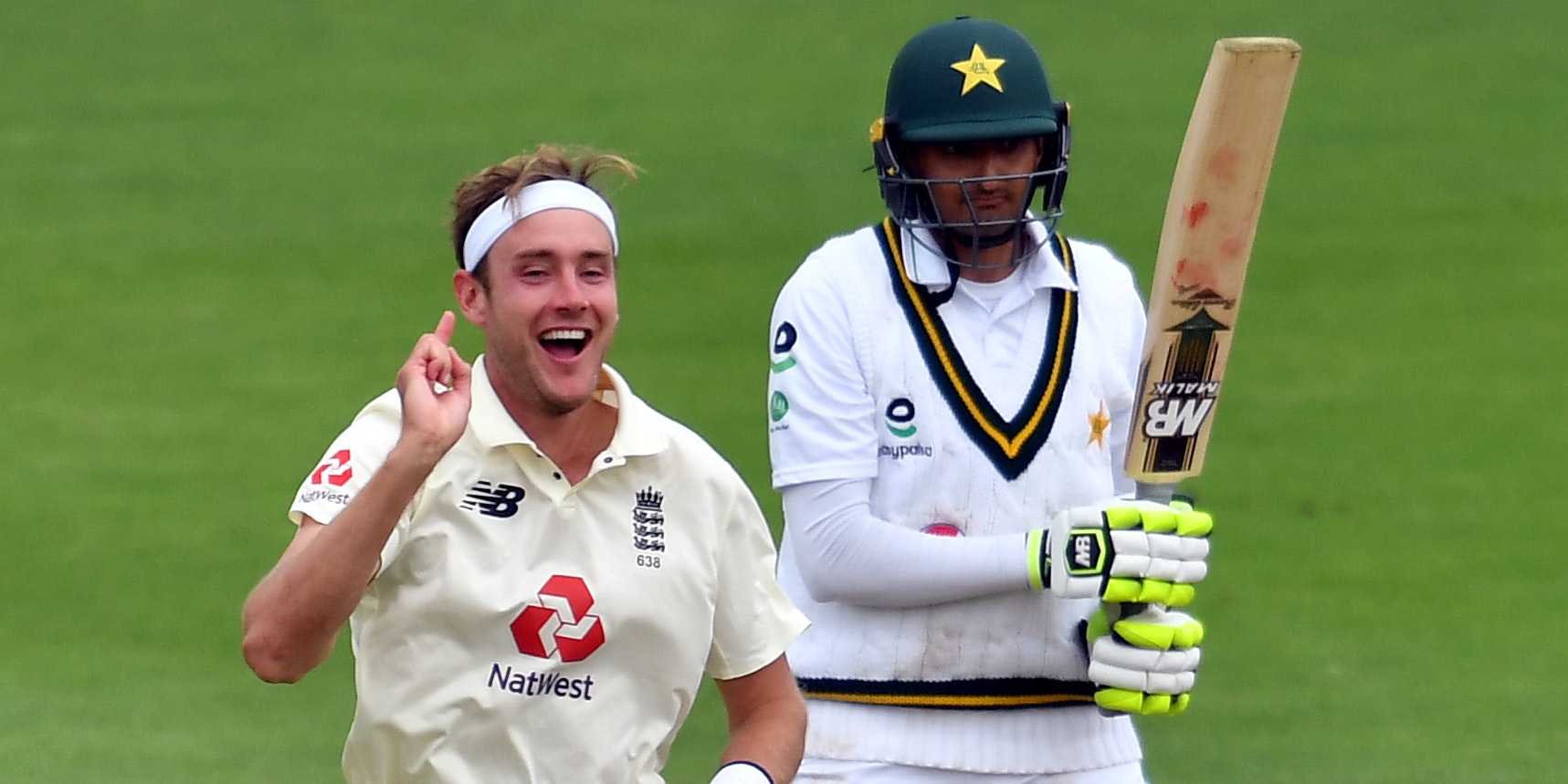 Stuart Broad is confident there is still enough life in the Ageas Bowl surface for England to push for a series-clinching victory in the second Test, despite conditions conspiring against the players for a second successive day.

Just 86 overs have been possible across two dank days in Southampton, meaning another 94 have been lost to a combination of rain and bad light.

Things have progressed reasonably quickly when the players have found their way to the middle, with the tourists reaching 223 for nine before the umpires deemed the visibility to be compromised on Friday evening.

Both sides had reason to be disappointed by that judgement, England denied the chance to wrap up the first innings and Pakistan missing out on the chance of bowling under the same leaden skies that helped Broad and James Anderson pick up three wickets apiece.

“It still feels a result pitch, we just need the light and the rain to play ball,” said Broad after a 40-over day in which he took two of his side’s four wickets.

“Even with losing a bit of time in this game, it feels we could get a result on this pitch.”

Broad was sympathetic to umpires Michael Gough and Richard Kettleborough, who were spared a barracking for dragging the teams back to the pavilion by the absence of fans in the bio-secure bubble, suggesting their duty of care trumped any desire to advance the match situation.

“It’s a tricky one because player safety is very important. If you have bowlers bowling at 85mph-plus and it’s gloomy out there, it can be dangerous for batsmen,” he said.

“The officials were right to bring us off, it had dropped below the darkness that we had come off for earlier in the day and all of our fielders were saying ‘we wouldn’t want to bat in this, this is quite dark’.

“There’s been occasions in Test cricket when there’s been a crowd and we thought we could have been on the pitch but today has been gloomy all day and it has felt like it’s been slightly on the dark side of being suitable to play.”

His new-ball partner Anderson was less able to mask his desire to get more game time in but accepted the decision.

“We’re a little bit frustrated we didn’t get a chance to finish them off but the light has been gloomy all day and we’ve been lucky to get the play we have,” he said.

“It was gloomy but it’s one of those when it didn’t seem like the batmen were struggling too much. I don’t know what the light reading was, maybe there could be a bit more leeway there.”

Pakistan’s Mohammad Rizwan, who was picking the ball up well enough to finish 60 not out at the close, suggested he was unruffled by the experience, adding: “I was ready to play but the decision rests with the umpires, and they have the responsibility to ensure no one gets injured. It’s the same for both teams.”

One suggestion to extend the playing hours is for similarly pink balls to substituted in when the floodlights take over – recreating the conditions of day/night Test cricket – but a pair of bowlers with more than 1000 wickets between them were agreed on the wisdom of that innovation.

“I don’t think we can change the colour of the ball when it gets a bit dark, I don’t think that’s a goer really,” said Anderson.

Broad, meanwhile, showed some rare solidarity with the men he has spent a career trying to get out.

“We’ve seen with the history of the pink ball under lights, it’s been very tricky for the batsmen and would be unfair to the balance of the game,” he said.

“You could lose five for 10, that’s going too far and complicating the situation. If the players’ safety is in doubt, the officials have to bring them off. If they think it’s safe, you play.”