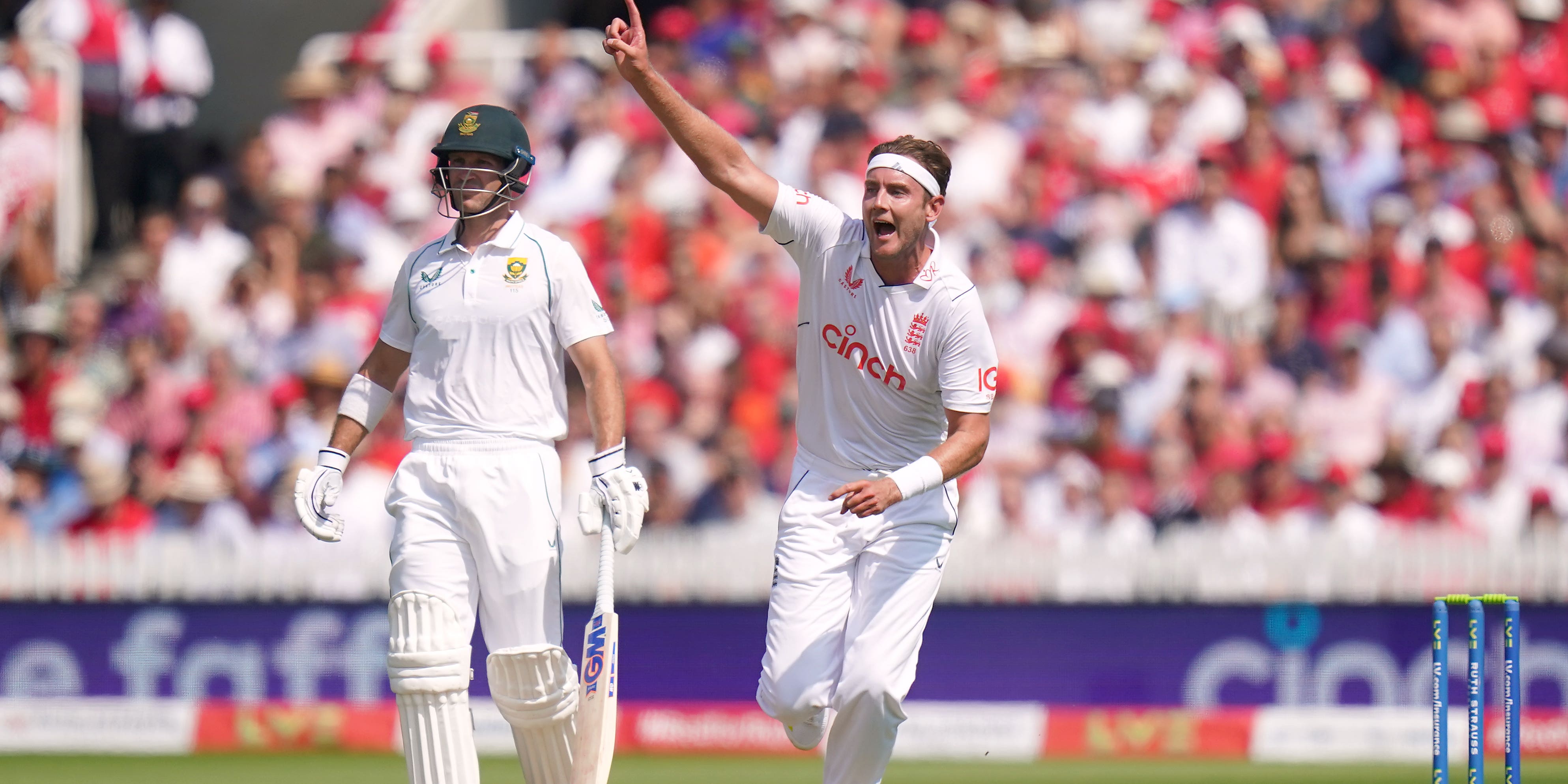 Stuart Broad insists England remain positive but conceded they need “a couple of great days” in the first Test against South Africa to continue their winning streak in red-ball cricket.

Ben Stokes inspired a much-needed fightback in the evening session on day two at Lord’s after Sarel Erwee’s 73 had threatened to take the match away from the hosts.

South Africa had reached 187 for three – replying to England’s 165 – only for Stokes to drag his team back into the mix with two wickets in seven balls and a third late on.

The Proteas ended the day 289 for seven and hold a 124-run lead, but Broad feels it is still all to play for.

“Anything above 150 on day four and five, you’ve got a chance if you bowl great and create pressure,” Broad said.

“We feel like tomorrow is a must-win day and we can come back and attack it.

“We’ve got a genuine feeling like we’re still in this game. I know South Africa are 120-odd ahead, but there’s no doubt it was pretty good batting conditions, particularly when the ball got softer, so that’s something we’ll want to take forward.

“When you get bowled out relatively cheaply in the first innings, you have got to make it a first versus fourth innings game. We’ve got to try and get enough ahead that we can try and defend on day four and five on a relatively dry pitch.

“The game is set up really nicely. Obviously we’re going to have to have a couple of great days, but we’ve proved this summer that anything can happen, so we feel really positive in the changing room that we’ve got ourselves back in the game.”

Stokes, despite seemingly carrying a problem with his left knee, made himself the enforcer during the evening session and it paid off.

The England captain bounced out Erwee during a devilish spell of two wickets in seven balls which also accounted for Rassie van der Dussen.

Erwee had put on 85 for the first wicket with Dean Elgar to help the tourists’ maintain their dominance having used barely an hour to bowl out England from their overnight total of 116 for six.

Broad said of his skipper: “He’s doing OK. I think his knee just jars a little bit on the odd occasion but he seems to be coping and he’s pretty tough when it comes to that sort of thing.

“He carries an inspirational style about what he does. He’s all action isn’t he? He actually wanted to bowl from the Nursery End, he’s not a big lover of the Pavilion End because it drags him too close to the stump.

“We had to persuade him a little bit but once he settled and got moving, we needed a couple of breakthroughs and the bouncer to get rid of the opener was a cracker. You can’t play that.

“I thought that got us moving, that was a really big wicket. It gave us a bit of energy, got the crowd going and that’s what those players do.

“I didn’t get to see Ian Botham too much but (I did with) Andrew Flintoff and they put bums on seats because you want to see these guys and the theatre they bring. I thought Stokesy brought great theatre.”

Broad himself got Kyle Verreynne to edge behind for his 100th Test wicket at Lord’s while Leach, Matthew Potts and James Anderson all claimed scalps.

The latter celebrated his first Test wicket since turning 40 earlier this month and his partner in crime backed him to keep going.

He added: “It’s really special to see. I look at Jimmy and he’s not really changed physically since he was 35.

“As long as he keeps that competitive spirit and enjoyment, he can go for as long as he wants.”

Kagiso Rabada took three quick scalps, including Ollie Pope for 73, to earn a five-wicket haul which put him on the Lord’s honours board.

Erwee then helped the Proteas build on their strong position before an entertaining 72-run stand for the seventh wicket between Marco Jansen and Keshav Maharaj again changed the momentum before Stokes bounced out the latter for 41.

Erwee said: “We have got a bit of momentum with that partnership at the back end and with one of our bowlers getting a five-fer. If we rock up again with the same energy, I am sure we will stay ahead of the game.”