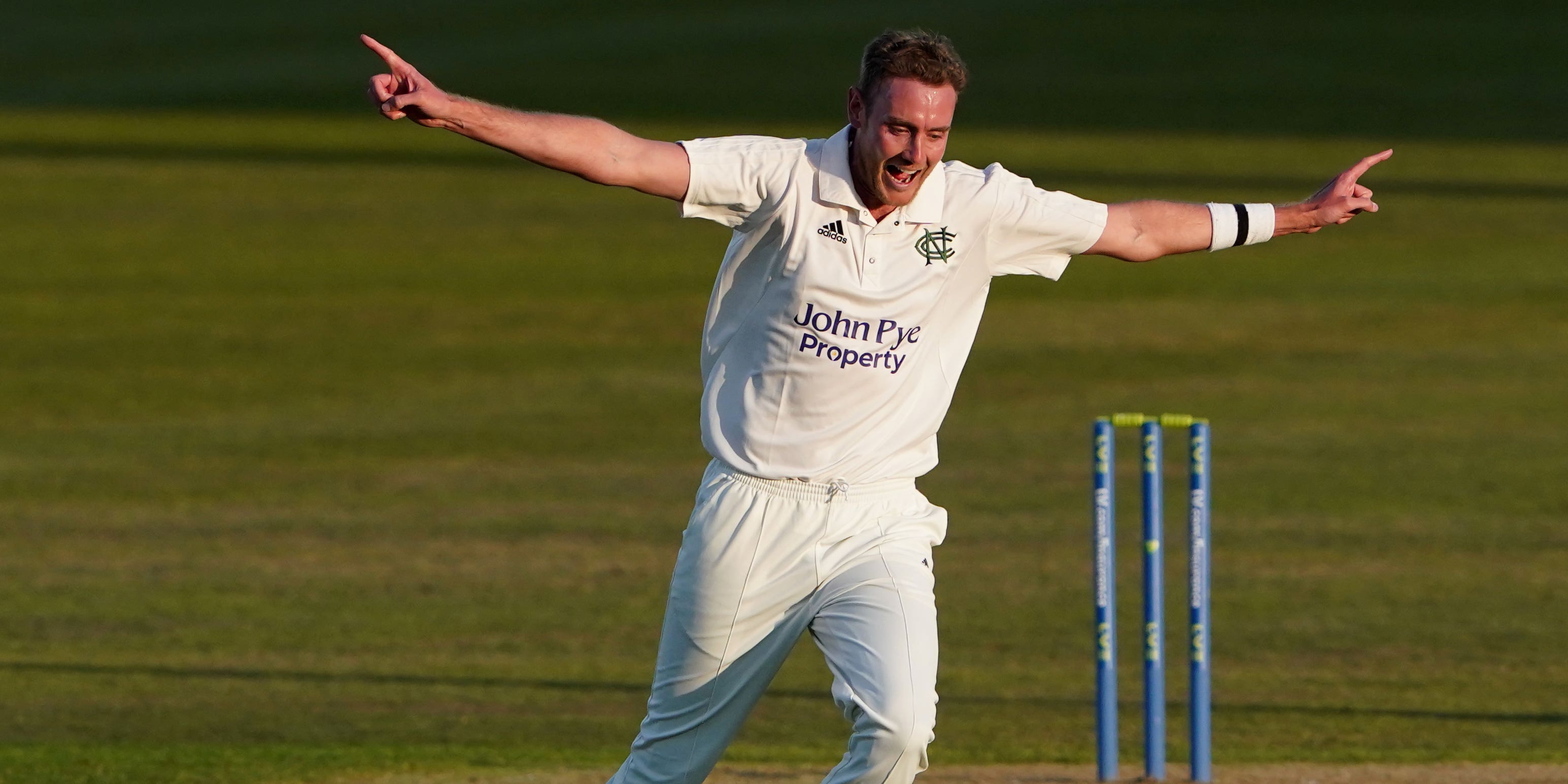 Nottinghamshire secured their first red-ball win since 2018 as they wrapped up a 310-run success over Derbyshire in the LV= Insurance County Championship.

England’s Stuart Broad was their chief inspiration on the decisive third day at Derby, taking four for 37 as the hosts were shot out for 159 having been set an improbable target of 470.

Nottinghamshire’s victory in the Group One clash might have been even more emphatic had number nine Will Aitchison not delayed them by hitting three sixes on his way to a maiden first-class 50.

Durham were also big winners as they beat Warwickshire by an innings and 127 runs at the Riverside.

Brydon Carse starred with bat and ball for the hosts, first hitting an unbeaten 40 as Durham declared on 391 for nine in their first innings, 304 ahead. Alex Lees earlier added three to his overnight 126.

Carse then took five for 49 as the visitors mustered just 177 in their second innings.

West Indies paceman Kemar Roach took a career-best eight for 40 as Surrey thrashed Hampshire by 289 runs in their Group Two meeting at the Kia Oval.

The visitors were bowled out for 179 having conceded a mammoth first-innings deficit of 468.

Surrey earlier declared on 560 for seven in their first innings with Jamie Smith making 78. Hashim Amla retired hurt on his overnight 215 due to a stiff neck.

Somerset closed on 104 for four having been set a target of 207 to beat Middlesex at Taunton.

Middlesex, with Steven Finn taking five for 77, claimed a first-innings lead of 89 after bowling Somerset out for 268 but were then bowled out for 117. Craig Overton claimed five for 34.

Somerset lost James Hildreth for 43 in their reply but captain Tom Abell remained on 43 not out as they pushed for victory.

Lancashire were sensing a chance to beat Sussex in their Group Three meeting at Hove after a fine fightback.

The Red Rose, who trailed by 98 after being bowled out for 230 in their first innings, hit back to dismiss Sussex for 154 the second time around.

Alex Davies (73) then got their pursuit of 253 off to a flying start as they reached 124 for two before stumps with Keaton Jennings 35 not out.

At the close, Northants’ hopes were in the balance having slipped to 94 for four chasing 220.

Willey first frustrated his old side with an unbeaten 41 to help Yorkshire recover from 86 for six to post 247 in their second innings. He then took a wicket and ran out Ricardo Vasconcelos for 41 as the visitors were left with much to do on the final day.

Leicestershire ended the day with a lead of 271 having reached 125 for three in their second innings against Gloucestershire at Bristol.

Chris Wright earlier took seven for 53 as Gloucestershire were bowled out for 275.

At New Road, Worcestershire reached 302 for five as they continued their response to Essex’s first-innings 561 for eight declared. Daryl Mitchell (67), Tom Fell (53) and Brett D’Oliveira (67) all registered half-centuries.