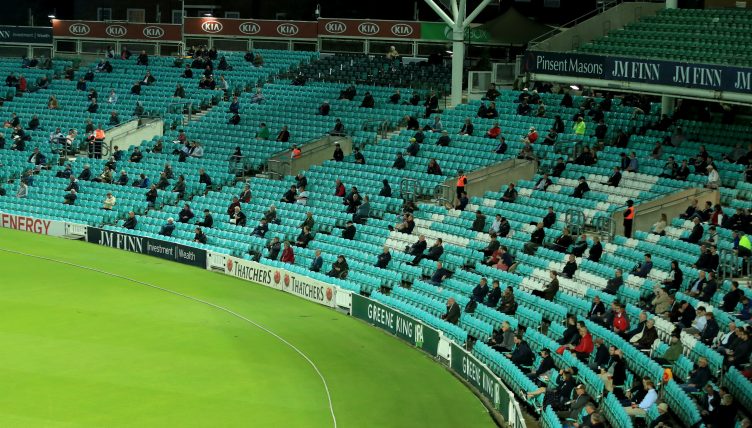 County cricket’s first live attendance of the Covid-shortened season saw Hashim Amla and Will Jacks steer Surrey to a nine-wicket victory against Hampshire in a Vitality Blast South Group match affected by rain.

It was Surrey’s first win of the summer, following four Bob Willis Trophy losses plus a tie, a no result and a defeat from their opening three T20 fixtures, and they were always in charge once Gareth Batty had won the toss and opted to field in front of 2,500 members at the Kia Oval.

Chasing 80 on Duckworth Lewis Stern, after Hampshire’s innings was delayed and then disrupted by the weather, Amla and Jacks put on 64 in 8.2 overs to ensure there would be no alarms as they chased down a total that always looked inadequate.

It took until the fourth ball of the final over, though, for Jacks to finish off Hampshire when, after six runs were still required from the last six balls, bowled by Ryan Stevenson, he top-edged a pull for his fifth four to reach 45 not out from 31 deliveries.

Jacks, meanwhile, twice lofted Afridi high over extra cover for boundaries and he also swept Mason Crane’s leg-spin for four before Amla thin-edged an attempted reverse sweep at Crane to keeper Lewis McManus to go for a 27-ball 29.

Some much-needed late hitting from Sam Northeast and James Fuller had earlier hauled Hampshire to 77 for five from their eventual 11 overs.

Northeast made a run-a-ball 31 before being caught at long-on in the final over, while Fuller smashed a flat six over square-leg off an excellent Gus Atkinson bouncer with a flashing blade to finish 17 not out.

Jamie Overton’s only over, on his debut for Surrey on loan ahead of his permanent move from Somerset this winter, went for 12 runs as Northeast cut and forced successive fours in the innings’ penultimate over.

As part of the government’s ongoing process of getting live crowds back to sporting events, the spectators in the ground initially found themselves frustrated rather than feeling fortunate as bad weather hit south London.

A long burst of applause rang around the ground when Batty led out the Surrey team to begin a match initially reduced to 17 overs-per-side, following an hour’s delay to the original start time of 6.30pm.

But, after just three overs, more rain arrived to drive the players off with Hampshire 21 for one.

Reece Topley had bowled two tidy overs for 10 runs but it was Jacks who grabbed the first wicket to fall, and his first in T20 cricket, when he turned an off-break to have Tom Alsop stumped attempting a big hit from down the pitch.

On the resumption, at 8.25pm, slow left-arm spinner Dan Moriarty bowled Felix Organ and then, in his second over, was delighted to see Rory Burns slide around the deep square-leg rope to hold a tremendous catch when Joe Weatherley swept powerfully.

Weatherley had hit the first boundary of the innings in the previous over, the fifth, with a sweep at Batty’s off-spin, but it was Surrey’s 42-year-old captain who then reduced Hampshire to 41 for four by having McManus held at point from a reverse sweep. Moriarty ended with the impressive figures of two for 12 from three overs.

The only crowds previously allowed into county grounds this summer before Thursday night were at the Kia Oval and Edgbaston for two pre-season friendly contests in late July between, respectively, Surrey and Middlesex and Warwickshire and Worcestershire.