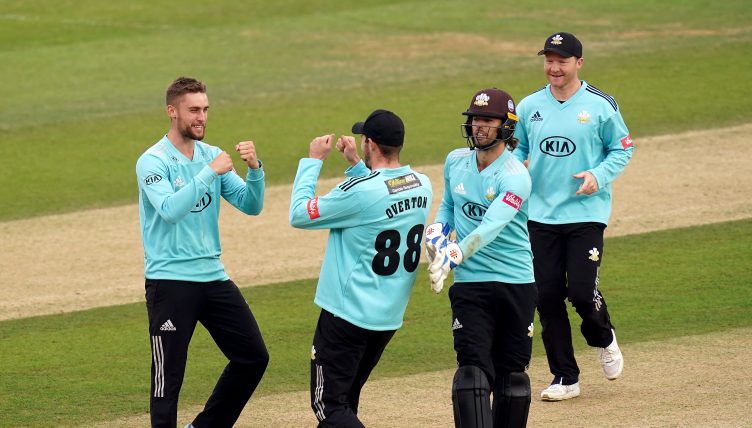 Will Jacks took four for 15 to destroy Kent’s star-studded top order as Surrey won their Vitality Blast quarter-final by 56 runs to reach Finals Day for the first time since 2014.

Jacks’ off-spin brought him his T20-best figures and reduced Kent initially to 51 for four at the Kia Oval, with England internationals Joe Denly, Zak Crawley and Sam Billings among his victims.

Kent eventually finished on 113 for seven, well adrift of Surrey’s total of 169 for two in which Hashim Amla and Jason Roy both hit controlled and classy half-centuries.

Lancashire reached Finals Day for the eighth time after thrashing Sussex by 45 runs in a low-scoring game at Hove.

Sussex appeared to be favourites when 2015 champions Lancashire were restricted 140 for eight after being put in.

But the visiting attack – particularly spinners Matt Parkinson, Tom Hartley and Liam Livingstone – did such an outstanding job that Sussex were dismissed for 95, their lowest total in the competition since 2011, in 17.2 overs.

Gloucestershire romped to their first Finals Day since 2007 with a seven-wicket quarter-final annihilation of Northamptonshire at Bristol.

The visitors could post only 113 all out after winning the toss, Tom Taylor top-scoring with 27, as Benny Howell claimed three for 16 and Ryan Higgins three for 24.

In reply, Gloucestershire breezed to 114 for three with more than eight overs to spare, Chris Dent leading the way with 40 and Ian Cockbain contributing an unbeaten 30.

It was much tighter at Trent Bridge where Nottinghamshire progressed to Finals Day in dramatic fashion – by virtue of having the higher Powerplay score against Leicestershire after both teams finished on 139 for seven.

Harry Swindells’ 58 looked like it would be enough for Leicestershire but Samit Patel had other ideas. Nottinghamshire needed 41 from 27 balls when he came to the crease and wickets were falling around him.

When Steven Mullaney went in the final over it looked bleak for the Outlaws but Patel struck 13 from his next five deliveries and Imad Wasim hit the runs to tie the game.