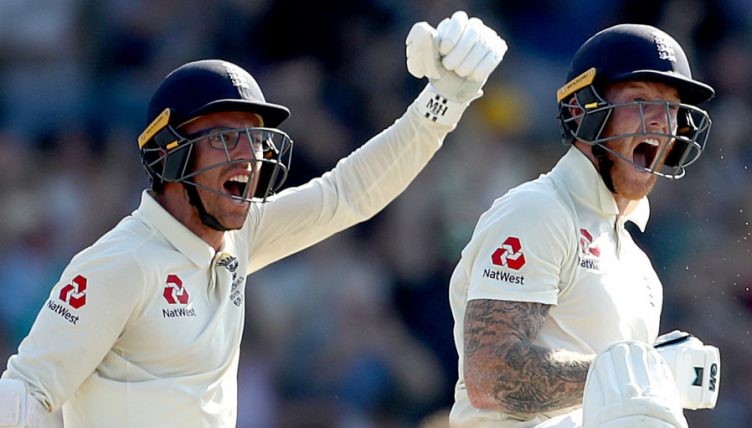 England’s new cult hero Jack Leach has revealed how Aussie counterpart Nathan Lyon declared the bespectacled one owes him a beer for the part he played in cultivating the myth of Leach via the bungled run-out opportunity at Headingley.

Leach put down his anchor with England’s Ashes hopes on the brink on that famous final day during the third Test, allowing Ben Stokes to bludgeon England to victory in spectacular fashion with 11 fours and eight sixes in an awe-inspiring 135 not out.

The tenth wicket partnership provided 76 runs in just 62 balls with Leach contributing just a solitary run, but his dogged survival at the other end provided the platform for England to square the series up going into the fourth Test at Old Trafford.

The narrative could’ve been so much different for both country and player, however, after Aussie chief wind-up merchant Nathan Lyon had fluffed his lines on a glorious opportunity to run Leach out with England requiring just two to win at the time.

READ: England should move on from Anderson and Broad axis – Vaughan

Now the man who has received a lifetime’s supply of free glasses from Specsavers has divulged what Lyon said to him as the England crowd serenaded Leach in the closing stages of the fifth Test.

“Yesterday, when I was batting at the end and over there [in the crowd] they were singing ‘stand up if you love Jack Leach’,” said Leach (via Wisden). “I just thought ‘what is going on?’”

“Nathan Lyon came over and said to me, ‘How many beers do you owe me [for the missed run-out]?’ I think I owe him a lot.

“Sport is fickle and I guess you have to enjoy the good moments and not get too down about the bad moments. I have had some luck as well. Hopefully you earn that luck through hard work, I will continue working hard.

“That was an experience for me, seeing how competitive Ashes cricket is. Nothing crossed a line, and fair play to both teams for playing in a great spirit.”