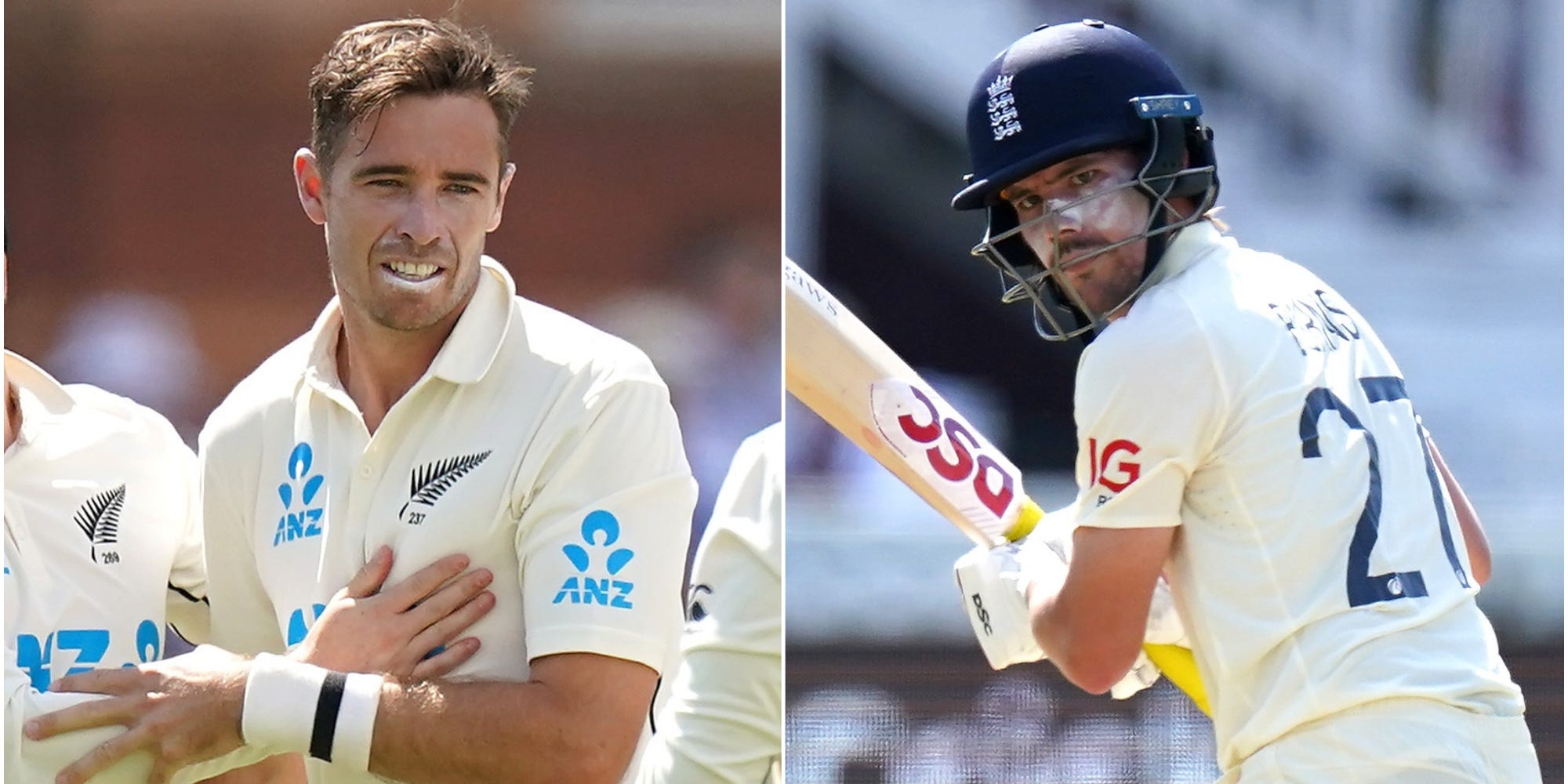 Rory Burns battled to a defiant century on his England recall after Tim Southee had swung the momentum in New Zealand’s favour on the penultimate day of the first Test at Lord’s.

Burns, who was dropped midway through the tour of India last winter following five single-figure scores in eight international innings, made a tenacious 132 out of England’s 275 all out.

The hosts had lurched from an overnight 111 for two to 140 for six, with Joe Root falling to the first ball of the day before Southee snared Ollie Pope, Dan Lawrence and James Bracey, but Burns showed admirable resolve, batting at a glacial pace for most of the day before accelerating after reaching three figures as he and James Anderson put on 52 for the last wicket.

Burns was last man out after nicking off to Southee, who finished with six for 43 in 25.1 overs, as the Black Caps claimed a 103-run first-innings lead, which they swelled to 165 after closing on 62 for two.

Ollie Robinson, who has had a turbulent week on his England bow, bowled fellow debutant Devon Conway before trapping Kane Williamson in front. While a draw is now the favoured outcome, the hosts face the prospect of having to bat to save the Test on the final day – even if all four results remain possible.

Robinson is not going to forget his debut in a hurry. On the day he made his Test bow on Wednesday, the 27-year-old issued an unreserved apology after tweets from 2012 and 2013, when he was in his late teens, that were racist and sexist in nature were unearthed and shared online. He is set to be investigated as part of the England and Wales Cricket Board’s disciplinary process and faces a fine or a possible ban for the social media posts. However, he followed up his four for 75 with a spirited 42 with the bat before taking the wickets of Devon Conway and Kane Williamson on the fourth evening. He could yet have an important say in the remainder of this match.

There is a lot of attention, and rightly so, on how James Anderson and Stuart Broad keep getting better with age. The same is true of New Zealand seamer Southee, who produced eye-catching figures of six for 43. That included the wickets of Ollie Pope, Lawrence and Bracey, all of whom departed within the space of 21 deliveries with the score on 140, to swing the momentum emphatically in New Zealand’s favour. Since the start of 2018, Southee, 32, has taken exactly 100 wickets in 20 Tests at a phenomenal average of 21.7.

Burns would have been forgiven for thinking his opener’s spot was more than a little precarious despite his recall – having been dropped for the final two Tests in India. He had failed to pass 33 in his previous eight international innings, with five single-figure scores. Yet the Surrey captain has built up his confidence with some striking form in the LV= Insurance County Championship this season, where he has averaged 61.55 in 10 knocks. Amid the tumble of wickets at the other end on Saturday, Burns kept his composure and deserved slices of luck on 77 – when BJ Watling missed a stumping chance – and 88 – when Southee spilled a chance at slip. A third Test ton goes some way to solidifying his position and the gritty nature of the knock itself lends some credence to a suggestion he might just have booked his seat on the plane to go to Australia to regain the Ashes this winter.

Lawrence and Bracey miss their chance

The absence of injured all-rounder Ben Stokes and rested wicketkeeper-batsman Jos Buttler has thrown up opportunities for Dan Lawrence and James Bracey, who would seem to be the obvious fall guys when the two more established players return later this summer. Both Lawrence and Bracey would have been hoping to make an impression on Saturday but the pair lasted just eight balls between them. Lawrence’s loose waft at his second delivery caught the edge and was pouched in the cordon off Southee, who bowled Bracey neck and crop after snaking one back through bat and pad. Both Lawrence and Bracey will be looking to have more of an impact, if required, later in the match.