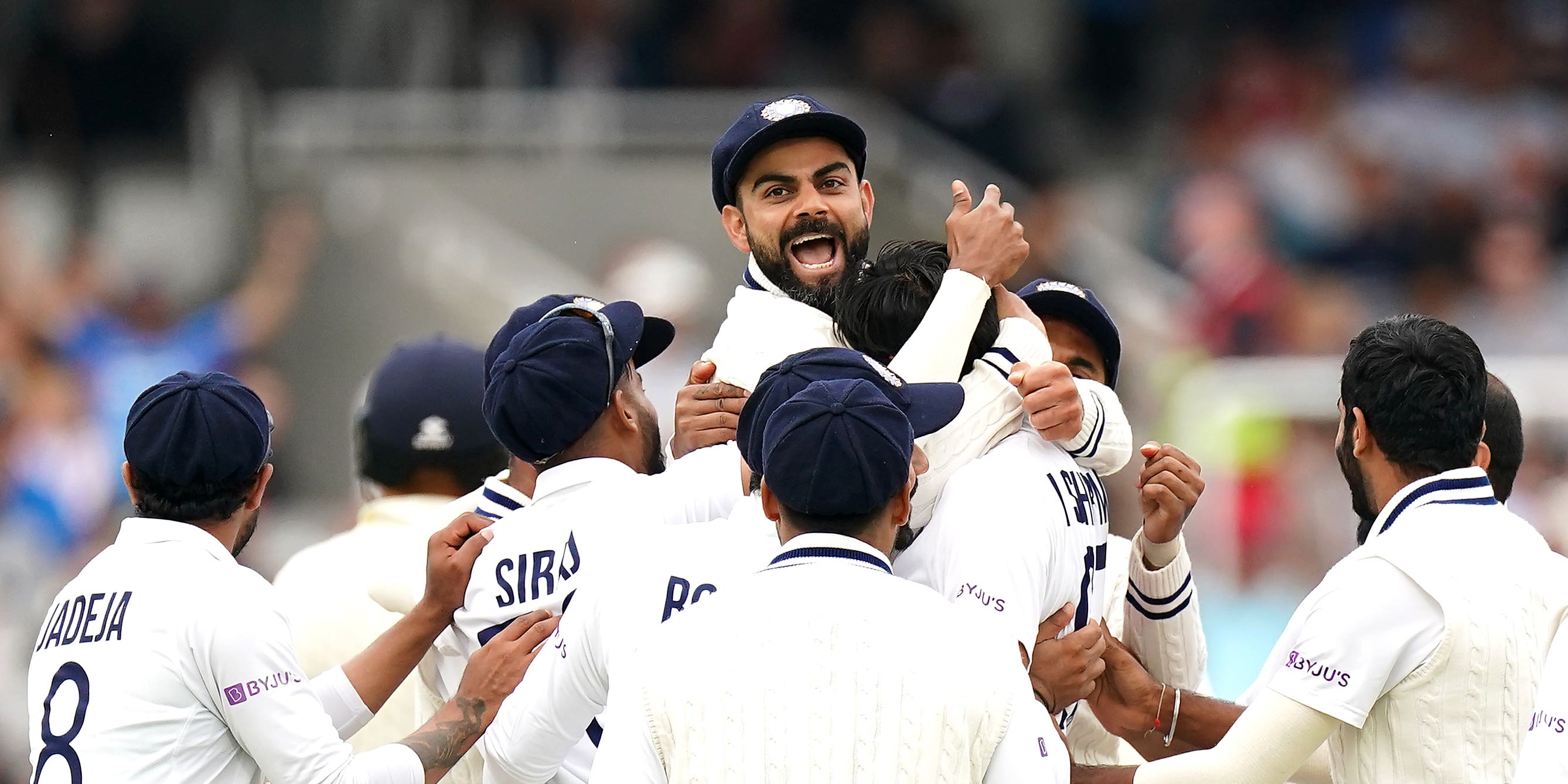 India claimed a famous 151-run over England at Lord’s after starting a gripping final day under a little pressure.

With the tourists holding a lead of 154 and just four wickets in hand, England were marginal favourites, but an unbroken ninth-wicket stand of 89 between Mohammed Shami and Jasprit Bumrah changed the complexion of the second Test.

England were given 60 overs to survive on the final day – or more improbably chase down 272 for victory – but subsided to 120 all out to fall 1-0 down in the five-match LV= Insurance series.

Here, the PA news agency looks at how an absorbing day five unfolded:

11:15am – England looked to be in the ascendancy when Ollie Robinson snared dangerman Rishabh Pant, who was undone by a little movement up the slope to edge behind to a grateful Jos Buttler for 22. At this stage India’s lead was just 167.

11:40am – A shrewd off-cutter from Robinson led to Ishant Sharma trudging off for 16, trapped in front with a review proving fruitless.

12:10pm – England’s tactics were provoking consternation, with several fielders out on the boundary for two tail-end batters. Shami and Bumrah advanced India’s lead to 200 as England’s bowlers went short to the pair.

12:45pm – Any thought of an England victory was quickly disappearing as Shami and Bumrah kept taking the attack to the hosts, putting on a priceless 50-run stand in just 14 overs. Shortly before lunch, Shami brought up his second half-century in his 53rd Test.

1:50pm – A Virat Kohli declaration seemed scarcely credible after Ishant’s wicket but England’s bowlers were finally put out of their misery, with Shami (56no) and Bumrah (34no) both recording career-best scores.

2:05pm – Bumrah makes near-immediate inroads with the ball. With his third legal delivery, Rory Burns gets a leading edge, as he looked to tuck to leg, with the ball looping gently to Mohammed Siraj at mid-off.

2:10pm – England were one for two after 10 balls when Burns’ fellow opener Dom Sibley was also out for a duck after getting a beauty off Siraj, who exploited a fraction of seam movement to find the outside edge.

3:10pm – Alongside England captain Joe Root, Haseeb Hameed had taken the sting out of the game in a 43-run stand. Hameed had been given a life but succumbed on nine after being given lbw following a hooping Ishant inswinger.

3:40pm – With the final delivery before the tea interval, England were four down with 38 overs still to go when Jonny Bairstow was rapped on the back leg. The not out decision was overturned and India were cock-a-hoop.

4:05pm – Just three balls into the resumption and India had the big fish as Root nicked into opposite number Kohli’s hands at second slip off Bumrah. The England captain made 33 to add to his 180 not out in the first innings but audibly muttered ‘oh no’ after edging into the cordon.

5:15pm – The writing may have been on the wall but no-one told Jos Buttler and Moeen Ali, as they resisted for 15.4 overs in a partnership that yielded just 23 runs. It was not without fortune as Buttler was dropped and Moeen caught behind off a no-ball. But Moeen was gone after Siraj located the outside edge, with Kohli taking the slip catch.

5:20pm – England were hurtling towards defeat when Sam Curran recorded a king pair as Siraj had two in two after inducing the edge.

6:25pm – Alongside Buttler, Robinson managed to halt India’s victory charge for more than an hour but he had no answer when Bumrah beat his defences, the fast bowler demanding a review when an lbw appeal was turned down.

6:30pm – England’s best hope of salvaging a draw was ended with 8.4 overs left when Buttler flirted at one outside off from Siraj, ending his two and a half hours of defiance, in which he made 25 from 96 balls.

6:35pm – England’s misery was completed as Siraj pegged back James Anderson’s off stump with 8.1 overs unused. The hosts had folded in less than two sessions.