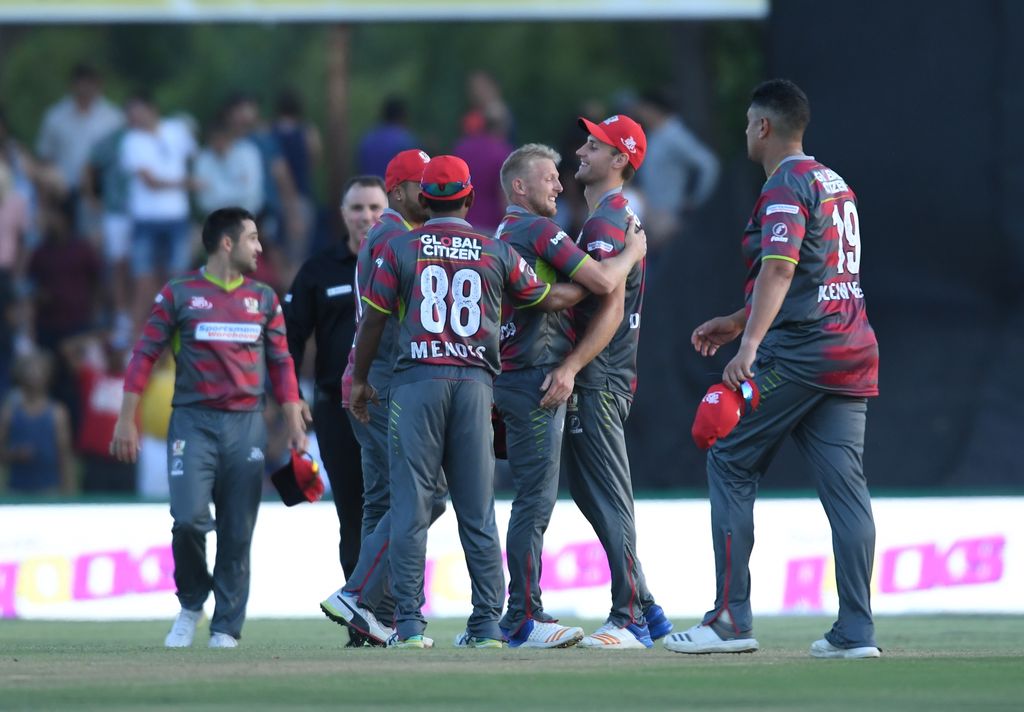 An exhilarating 405 runs were scored as the Mzansi Super League (MSL) produced a thrill-a-minute game that saw the Tshwane Spartans edge out the Paarl Rocks by one run at Boland Park on Sunday.

In the end it was perhaps a dropped catch by Dean Elgar that swayed the result in favour of AB de Villiers’ visiting side, whose 203 for five proved too much for the 202 for six by the host.

A six-bound strike in the final over by Patrick Kruger off Andrew Birch saw Elgar leap high on the boundary rope to try and catch it, which he failed to do, but the ball deflected off his face and body, back into the field of play changing six into two.

Those four proved to be the crucial runs that separated victory and defeat as the Spartans bounced back from Friday’s opening loss to the Cape Town Blitz with an unforgettable win.

In terms of the match, there were some amazing individual performances.

A brilliant 101-run opening partnership between Gihahn Cloete and Theunis de Bruyn set the away side up for a big score. They made the most of the batting conditions after their captain, De Villiers, lost the toss and was asked to take first strike.

The pair raced along freely at 10 to the over and smashed the balls to all parts during their opening partnership, which ended when De Bruyn fell for 66 off 38 balls (9 fours, 2 sixes).

Both then fell in quick succession as the Rocks hit back at the death thanks to three for 31 by Dwayne Bravo and two for 44 from Dane Paterson.

For the home side to come close, they needed something special and Cameron Delport provided that with his 73 off 43 balls (4 fours, 5 sixes) that kept them in the chase for most of the way.

They were 110 for two at one stage in the 12th over as Vaughn van Jaarsveld (22), eventually out to pick-of-the-bowlers Jeevan Mendis (2/35), did his best to keep up with the pace.

A brilliant 19th over for the Rocks, which saw Mangaliso Mosehle (20 not out) plunder two fours and a six, meant his side were favourites heading into that last over when only 13 were needed.

But Andrew Birch managed to concede 11 thanks to Elgar’s effort in the field – helping Tshwane secure a famous win.