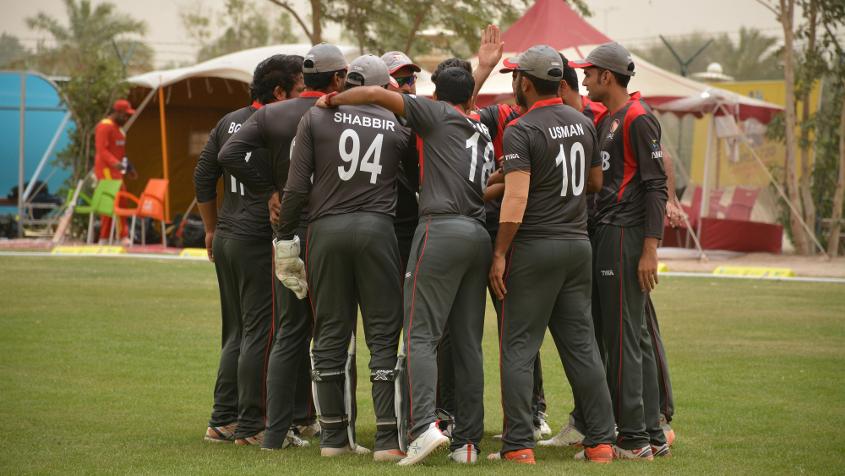 After a rest day, UAE and Qatar continued their winning streak on the 3rd match day of the ICC World Twenty20 Asia Qualifier A.

Saudi Arabia won against hosts Kuwait bringing them down at the Points table.

At the Sulaibiya cricket ground, Bahrain won the toss and elected to field against the favorites UAE. Bahrain did well to put the brakes on UAE by not allowing the UAE openers to score freely.

UAE put the 100 on board in the 14th over. Mohammad Usman took the charge for UAE and scored a brisk 52 off 33 deliveries which was well supported by Mohammad Boota’s 20 in 14 balls to post a respectable total of 149 for 9 in the allotted 20 overs.

Imran Anwar was economical in 4 overs for 17 runs whereas Sikder Billah picked up 3 wickets for 27 runs in his 3 overs.

Bahrain responded cautiously and lost first wicket with 20 runs on the board in 4.2 overs. Bahrain kept losing the middle order batsmen in quick succession as UAE bowlers completely dominated with their fine and economical spells.

Bahrain lost the track and could only score 98 runs for the loss of 8 wickets in 20 overs. Qadeer Ahmed picked up 4 wickets for 17 runs and was declared man of the match.

In the other morning match at Doha ground, Qatar won the toss and elected to bat against Maldives. Both the openers scored valuable runs with skipper Inamul haq scoring 41 runs in 33 balls.

Qatar’s posted 100 in the 13th over for the loss of 3 wickets. Mohammad Tanveer’s fine 53 off 41 deliveries helped Qatar to post a total of 149 runs on the board.

Middle order batsmen could not make any decent contributions and Maldives could reach 105 runs for 7 wickets in 20 overs. Mohammad Tanveer was declared man of the match.

Hosts Kuwait faced Saudi Arabia in the afternoon match at Doha ground. Saudi Arabia won the toss and invited Kuwait to bat first. Kuwait struggled to make a good start and lost 3 wickets in 5 overs posting only 10 runs on the board.

Albeit slow, Ali Zaheer and Ravija Sandaruwan started to build a partnership however it could only add 32 runs for the 4th wicket as Ravija was picked up by Usman Ali on 17.

Ali Zaheer 27 runs from 36 balls was the top scorer as Kuwait team bundled out for 92 runs in 19.3 overs. Saudi started off to a flying start as the openers put together 50 runs in 5 overs. Saudi chased the target of 92 runs in 11.5 overs.

Man of the match Usman Ali took 5 wickets for 23 runs in his 4 overs for Saudi.

UAE seems to be the only team comfortably placed and likely to secure one of the three qualifying spots. They play against Maldives on Tuesday while Qatar face Saudi and Kuwait play Bahrain in important matches to grab a place in the top 4 spots.