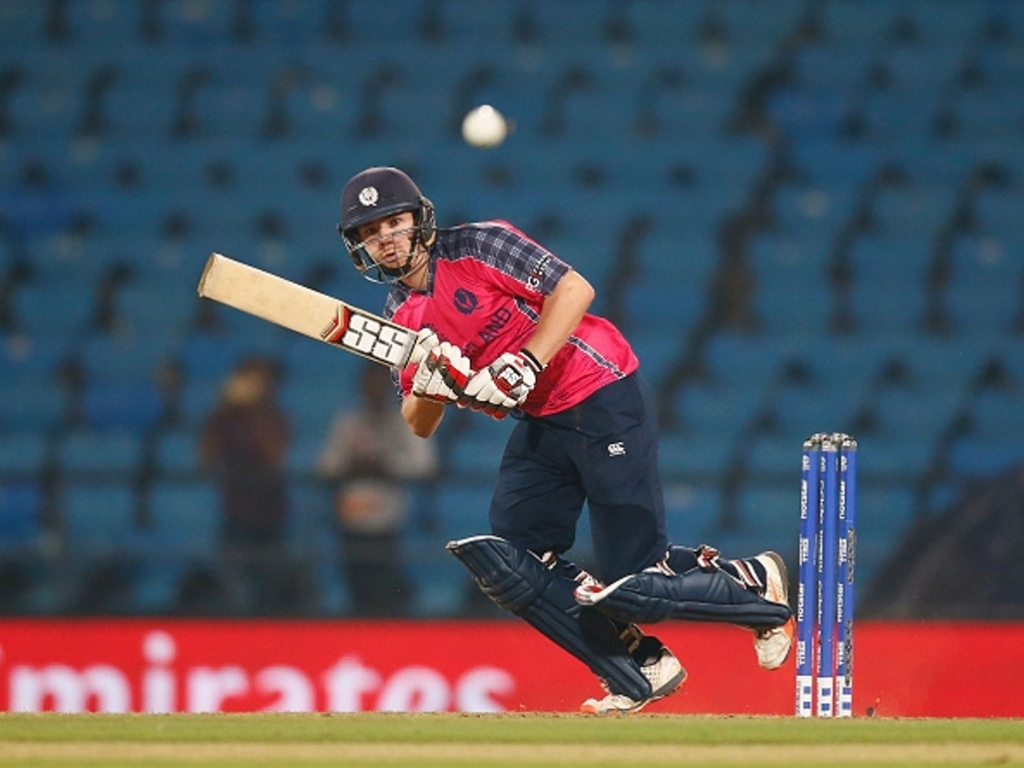 In the final group-stage match of the Desert T20 Challenge Scotland confirmed their position as winners of Group B after victory over second-place Oman at the Dubai International Cricket Stadium.

In a well-judged chase an unbeaten 35* from Calum MacLeod after Matthew Cross had scored 47 was enough to see Scotland home after Oman were dismissed for 133, and with Safyaan Sharif (3-33), Mark Watt (2-23) and Con de Lange (2-23) continuing their excellent run of tournament form with the ball the Scots go into Friday’s Semi-Final against Ireland in confident mood.

“I think that we’re yet to peak,” said captain Kyle Coetzer. “We’ve played some good cricket and we’ve done the job so far but I still feel there’s a little bit left in the tank yet so it will hopefully be exciting to see the guys express themselves on Finals Day.”

With qualification already assured thanks to Hong Kong’s demolition of the Netherlands the previous evening, Scotland made two changes to the side which beat the Dutch on Tuesday as Chris Sole and Michael Leask came in for Brad Wheal and Josh Davey.

Having chosen to bat as night descended Oman struggled to get their innings going in the face of tight bowling and regularly falling wickets. Scotland’s now-familiar opening ploy of spin and pace had served them well through the competition and it was again to bring early reward as Watt collected his two wickets within the first five overs, opener Arun Poulose (0) falling LBW to the left-armer’s first ball before Zeeshan Maqsood (17) skied one to MacLeod at deep midwicket.

The spin of de Lange and Leask (1-21) tightened the shackles still further as Oman scored at around five an over, reaching 53-2 at the end of the tenth, but the start of the eleventh was to bring a twin setback as Khawar Ali (14) chopped a ball from de Lange onto his stumps before, next up, Aqib Ilyas (20) was run out after a smart pick-up and throw from Richie Berrington. It was a wicket which came at a price, however, as the Scotland man was forced to leave the field, his hand to his hamstring.

Sole (0-22) followed up his impressive debut in the ODIs against UAE and Hong Kong last summer with a fiery performance in his first T20I and was unlucky not to be rewarded with an entry in the wickets column. His economy rate of 5.50, however, will give the Scotland selectors a welcome factor to contemplate as they consider their team for the potential double-header on Finals Day.

That Oman fought their way into three figures was largely thanks to Ajay Lalcheta (20) and Khurram Nawaz (23), but their total of 133 all out was never likely to be enough.

Oman needed quick wickets in reply, but Bilal Khan’s early drop of Kyle Coetzer off slow left-armer Zeeshan Maqsood proved to be telling as he and opening partner George Munsey got away to a good start.

Maqsood was to finally get his man in the seventh, however, as Coetzer (25) was trapped LBW, and when Munsey (15) followed in the ninth after a terrific caught-and-bowled by legspinner Khawar Ali Scotland were suddenly in danger at 48-2. Matthew Cross and Calum MacLeod got the scoreboard moving again, however, with Cross hoisting the first maximums of the innings as Scotland moved closer to their target.

It took a good catch at cover from Poulose to remove the Scotland wicket-keeper three short of his half-century, but with only 15 required from the final three overs the result was assured and MacLeod duly sealed the seven-wicket win with an over to spare.

And so to Finals Day and a much-anticipated meeting with their neighbours from across the Irish Sea.

“They’re always good battles and we’re looking forward to it,” said Coetzer. “[We have] three wins from three and it’s nice to hit the ground running and play Ireland when they are maybe going through a slightly trickier phase. Hopefully if we can put them on the back foot early we can catch them.

“Ireland have a very fine side so we’ve got to be on our game and take the attack to them. [But] T20 cricket is about expressing yourselves and showing your skills and I think we’ve still got a bit to show. There’s no better place to do that than in a Semi-Final.”