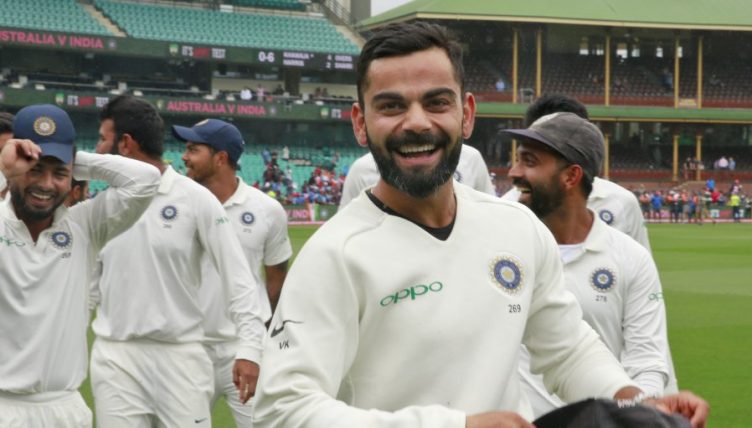 The 2018 ICC awards have confirmed what cricket fans have long suspected: Virat Kohli is good.

India’s captain and hero has become the first player ever to sweep the top three awards available in the annual shindig, winning the Sir Garfield Sobers Trophy for ICC Cricketer of the Year on top of the Test and ODI player of the year gongs after what was a pretty insane year for the great man.

He is also entrusted with captaining the Test and ODI teams for Team Earth’s still sadly hypothetical Super Series against Mars. Come on, boffins.

South Africa’s Kagiso Rabada came a distant but worthy second to Kohli in both the overall and Test categories, with Afghanistan leg-spinner Rashid Khan second in ODIs.

Kohli, who also won the Sir Garfield and ODI trophies last year, said: ‘It feels amazing. It’s a reward for all the hard work that you do throughout the calendar year. I feel really grateful and very, very happy with the team doing well at the same time myself performing.

‘Having recognition at the global level from the ICC is something you feel proud of as a cricketer because you understand that there are many players playing the game.

‘To be rewarded in this manner from amongst all of them is obviously a very proud moment for me and something that gives you more motivation to keep repeating the same things because you have to keep the standard of cricket up and keep bringing in consistent performances. From that point of view, these awards give you that extra motivation.’

There were no England players in a Test team of the year built around a Kiwi-flavoured top order and a tremendously varied bowling attack. Mind you, the Martians will feel right in the game if they can pick up early wickets; Earth have got a lengthy tail here.

Congratulations to the ICC Test Team of the Year 2018!

It’s a different story in the ODI team, where the undeniable fact that we are currently living in bizarro world *casually gestures around at… pretty much everything* is confirmed by the presence of four Englishmen in a power-packed top seven. Kohli and Jasprit Bumrah are the only two men to make both teams.

Aaron Finch’s world record 172 against Zimbabwe earned him the men’s T20I performance of the year award, while Scotland’s Calum MacLeod took at the associate player of the year award after producing two of the year’s standout ODI performances with 157 not out against Afghanistan in the World Cup qualifier and 140 not out in Scotland’s memorable victory over England. A thoroughly deserving winner and good to see the award going to an actual associate player after Rashid Khan won it last year.

Kane Williamson’s reward for being the second best batsman in the game right now is the pat-on-the-head Spirit of Cricket award, while India’s gobby but brilliant young keeper-batsman Rishabh Pant takes the emerging player award.