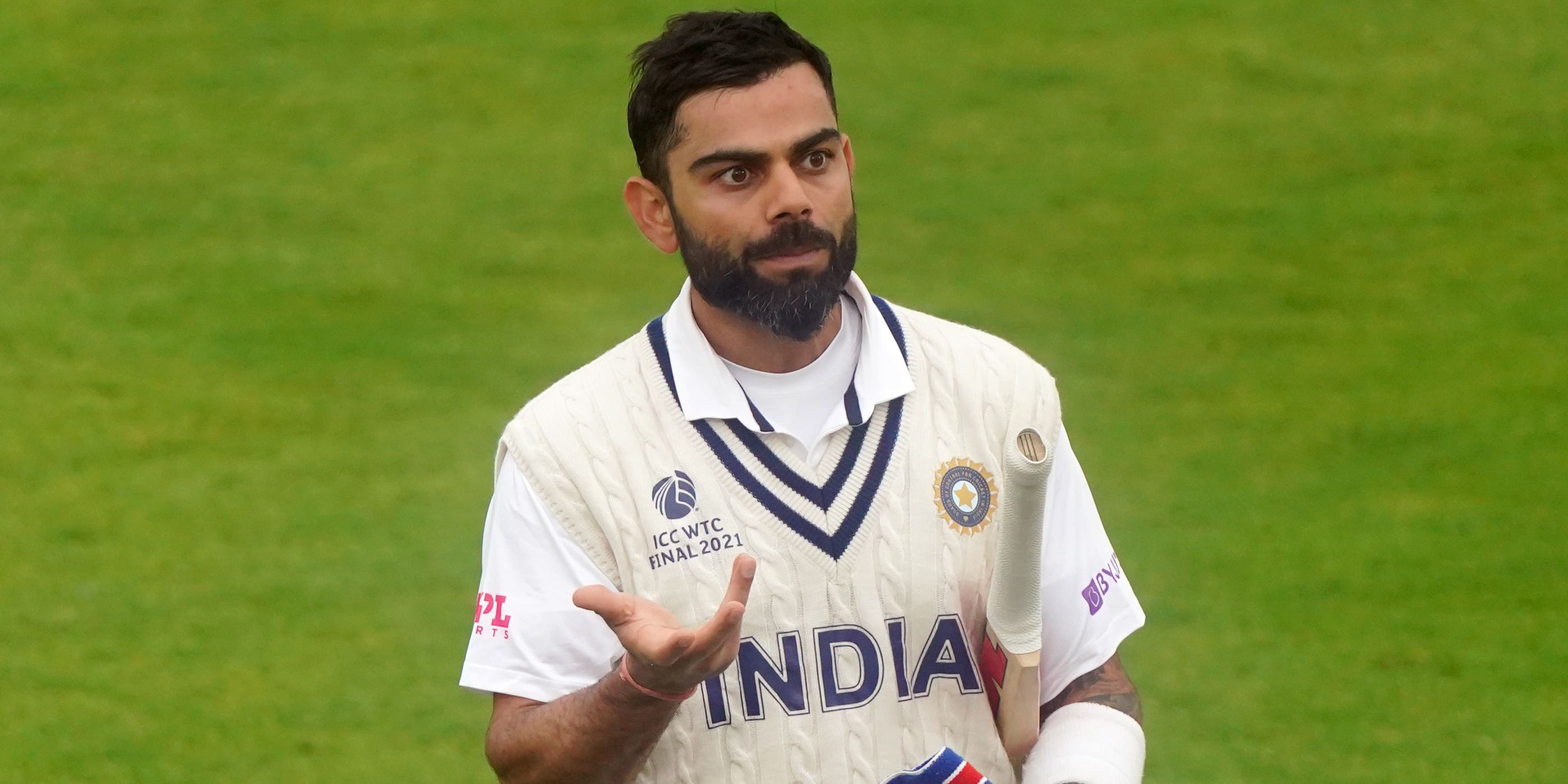 Virat Kohli led a battling effort from India’s batsmen as they tussled with New Zealand for control of the inaugural World Test Championship final at the Ageas Bowl.

The winner-takes-all showpiece finally got into its stride on day two after Friday’s washout, with India reaching 143 for three, but an intriguing contest was not allowed to play to its natural conclusion as the last of three separate breaks for bad light brought an early conclusion after 64.4 overs.

The picture could easily have been worse for India had they faltered under the kind of stiff examination that downed England at Edgbaston last week, but Kohli shepherded his side through with a resolute 44 not out from 124 deliveries.

His hunger to occupy the stage had already been in evidence when he remonstrated with the match officials during a curious incident when he was still on 17.

Kiwi captain Kane Williamson allowed the DRS clock to run down following a big appeal for caught behind off Trent Boult, only for umpire Richard Illingworth to refer the decision himself. Having effectively abdicated responsibility for a verdict of his own, he offered a sheepish ‘soft signal’ in the bowler’s favour.

That was promptly overturned, the right verdict as UltraEdge showed no contact, but the drama around every potential Kohli dismissal was once again in full evidence.

The day began under ominously leaden skies, Williamson enthusiastically asking India to bat first only to be repaid by a sloppy first hour from his new-ball bankers, Boult and Tim Southee.

In English conditions that batsmen dread the Kiwis allowed 41 runs in the first hour, with Rohit Sharma and Shubman Gill only prevented from doing further damage by a sluggish outfield.

New Zealand were dragged back by Kyle Jamieson, who settled instantly into a troubling line and length and walked off in the evening with immaculate figures of 14-9-14-1.

Gill wore one vicious lifter in the helmet, while the dangerous Rohit (34) simply lost patience and nicked an outswinger to the diving Southee. After 20 overs and 62 runs scored, it was a much-needed breakthrough.

Neil Wagner was the fifth New Zealand bowler to get his hands on the Dukes ball but needed only three deliveries to what the others could not, flicking the edge of Gill’s bat to send him back for 28.

From that point, almost nothing came easily for the batsmen. With Jamieson pointing the way, the rest of the attack levelled up and began asking all the right questions. After taking lunch at 69 for two, India added another 51 in a fiendishly tricky afternoon session as Kohli and Cheteshwar Pujara dug in.

The latter did not get off the mark until his 36th ball, was hit on the head by Wagner and eventually fell for eight as Boult trapped him lbw, but Kohli was intent on sticking around.

is first scoring shot had been a sweet hit through cover for four but that proved something of a red herring as he favoured blocks, leaves and gentle dabs to keep the score ticking.

For a player with so many flourishes at his disposal, this was a fighter’s knock and the lack of any further boundaries did not ruffle him whatsoever as kept his technique compact.

In Ajinkya Rahane (29no) he found a diligent support act, and the pair knuckled down for the remainder of a disjointed day.

The tea break came 15 minutes early as the Illingworth and Michael Gough took an overly cautious approach, a trend that continued as the players were ushered off after two more mini sessions.

The frustration of the 3,200 fans in attendance was not hard to hear and with just 64.4 overs possible out of a scheduled 180, even a reserve day may not be enough to avoid the title – and the GBP 1.74million prize pot – being split.