Warner: My little mate was watching 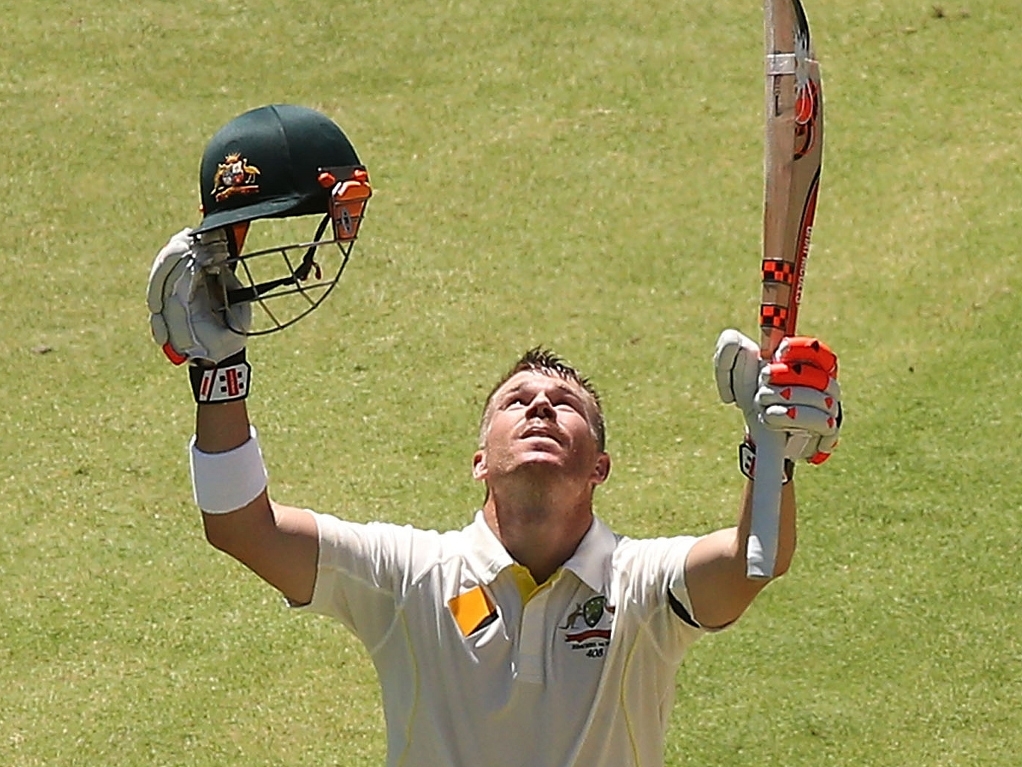 David Warner has described the century that he scored on Tuesday as probably the best he will ever score in his career, as Australia reached 354 for 6 at stumps on day one of the first Test against India in Adelaide.

His innings of 145 came just two weeks to the day when Warner was fielding and Phillip Hughes was fatally struck in the neck by a bouncer in a first-class match in Sydney, and collapsed.

Hughes passed away two days later, after not regaining consciouness following emergency surgery. The Adelaide match was marked by various tributes to the fallen 25-year-old.

Warner said:  "I think this is going to be the best of my career. Hopefully I can score some more, but I think that's going to stick with me for the rest of my life.

"I had a gut feeling that my little mate was down the other end with me the whole time from ball one. Up the other end laughing at me about all the support and all the people who've sent their messages down to him."

Hughes was on 63 when he got the blow in the neck and Warner said when he reached the same score, he became quite emotional and needed to gather his thoughts.

"So I wanted to try to get past that, it was quite tough when I was on 63 to get that momentum. (captain) Michael (Clarke) asked me at the other end if I was okay, I had to step away for a couple seconds there to get my thoughts and my process back again."

There was also applause from the crowd, as if they scored a century, when Warner and Steve Smith reached 63 on an emotionally charged day at the newly renovated ground.

Warner said: "It's going to be with this generation for the rest of our lives and careers.

"A lot of people will probably raise their bats at 63, but in the back of our mind we're always going to look up there and know he's looking down on us. I'm going to carry it for the rest of my career, I know that.

"It's going to be with this generation for the rest of our lives and careers. A lot of people will probably raise their bats at 63, but in the back of our mind we're always going to look up there and know he's looking down on us. I'm going to carry it for the rest of my career, I know that."

Warner admitted that the build-up to the Test had been difficult. After the funeral, their were no serious discussions about playing and he struggled for the first few training sessions to get going again.

He said: "The first net session I walked out of I was nowhere, so I went out and bowled to the guys, I just felt I had to do something and I didn't just want to linger around and take in the emotions.

"I went and faced the net bowlers the next day I think I lasted two or three balls and went and had throw-downs. It's one of those things where you've got to keep soldiering on and do your best. We know he's always going to be with us.

"I'm proud of the guys to actually walk out there and play today. It's been a very tough week and a bit. The guys were talking about not coming out, and all of us actually getting there, taking the field and uniting as one that was probably the proudest moment for me today."

Warner's innings was characterized by his usual attacking style as India's bowlers played to his strength's: short and wide, and he certainly made them pay before the bowlers, and Warner, settled down before lunch.

The Left hand opening batsman said: "I think the initial part before the game started my emotions took over and I found it quite hard when I came off there to regroup a little bit.

"Then I just played on my instincts and I think it showed the adrenaline was pumping and I slowly gained back that momentum and pulled it in a little bit because I knew I had to survive and get through to lunch."

Warner felt he should not celebrate his century but remembered the jovial character of Hughes.

He explained: "It was in the back of my mind whether I should celebrate or not, but I know what Hughesy's like and he'd always say to keep jumping and keep doing what I do. I dedicate the hundred to him, and Michael said he'd be proud of us both out there, and try and get on and win the game."