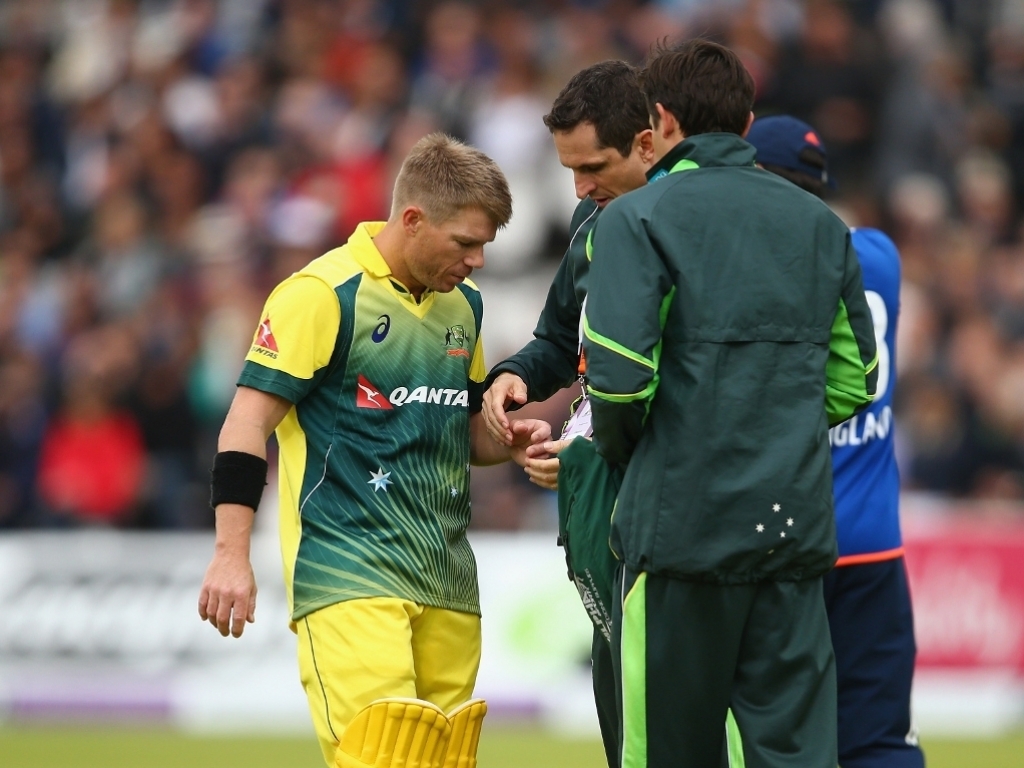 Australia opener, David Warner, suffered a painful blow to his finger during Australia's victory over South Africa on Saturday.

Warner was forced to leave the field after injuring his finger attempting to take a catch during South Africa's chase, but the opener feels confident that he will be fit to face the West Indies on June 15.

The man of the match from Saturday's game told press shortly after the contest in St Kitts: "The finger is quite sore,

"We'll keep assessing it over the next 24 hours. It's quite painful. To me it's just got the same bruising marks as a normal bung on the finger does. I'm always hopeful.

"A sore finger is not going to stop me but if it's broken, that might.

"I was a bit hesitant. When I first looked at it, it didn't look too good. It had that sort of purple mark on the nail. But it doesn't feel like the thumb … I've broken the thumb twice, I know what that feels like. Hopefully, I'm being positive, and there's not too much damage."

Warner's innings of 109 stood out on a day when batsman seemed to show a lack of patience on the small Warner Park ground, Warner scored at a healthy rate but played a smart knock, scoring more than half his runs in ones and twos and resisting having a go when it wasn't needed.

The left-hander said of his innings: "It's always challenging when you play on these small grounds, because in the back of your mind you've got to take the ego out of it,

"When you're in, you can feel like you can hit every ball for six. But once that ball got older it was harder to bat. It was actually quite hard to free the arms. You've got to try and get yourself in and be positive.

"The boundaries are always going to come if you're being positive, looking with intent to hit the ones and twos. That's the most important thing about this game, is rotating the strike. There's four fielders out until the last 10, you've just got to make the most of it until you get into there."

By contrast South Africa's batsmen appeared intent on throwing their wickets away with all five of the top five batsman getting a start only to lose concentration and play poor strokes.

The Australian opener is the leading runscorer in ODIs this year and looks to be the most consistent batsman in any of the squads contesting the triangular series in the Caribbean. Australia will hope he is fit when they take on the West Indies in Basseterre on June 15.